2. The Influence of Runge’s Ideas

Runge’s Der Kleine Morgen as an example of Wahre Kunst

Runge’s ideas should not remain mere theory. The painting Der Kleine Morgen (fig. 2) illustrates both his religious perspective of Wahre Kunst and his Farbenlehre. The esoteric impact of this painting has long been neglected by art historians.11 At this stage, I would like to give a short summary of its esoteric meaning. 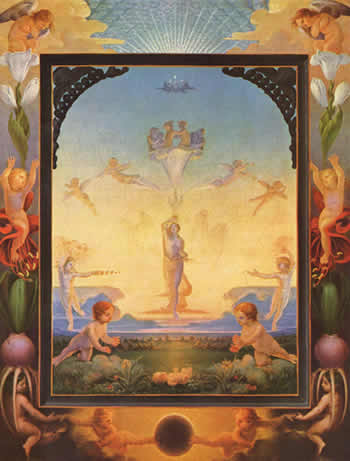 The painting consists of two separate parts, an interior and an exterior painting or “frame” that are connected to each other. The interior parting is dominated by a female figure that has often been interpreted as “Venus” or “Holy Mary”, while the child has been seen as “Eros” or “Jesus Christ”.12 Taking the exterior painting, I believe that the painting illustrates the Golden Age before the fall into matter as it is described in Jacob Böhme’s Aurora. The female figure illustrates Sophia, the divine wisdom while the child stands for the first man, the androgynous Adam. The idea of light, the fiat lux, is central to the painting. The top part is held in transparent primary colors, while the foreground already shows non-transparent features. The central axis of both the interior and the exterior picture is light and can therefore be understood as God (and his “female part” Sophia) being the central axis of all. The obvious reflection of light on the child’s body is mere a combination of internal and external light, of the sun and the divine glimpse inside the child.

The frame illustrates the fall into matter and the salvation of nature. At the bottom, the sun is darkened and two children – male and female – are fleeing from it, heading toward two other figures in the corners. Those are trapped under the roots of a plant, showing the entrapment into matter and their bodies fail to show the inner light. It is important to state here that even in this dark corner Runge does not use black, but only a very dark brown. He shows that, even in the darkest place, black (or evil) has not succeeded in taking over the world and that there is still hope for salvation.

Thus, the plant grows upwards, toward the lighter spheres and the red flower of the amaryllis bears a child, raising its arms. Its body reflects the light of the inner painting, the light of Sophia. In the top part of the frame you can see a lily and a winged child kneeling on its blossom. It has lost its sexual features and is bowing towards the top center of the exterior painting: Rays of light surrounded by small heads are reflected on a blue background. Taking the copper-print version of Der Morgen into account, which can be understood as an earlier work on the same theme, these rays symbolize God (fig. 3). In the copper-print, Runge uses the Hebrew name, while in the color version God “loses” his specific Jewish-Christian connotation and becomes a universal concept. 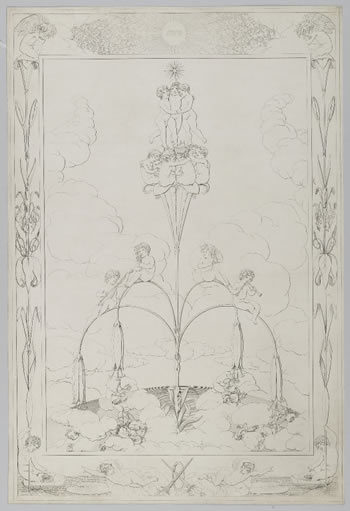 In this painting, Runge uses not only his Farbenlehre to illustrate Jacob Böhme’s concept but also a wide range of symbolic features such as flowers,  music and children in various positions, which cannot be discussed here in detail. Thus, taking Jacob Böhme’s writings into account provides the most important key to a holistic understanding of this painting. Most interpretations tend to neglect certain aspects, especially the connection between the exterior and interior painting. By concentrating on specific Christian iconographic symbolism, they risk providing a limited and therefore insufficient understanding of both the artist’s intention and the esoteric, religious and philosophical ideas of that time.

The continuity of Runge’s ideas

Both Träger and Matile state that Runge’s esoteric and theosophical ideas of art mainly continued in the art of the turn of the 19th - 20th century, focusing on the origin of color, its meaning and aesthetic effect.13 Matile claims that Runge’s popularity with some artists is due to their disapproval of the physical explanation of color.14 I would like to give some examples of the similarities between Runge and modern artists and raise the question whether the religious compound of these art theories is a distinctive dogmatically Christian one.

In Paul Cézanne’s (1839-1906) opinion, it is only color that brings life to things since the artist would fail in picturing the sun itself.15 Color reveals the true nature of things – in esoteric terms: the divine origin – while the surface only reflects their divinity.

Color is understood to be a place where soul and religion meet, where a distinctive religious, but not necessarily a Christian feeling is created.16 The importance of imagination and its psycho-spiritual content can also be traced in Franz Marc’s (1880-1916) ideas. He believed that there is no real and pure art without religion.17

The “religious” component is certainly most evident in Wassily Kandinsky’s (1866-1944) view. Art is seen as the expression of the vibrant human soul, its divine origin, which communicates with others. In his writing Über das Geistige in der Kunst (1912) he claims that the immovable (unbeweglich) character of grey is due to its mixture of the two non-colors black and white. While white is perceived as a potential nothingness that existed before the creation of all things and in which all material colors are dissolved, black equals nothingness without any potential, death and an eternal silence without hope. The mixture of both symbolizes the balance of the two forces of good and evil, and depending on their proportions it  symbolizes hope and freedom.18

The freedom of art and its creator is also important for Kandinsky: The artist is free to create whatever he wants to, as long as it reflects his inner necessity and genuineness, his inner being. This principle does not only embody the principle of art and esthetics, but of life in general.

Only art founded on this principle is esthetically beautiful and something worth striving for. The revelation of the inner force, the divine spirit, is therefore Kandinsky’s most important request. His belief that only imagination creates perfect art comes very close to Runge’s romantic idea of Wahre Kunst. In fact, he does not oppose being called a Romantic as he is convinced of participating in building a new spiritual era (“Epoche des Großen Geistigen”19), a Golden Age such as Runge had demanded a century before. At this stage, it would be quite interesting to investigate the influence of Rudolf Steiner and the Theosophical Society on Kandinsky’s view, but that would be getting too far away from the issue, even though Böhme has often been characterized as an early theosophist.

Wassily Kandinsky is certainly one of the best examples to prove that some of Runge’s spiritual ideas continued to exist in the 20th century – and were supported by aspects of other esoteric schools. However, I believe that he is not the only one. The term “religious” cannot and must not only be applied to strict Christian dogmas. The European History of Religion (Europäische Religionsgeschichte)20 proves that there have been major influences by non-Christian ideas, which have been adopted by religious philosophers, scientists and artists of the Fine Arts alike. Philipp Otto Runge’s life and works are not fully accessible without the knowledge of Jacob Böhme’s writings. Therefore, it is necessary to include the influence of esotericism in art history in order to review the understanding of the so-called “Christian” terms such as “God”, “Spirit(ual)”, “Soul”. “Nature”, etc. and provide a holistic understanding of an artistic work.

1 The works by Matile (1973) and Möseneder (1981) can be considered as exceptional. Matile, however, focuses on the Farbenlehre and its art-historical context, while Möseneder examines the influence of Böhme on several features of two paintings by Runge.

3 Still, it seems that Runge might never have read Newton’s works, even though he was quite interested in the historical and current developments in his field. The probable ignorance is unfortunately due to his insufficient knowledge of foreign languages, physics and chemistry. Runge 1978, pp. 195 and 185.

11 As far I know, there are only two articles dealing with Boehme’s influence on the symbolic significance of Der Kleine Morgen. Möseneder (1981) concentrates on the figurative elements, especially on the female figure that he interprets as Böhme’s Sophia. For a more holistic interpretation of Der Kleine Morgen including the Farbenlehre and the copperplate version, see Öhlenbach (2005).