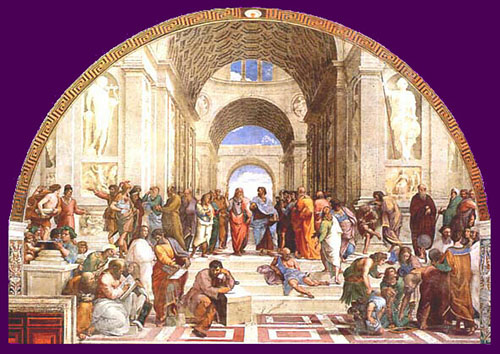 It is generally agreed that philosophy began in the Western world in Greece with Thales of Miletus (6th cent. BCE). He is credited with accurately predicting an eclipse, which suggests that he had made a careful study of astronomy. We have only fragments of his cosmological speculation, so we are not absolutely certain what some of his cryptic statements mean, but he claimed that the basic element from which all other elements are derived was water. This spurred alternative suggestions about the primary stuff of the world (air, fire, atoms, etc.) from other pre-Socratic philosophers, including PYTHAGORAS’ (ca. 582 – ca. 507) claim that it was not an element, but number or proportion. A change in emphasis came with the Greek Sophists, a group of professional teachers who trained students in various rhetorical devices to help them win court cases. Because some of these rhetorical devices were clearly fallacious, they have been immortalized in the words “sophistries” and “sophistical.” Socrates (470?-399 BCE) was distressed by this trend, shifting the topic of philosophy to ethics and politics. His principal pupil, Plato (427?-347 BCE), did the same. Plato’s most famous pupil, ARISTOTLE (384-322 BCE), broadened the scope of philosophy to cover all these subjects, and more. One of Aristotle’s most enduring contributions was a systematic development of formal logic, which was only superceded in the latter part of the 19th century.

Some of the post-Socratic philosophers of Greece and Rome had an influence on early Christian thinkers, especially Augustine (354-430). Plato’s influence can be seen in Medieval Christian philosophers up to the 13th century when Aristotle was rediscovered through the writings of Muslim philosophers, such as Ibn Sina (980-1037), whose name was Latinized as Avicenna, and Ibn Rushd (1126-1198) or Averroës. St. Thomas Aquinas (1225-1274) was the principal heir to this rediscovery, seeking to justify faith through reason. But it was not until the Renaissance that philosophy began to be divorced from Christian apologetics.

Most historians date the beginning of modern philosophy with Rene Descartes (1596-1650), though some would trace it back to Francis Bacon (1561-1626). Both were interested in the newly developing sciences and contributed to philosophy of science as well as to other fields. In fact, all of the major Rationalists — Descartes, Baruch Spinoza (1632-1677), Gottfried Leibniz (1646-1716) — were scientists and mathematicians as well as philosophers. A departure from Rationalism began in England with the Empiricists: Thomas Hobbes (1588-1679), John Locke (1632-1704), George Berkeley (1685-1753), and David Hume (1711-1776). It was the German philosopher Immanuel Kant (1724-1804) who sought to reconcile the two approaches. His successor, Georg Hegel (1770-1831), developed philosophy in a dialectic, transcendental idealistic direction, which influenced Karl Marx’s Dialectical Materialism, and continues to influence Continental philosophers of the 20th century (in a movement called Phenomenology), just as Empiricism continues to dominate Anglo-American philosophy. German Romanticism, associated with Johann Fichte (1762-1814), Gotthold Lessing (1729-1781), Friedrich Schelling (1775-1854), and Arthur Schopenhauer (1788-1860), had some influence on American Transcendentalists, such as Ralph W. Emerson (1803-1882) and Henry David Thoreau (1817-1862). But another American development, which proved more influential, was Pragmatism. It is associated with C. S. Peirce (1839-1914), William James (1842-1910), and John Dewey (1859-1952); some would classify the French philosopher Henri Bergson (1859-1941) in that category as well.

Scientific approaches to an understanding of the world gave rise to materialism among the French Encyclopedists, such as Denis Diderot (1713-1784) and Jean-le-Rond d’Alembert (1717?-1783). But it was Charles Darwin (1809-1882) who strengthened the movement with his attempt to explain the evolution of life by purely material means and chance mutations. This found its sociological application in Herbert Spencer (1820-1903) and its philosophic development in the positivist movement of August Comte (1798-1857) and Ernst Mach (1838-1916). These, combined with logical developments of Gottlob Frege (1848-1925), Bertrand Russell (1872-1970), and others, gave rise to Logical Positivism in the Vienna Circle (M. Schlick, F. Waismann, O. Neurath, R. Carnap, H. Feigl, K. Gödel, etc.). They, in turn, influenced British philosophers such as Gilbert Ryle and A. J. Ayer and German philosophers such as H. Reichenbach, C. Hempel, and K. R. Popper. They also had a profound impact on American philosophy when many of them emigrated to the United States during the rise of Nazi Germany. Logical Positivism was eventually rejected, but its influence continues in the 20th century as scientific empiricism, which has a strong materialist bias. The contribution of Frege, Russell, Carnap, and others to the development of logic in its modern symbolic form also continued throughout the 20th century. An important influence on the Vienna Circle was the Austrian mathematician, architect, and philosopher Ludwig Wittgenstein (1889-1951). However, after contact with common sense philosophers, such as G. E. Moore (1873-1958) at Cambridge University, Wittgenstein rejected his earlier approach to philosophy and reformulated his ideas by investigating language. This spawned a “linguistic turn” in philosophy, perhaps the most noted exponent being the British philosopher John Austin (1911-1960). All these various approaches to philosophy continue to influence philosophers throughout the 20th and into the 21st century.

Theosophical writers, as might be expected, tend to focus on those Western philosophers whose views most closely correspond with their own, such as Pythagoras, Plato, Plotinus, Spinoza, and Leibniz. In Isis Unveiled and The Secret Doctrine, however, Helena P. BLAVATSKY refers to a large number of other Western philosophers, commending some for their views and taking issue with others, such as the materialists. There is no discussion of the developments in logic over the centuries, although obviously basic logical principles of consistency and non-contradiction are assumed by all Theosophical writers.