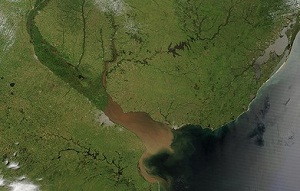 In 1921, Annie Mennie Gowland, born in England but residing in Buenos Aires, capital city of Argentina, started visiting Uruguay to lecture in various parts of the country. In Montevideo, she stayed in the Alhambra Hotel and gave lectures in its main hall. Consequently, the Bhakti Marga Branch was founded, followed by the Leadbeater Branch. Sophia Branch, which had been dormant, was revived, and the following new Branches were formed: Gowland, Morya, Ariel, and Gautama.

In 1923, the Hiranya Branch of Montevideo operated as part of the Theosophical Society in Argentina. One of its members, Juan Geis, helped to form the “Centro Libre de Estudios Teosóficos” (Independent Center of Theosophical Studies), which met in the headquarters of Círculo de la Prensa (Press Center), a highly respected organization.

On November 7, 1924, members of the above-named Lodges applied to Annie Menie Gowland for a Section Charter as the Theosophical Society in Uruguay. The application was sent to Adyar, and the Charter of the Theosophical Society in Uruguay was issued on January 5, 1925, signed by J. R. Ciria on behalf of President Annie Besant. The Charter listed the following Branches, with the names of their Presidents: Ariel, Mario Radaelli; Besant, Washington Zarza; Bhakti Marga, Enrique Dieste; Hiranya, Juan Geis; Krishna, Fernando Casanova;
Leadbeater, Doroteo De La Sierra; and Sophia, Constante Corso. After many years of activity in a rented place, the members were able to buy an old two-story building in the central part of Montevideo. Although it needed repairs, it accommodated the Section’s library, a hall for public lectures, a kitchen for vegetarian meals, and a back garden. In spite of its present centralization in Montevideo, the Theosophical Society in Uruguay has had, and still has, members who reside in other cities and in the countryside who work to spread Theosophical teachings.

Since the celebration of the centennial of the Society in 1975, the work carried out in lodges and through lecturers has transmitted the new spirit in the orientation of the movement which was introduced in the last quarter of the twentieth century. The Theosophical Order of Service has been active, mainly through the regular work of two groups: the Healing Ritual and Circles for Peace. The Theosophical Society in Uruguay or its members have published several magazines, synthesizing culture and spirituality. Theosophical lecturers often come, particularly from Argentina and Brazil. Those two Sections also participate with the Uruguayan Section in holding events in Montevideo as well as elsewhere in Uruguay.

In 1975, a weekly radio program broadcast was started reaching almost the whole country and part of Buenos Aires city in Argentina. The name of the program was “For a Better World.”  After twenty years of broadcasting, the National Committee of the TS took over responsibility for the program, but unfortunately after a short time, that work stopped.

The T.S. Library is considered as one of the most important on spiritual and esoteric topics in Uruguay, receiving requests from many parts of the city and also foreign countries. Members can visit it to borrow books and the general public can use it to read books, free of charge. It has publications from 1895, Theosophical magazines from many parts of the world, special sections in English, French, German, Portuguese and even The Secret Doctrine in Russian. It has about 5,000 books and other publications collected from 1895 to the present time, audio cassettes containing lectures and music, and a collection of video cassette recordings on Theosophical and related subjects.

After membership declined, the National Section charter, was replaced by a certificate of Regional Association issued on 20 April, 2000. In 2012, only five Lodges remained, meeting regularly once a week, with public lectures on Saturday evenings. The Theosophical Order of Service is active helping the community in several ways, as well as members who face difficult circumstances. The Section also offers classes on vegetarian cooking two days a week. The income from those classes covers the expense of the materials they use. These classes provide cooked food for all who attend them.

Thanks to Dolores Gago

We have 565 guests and no members online