(1912-2001). Prominent member of the Theosophical Society - Adyar. Hoskins was born December 23, 1912, in Florence, Italy. She was one of twins born to Richard and Ida Hoskins. Her twin sister was named Aglaia. At the outbreak of World War I the family was repatriated to Britain in August 1915. 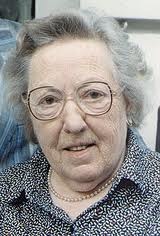 Hoskins retired from teaching in her mid-fifties to devote her time to her Theosophical work. In 1968, 1970 and 1993 she was Director of the School of the Wisdom at the International Headquarters, Adyar, and conducted courses in 1983, 1986 and 1989 at Krotona, California. In 1982 she helped to launch the European School of Theosophy at which she served as an instructor every year until the late 1990s. Being fluent in English, French, Spanish and German she was welcomed in many countries as a speaker for the Theosophical Society.

She was a keen exponent of Raja Yoga and published a book on the subject entitled The Flower of Yoga. Hoskins served for a number of years as General Secretary of the English Section.

She died in London and her body was cremated in Eltham Crematorium, South London, on September 20, 2001.