(1870-1952). Italian educator and Theosophist who was born at Chiaravalle near Acona on August 31, 1870. She gained her degree in medicine from the University of Rome in 1894, the first Italian woman to do so. She also earned a degree in literature. As a doctor, Montessori became involved in the treatment of children with disabilities and devised a special method of treating and educating them. Her method soon proved suitable for more general application and became known as the Montessori Method. 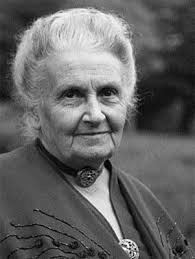 During the First World War, Montessori, who was then in India, risked internment as an enemy alien and was given sanctuary at the Theosophical Society (TS) headquarters at Adyar near Madras (now Chennai). She died at Noordwijk, Netherlands, May 6, 1952.

Montessori’s method of education focused on two essential elements: gaining the sustained interest of the child by the provision of various educational items that have significance in developing skills and also allowing the child a considerable degree of latitude for individual choice of study. Under her method, children learn to read, write and count before they are six years of age. Montessori Schools have been established in many countries and flourish to the present time. Her last book, The Absorbent Mind (1949) was devoted to the education of children under the age of three years and a book published a year earlier, To Educate the Human Potential, demonstrated the value of teaching children about pre-history.