Argentine journals by their years of initial publication have been 1895: Luz Astral; 1898: Philadelphia; 1905: La Verdad; 1912: La Estrella De Occidente; 1913: La Cruz Del Sur; 1917: Ondas Buddhicas; 1919: Teosofia En El Plata; 1944: Revista Teosofica Argentine; 1958: Teosofia; 1972: America Teosofica; 1981: Informativo Teosofico; 1990: Cambios. Since 1947, a Spanish translation of The Theosophist has been published and distributed to all Spanish-speaking countries. From 1947 to about 1966, almost all the articles published in The Theosophist were translated and republished in this Spanish-language journal.

This translation project was coordinated, and most of the translations made, by Mr. Salim Webber from the Lodge in Río Cuarto City. The magazines once published were delivered under subscription. Then in 2006 a project was accepted by the National Assembly for translating into Spanish The Theosophist and other English Theosophical literature. The Project started with Elaine Grassano and Alicia Salinas from Córdoba city translating the articles and making tlhem available through the Argentine web page: www.sociedad-teosofica.com.ar. Though the group of volunteers who are part of the project has varied in size over the years, it continues and is being improved little by little.

In 1954 there were 65 Lodges, 98 groups, and 1531 members. In 1992 there were 500 members, working in 28 Lodges in Argentina and one Lodge in Paraguay. Premises in the following cities belong to the Section: Buenos Aires, Rosaria, Cordoba, Mendoza, San Rafael, Carlos Paz, Mar del Plata, Rio Cuarto, San Lorenzo, and La Plata. The General Secretary and the National Council work in Buenos Aires. The National Journal Cambios is published quarterly and is sent to members, public libraries, schools, and universities. The Department of Information, in the city of Rosario, prepares slides, audio-visuals, and videos for rent and distribution among Lodges and for the public. Workshops and training courses are held all over the country to train members in group work, lecturing, study techniques, and research. In 1985 the Theosophical Society took part in an Educational Congress organized by the Argentine National Government, presenting a project on education based on Theosophical principles.

Since 1990, an annual international book fair has been is held in Buenos Aires. About a million people visit this fair, which provides an opportunity to sell books, distribute leaflets, and present programs. More recently, similar activities have been started in towns inland. A summer school is held for a fortnight every year, and a winter school for a week. National gatherings are held in various parts of the country all year long. Radio programs are broadcast in several cities. The Argentine Printing Press, founded in 1953, has published dozens of Theosophical books in Spanish and distributed them to other Spanish-speaking countries.

The Theosophical Center in San Rafael–Mendoza, devoted to studies, courses, and conferences, was established in 1980. Originally the land was bought as a camp site for young Theosophists, but when the first groups of trees were planted, donations started to arrive, and the possibility of having a Center emerged. After the purchase of 3.5 hectares in 1980, 7 hectares more were added. At first, it had only three trees and an old vineyard, which was completely dry; now it has about two thousand trees of different varieties. The Center is ten-minutes drive away from San Rafael city, in Mendoza, near the Andes Mountains. There are direct road and flight connections with Mendoza Capital City, Buenos Aires, and all the other big cities in Argentina. San Rafael city receives water from melted snow through two main rivers, Atuel and Diamante. Both of them provide beautiful spots especially for adventure tourists and nature lovers, winding down through mountains. Tracking, rafting, kayaking, abseiling, and other sports are done here. 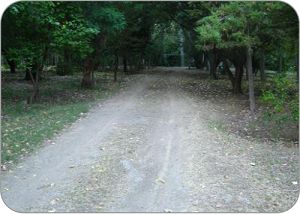 Entrance to the Theosophical Center San Rafael in Mendoza The building plan was made by the civil engineer Juan Carlos Palmeri, who at that time was General Secretary in Argentina. Though many members have made this construction possible, in 1980 Ernesto García started managing resources, and with help by his family and hard work, it became a dream come true. He was the first director of this Theosophical Center and continues in that position. Since 1980 Theosophical activities in Argentina have also been encouraged by guest speakers from abroad: Radha Burnier visited it three times, and also Seetha Neelakantan, Betsan Coats, Ianthe Hoskins, P. Krishna, John Algeo, Nelda Samarel, Pedro and Linda Oliveira, Ricardo Lindemann, and Vicente Hao Chin Jr. (www.sociedad-teosofica.com.ar/ct/index.htm) At present the projected five-wing star-shaped building has four wings finished. They include twenty-four dormitory rooms with bathrooms, dining room, lecture room, library, book-shop, and a silence and meditation room. Summer and Winter Schools of the Argentine Section are held here. The programs are attended mainly by Theosophists and other spiritual seekers from Argentina, Chile, Uruguay, Paraguay, Bolivia, Peru and Brazil.

Young people have taken an active part in the Argentine Section from an early time. In 1962 an Argentine Federation for them was formed, and in 1973 an Inter-American Federation was founded and was active for several years. The main characteristic of this youth movement is that it is not separate from the Section’s activities but participates actively in everything carried on by the national organization. A Round Table was founded in 1905 and is still working in several cities. The Theosophical Order of Service has also been working in Argentina for a long time.

The South American Federation, which functioned between 1930 and 1962, held its first congress in Argentina in April 1930. The idea of a federation that included the whole of the American continent was cherished by Argentine members. Juan Vinas, a well-known lecturer, started traveling through various countries in order to strengthen the links between them. Finally, when the Inter-American Federation was formed in 1972, Luis Spairani, from Argentina, was elected as its first president. He gave the Federation a strong impulse which set the direction of the work in the years to come.