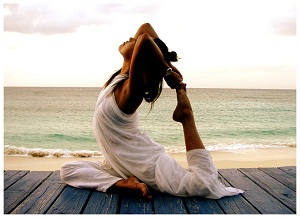 Yoga permeates all the religious and mystical philosophies of India. Although it has mutated from its original form, its essential theme and objective, as enshrined in the teaching of Patanjali, have remained intact: the union of individual consciousness with the Divine. H. P. BLAVATSKY offers an interesting definition of yoga in the first issue of the magazine The Theosophist (pp. 29-30) in which she writes, “The whole object of the Hindu yoga is to bring into activity his interior power, to make himself ruler over physical self and over everything else besides. That the developed yogi can influence, sometimes control, the operations of vegetable and animal life, proves that the soul within his body has an intimate relationship with the soul of all other things.” This is a deceptively simple statement which conceals a profound philosophy, namely, the essential unity of all things at a certain subtle level.

Blavatsky wrote at a time when knowledge of the various yogas was negligible in the West and very little literature was available in English. When asked, “Is the practice of concentration beneficent?” Blavatsky replied, “Genuine concentration and meditation, conscious and cautious, upon one’s lower self in the light of the inner divine man and the Paramitas (highest ideals of spiritual perfection) is an excellent thing. But to ‘sit for yoga,’ with only a superficial and often distorted knowledge of the real practice, is almost invariably fatal; for ten to one the student will either develop mediumistic powers in himself or lose time and get disgusted with both practice and theory” (CW 12:603-4). It is obvious from the context that Blavatsky did not mean that the word “fatal” should be taken literally.

In THE SECRET DOCTRINE (1:95), Blavatsky writes, “The Hatha so called was and still is discountenanced by the Arhats. It is injurious to the health and alone can never develop into Raja Yoga.” Since she wrote that in 1888, there has been a very great increase in the practice of hatha yoga in the West, with many organizations training hatha yoga teachers to a high standard of proficiency. The beneficial results achieved have been demonstrated beyond question, and many medical practitioners suggest that patients “take up yoga.” Many branches of the Theosophical Society now offer regular classes in hatha yoga. Blavatsky frequently mentions raja yoga in approving terms, but does not, in her writings, go into detail regarding the teachings of Patanjali, possibly because she held to the view that a superficial treatment of the subject is undesirable and even harmful. In her Practical Occultism (TPH, Adyar, 1959 ed., pp. 8-9), she writes of, “. . . the enormous, almost limitless, responsibility assumed by the teacher for the sake of the pupil . . . from the moment they begin really to teach, from the instant they confer any power — whether psychic, mental or physical — on their pupils, they take upon themselves all the sins of that pupil, in connection with the Occult Sciences, whether of omission or commission, until the moment when initiation makes the pupil a Master and responsible in his turn.”