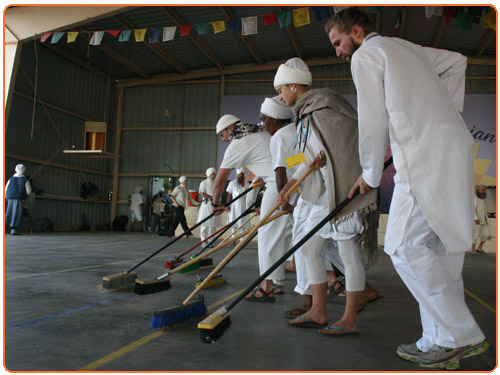 Karma-yogis (practitioners of karma yoga) are content with whatever life brings them, knowing that the law of karma will always provide them with what is deserved and that all of life’s experiences provide opportunities for learning and making spiritual progress. This attitude of mind is exemplified by the following story. A monk lived a solitary life in a vast forest. He was often on the verge of starvation and was frequently ill. His appearance was that of a bundle of bones in a wrinkled skin bag. One day, in his meditation, he was visited by a celestial being who asked him how he was getting along. He replied that he was doing very well, but would like to know how many more lifetimes he would have to live in order to achieve enlightenment. “As many lives as there are leaves in this forest,” came the reply. “So soon!” exclaimed the monk.
The philosophy of karma yoga may be summed up in a few words: grateful acceptance for whatever life brings, quiet contentment, nonattachment, and selfless service. This attitude is sought by attuning one’s consciousness to the level of BUDDHI, which is said to be one of extreme bliss in which one’s consciousness is not focused on one’s ego, but it is universalized, in touch with all life. This condition may be reached it is said, by living only in the present moment, performing all actions, no matter how apparently trivial and mundane, as skillfully as possible but with detachment and close attention to what one is doing. It is also important to develop a sense of moderation — in one’s diet, one’s possessions, even one’s sleep — so that one does not develop attachment, even subtle, to any object, person, or behavior.