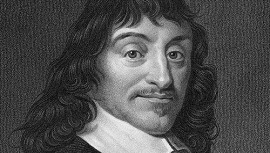 Knowledge, as we know, was limited in the Renaissance. Where today it would be quite impossible to study all the major fields of knowledge, it was no so centuries ago. Descartes studied in a Jesuit school in his youth. The Jesuits were renowned as scholars; having a Jesuit education was the best for which one could hope. Descartes, however, did not just master the subjects he was being taught, but having done so spent his free time in the Jesuit library. By the time he was in his late teens, he had read everything in the Jesuit library and knew everything there was to know--literally.

Knowing everything, Descartes decided to give up the scholar's life and live a little. So he did what many young men were then doing: he got involved in the war. Descartes, though, did not choose a side. Instead, he became a mercenary and fought on both sides of the war just for the fun of it. Indeed, not only did he know everything, but he also happened to be one of the finest swordsmen in France.