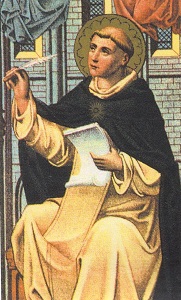 When Aquinas was a student, his reserved demeanor kept him from participating in class discussions. Rather than assume shyness or meekness, the other students presumed Aquinas was simply stupid. In the Middle Ages, when noblemen frequently placed their children in monasteries or universities by force of position, it was common to have relatively unintelligent people even in university. This way Aquinas earned the nickname "the dumb ox," referring, of course, to his size and silence. Another student, taking pity on Aquinas, offered to aid Aquinas with his logic work. Aquinas accepted out of meekness. As the student attempted to demonstrate various rules of logic to Aquinas, he found himself being corrected by Aquinas. The student soon caught on and left Aquinas alone.

We have 397 guests and no members online