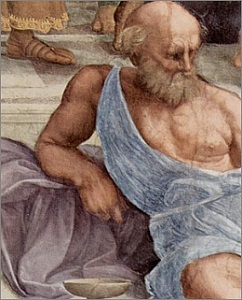 Also known as 'the Cynic,' Diogenes was the major follower of Antisthenes, who had invented cynicism as a philosophical movement. Cynicism demanded extreme detachment from society and its rules, living according to one's reason. One way Diogenes used to scandalize the Athenians was to eat in the Agora. Any bodily function was expected to be confined to the home, where no-one else need see it. Going one beyond this, Diogenes was once found masturbating in public. Asked how he could do such a thing, Diogenes replied, "If I could satisfy my hunger by rubbing my belly, I'd do that too."

Diogenes' fame began to spread, both as a sort of madman and as a wise man. For the latter reason, Alexander the Great reportedly came to Athens from Macedon to glean some wisdom from this eccentric philosopher. Alexander would find Diogenes in his customary place, an empty wine vat which he had made his home. When Alexander approached with praise for Diogenes wisdom and humbling himself to request audience, Diogenes replied, "Could you move? You're blocking my light."

We have 424 guests and no members online