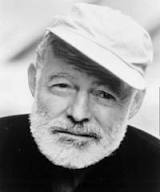 Hemingway had a son who at the age of twenty had already tried to work in many different professions. He considered himself a person with a huge life experience and decided to publish his diaries so he asked his father, already a famous writer awarded the Nobel Prize, to write a preface to his memoirs.

'After that, we'll talk about the copyright', the son added.

'My son', the writer said, 'you should know that I, as your father, own all the rights regarding your person'.