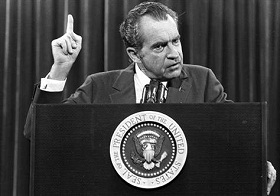 Shortly after the Watergate story broke, Richard Nixon was asked by British television interviewer David Frost to explain his approval of such illegal activities as burglary and the unauthorized opening of mail. "Well," Nixon boldly replied, "when the president does it, that means it is not illegal."