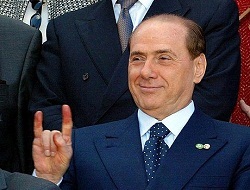 When Silvio Berlusconi became Prime Minister of Italy in 2001, he continued to run his media empire. "There are no blind trusts, no meaningful guidelines on conflict of interest," Jane Kramer, an American journalist, explained. "No culture of divestment, no legal reason for a Prime Minister even to consider divestment..."
Berlusconi had an answer for such critics. "I wanted to do it," he once declared, "but my children won't let me."