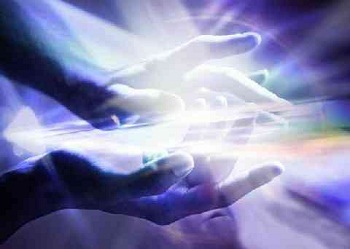 A certified practitioner of Reiki is someone who has undergone a series of specific energy attunements under the guidance of a bona fide Reiki Master-Teacher. In commencing a therapeutic session, and with a clearly grounded intention, the practitioner calls upon the energies to be present for purposes of healing. Acting as a kind of conducting intermediary to harness the frequencies - if you will - ki enters through the top of the head (crown chakra), and emanates through the palms of the hands, where it is then naturally directed to go where needed, relative to the receiving body.  All the while, the receiver is lying comfortably and fully clothed on the table. It is quite common for most clients to enter a very restful sleep state during the approximately one-hour treatment.

EVERYTHING IS ABOUT ENERGY & RELATIONSHIP;
MIND - BODY - SPIRIT ARE CONNECTED

Chakras are energy centers situated within the less dense astral body -- the ethereal counterpart to the physical.  More specifically, the astral component is the unique blueprint upon which the physical body is modeled. The chakras function much like valves and transformers, receiving and dispensing the life force that circulates throughout our being. Moreover, these mandalas of energy interact with the physical body via the endocrine and nervous systems; certain chakras are directly associated with their respective endocrine glands. For example, if one feels tightness/tension within an area of one’s consciousness, it is felt within the corresponding chakra as well, which, in turn, is experienced in an area of the body associated with that energy center (e. g., the throat chakra relative to the neck, thyroid, and expressive qualities).

Stress has long been an ever-present element of our (so-called) civilized patterns of existence.  Over an extended length of time, it tends to disrupt & weaken the flow of the vital life force within. Stress frequently is brought about by conflicting thoughts & feelings (such as fear, worry, anxiety, and anger) that become lodged within our surrounding energy field. It is very common to experience a shift in mental and emotional health before any physical changes are discerned. If a dis-eased state is allowed to continue indefinitely, it is apt to intensify until a symptom representing that state manifests at the physical level. In other words, the dis-ease almost always begins at a deeper level, eventually culminating on the physical where it finally seems to get our attention!

Scientific and medical research has long verified that uninterrupted, cumulative stress can hinder the body’s own natural ability to heal and protect itself. When Reiki is introduced, balance & vitality can begin a process of healthful restoration, because the physical, mental, and emotional effects of built-up stress are being released. Congested areas of energy can begin to gently break up, aiding in the release of toxins, and resulting in a feeling of peaceful relaxation. Think of someone who has been experiencing significant limited range of motion and rigidity within muscles, tendons, ligaments -- as the inner life force resonates to Reiki therapy, this individual may experience a potential lightening up on the mental/emotional levels, and consequently, may undergo a relative increase of flexibility on the physical level.

Reiki may effectively address such health concerns as scoliosis, arthritis, fibromyalgia, body trauma & muscular-skeletal injuries, adrenal exhaustion, nervous conditions, poor circulation & edema, digestive distress & much more. Regarding the release of cumulative stress, it is simply outstanding! This therapy is safe, non-invasive, and is continually proving to be an invaluable AND viable complement to other healthcare modalities, including traditional Western medicine. It is used in conjunction with conventional cancer treatments, and has been credited with easing the side effects of chemotherapy and radiation, decreasing pain & inflammation, improving immune function, and enhancing a positive emotional constitution. Reiki is being increasingly utilized in emergency & operating rooms, nursing homes, hospices, organ transplant care facilities, pediatric, neonatal and OB/GYN units.

THE HOLISTIC FABRIC OF THEOSOPHY

A core premise underlying the holistic healthcare model is its natural commitment to addressing the whole being. Nothing is considered to be separate. For me, the long-term embrace and practice of a holistically oriented mindset and lifestyle has been directly proportional to a nearly 30-year serious study and embrace of Theosophy. Indeed, the perennial wisdom lays groundwork for mirroring the connectivity of everything.  In hindsight, my affinity to – and active participation in - this area of health and well-being could not have come before embarking upon the Theosophical work. Indeed, the latter has been the gateway to entering into the former -- this acknowledged realization of a cosmic ordering of delving into things as they are presented at just the right moments. The holism inherent within a theosophical worldview unceasingly reflects a similar fabric in the research and implementation of classical homeopathy, Bach Flowers, therapeutic-grade essential oils, and Reiki.

I AM HONORED TO SERVE THE HUMAN, ANIMAL AND PLANT KINGDOMS

In the space remaining for this article, I would like to focus upon healing relative to animals. These wise and wondrous creatures are a particular gift of joy, especially when presented to me as an opportunity to aid in their healing. Plus, they are SO authentic; they do not seem to take on the masks and drama that we humans often tend towards doing.  What you see is truly what you get!  I have been privileged to share Reiki with a motley of critters -- everyone from ladybugs, butterflies and birds -- to cats, dogs and Arabian horses. Every time I’ve made a “house call” where an indoor cat has been present, he/she has never failed to jump up on the table and lay down on the client’s body some time during a treatment.  Felines seem particularly drawn to the Reiki energy. What follows are three experiential instances involving Reiki healing and animals.

1) JUNIOR, a female dwarf hamster, had developed a good-sized tumorous growth on one of her shoulders.  Its size was especially disconcerting, given her naturally diminutive body. Sadly, this cute little girl was on her way out, per the vet, who had actually offered euthanasia to bring a sooner release from suffering. Junior had hardly been eating and she exhibited very little energy. When I first arrived to meet her, she was half sitting-lying on the bottom of her cage, and breathing laboriously.  Clearly she was in serious distress.  She was taken from her cage and put into my hands. As I sat down on the floor with her, she started becoming rather (nervously?) active in my hands.  I kept my hands cupped and focused upon gently transmitting calming energy into her body. After what seemed like several minutes, Junior started to relax and, eventually, she went to sleep in my still cupped hands. I continued directing Reiki in and around her body as she rested in a peaceful slumber for about 30 minutes, after which, she was returned to her cage fully awake now. The last thing I remember observing before I left was that Junior appeared to be more energetic, and was headed for her treadmill. Turns out she lived nine more life-quality months, before passing on her own.

Interesting Side Note:  Time and personal observation/experience have taught me the following: when intending to treat an animal with Reiki, most of them obviously possess a life/bodily system so much smaller than that of a human being’s. As a practitioner, I came to realize the need to direct a less intense degree of Reiki towards an animal. Additionally, there have been numerous times when intuition has informed me to Not directly lay my hands upon the animal’s body, but to hold them just above the physical vehicle, directing healing to its surrounding energy field.  This is in marked contrast to administering Reiki relative to a member of the human kingdom -- taking the example of treating a woman who had been experiencing very serious, and at times, debilitating back pain for 15 years. In this case, Reiki was amped up considerably with laying of hands directly on the body, intuiting that a higher degree of energy intensity was called for. The results quite favorably reflected the quality of means employed.

2) MOLLY, a young adult female tabby, had developed a very large abscess on one side, close to her stomach. It was removed by the vet, who had stitched it up with a tiny inner drain, and sent Molly home with one of those dreadful Elizabethan collars that seem to make it nearly impossible for cats and dogs to even eat!  Healing of this tender area would require some two weeks before the stitches could be removed.  Molly was my dear friend’s cat and I wanted to offer my help. At least twice daily, I warmed up a wet washcloth, and gingerly picking up Molly, I laid her on my lap with the stitched area facing up, lightly pressing the warm cloth on this tender spot, giving Reiki all the while.  Her face told us she absolutely loved the feeling of the warmth penetrating her skin. And perhaps something more. Every time this was done, Molly would raise her paw to my face and gently press it against my cheek while looking directly into my eyes. One could not help but feel that she knew she was being cared for -- with lots of love. And she was giving it right back -- just unforgettable. I believe her stitches were able to be removed before a full two weeks had passed.

3) MONARCH BUTTERFLY. Taking a brief walk in town, I came across a monarch butterfly completely sprawled out upon the sidewalk. Kneeling to get a closer look, I spotted a tiny tear in one of the wings, which would explain why it was unable to fly. Immediately, I began to administer Reiki, still in kneeling position, my hands hovering just above the little body. (It was adequate that the ethereal field surrounding such a small body receive the healing.)  After some minutes, I picked up the butterfly, gently placing it in my hands, and started walking in search of a safer area that would be further removed from the busier sidewalk. I came to a quieter, grassy area up from the street, and intended to place the butterfly on a bush. By this time, it had perched itself on the back of my finger; as I was giving just a little more Reiki, it suddenly flew to a bush and alighted upon it. This bush was at least a couple feet from where I had been standing when the butterfly had been sitting on my finger.

Doreen Domb is a Reiki Master practitioner certified in the Usui Shiki Ryoho healing system. She has been a student and practitioner of holistic healing modalities for the past 22 years.  Along with Reiki, her ongoing studies and practice encompass classical homeopathy, Bach Flower remedies, therapeutic-grade essential oils, and astrological insights. Doreen generally serves the Sierra Nevada foothills of Northern California.  Anyone further interested in Reiki, and/or wishing to contact Doreen, is welcome to do so at  (+) (530) 273-8394, or This email address is being protected from spambots. You need JavaScript enabled to view it.