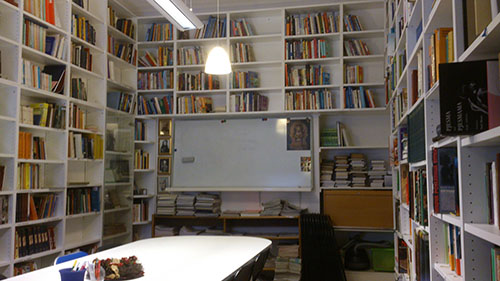 Reading room at the Theosophical library in Slovenia

The Theosophical Society Jivatma in Slovenia is operating the first public Theosophical library in Slovenia. The Theosophical Library and Reading Room of Alma M. Karlin was started in 2010 and is dedicated in memory of the great Slovenian female traveler, writer, poet, collector, hyper polyglot and Theosophist Alma Maximiliana Karlin (12 October 1889 – 15 January 1950). Between 1919 and 1928, Alma made a nine year journey around the world. She was an inspiration for many members of the first theosophical circle in Slovenia (which was part of Yugoslavia at the time) called “Krishnaji”, which started functioning in 1927 in Celje and was led by Konrad Konec, a priest in the Liberal Catholic Church (LCC).

“Alone and abandoned walks through life he who thinks only of himself; but he who knows how to lovingly adapt and turn everything for the better, who always knows where to offer a helping hand and gives himself to others, his life is a blossoming meadow, and traces of his work remain even after his death.”

The Library was established as a resource for independent research. There are over 10,000 volumes in its collection and more than 5000 of those are present only here in the whole of Slovenia. It is a unique place for resource material in the field of the Divine Wisdom. Besides the works of Alma Karlin, the library makes available to the public a great and exclusive reference collection with significant works on theosophy, philosophy, psychology, sociology, anthropology, esotericism, spiritual and personal development and the world's religions, such as Christianity, Hinduism, Buddhism, Judaism and Islam and many others. Complete collections can be seen on the site www.jivatma.si which will be translated into English in the near future. One big work in progress is to digitalize the historical material of the Slovenian TS and slowly make it easily available for researchers. Anton Rozman, through his great work on www.teozofija.info has already covered other Theosophical material. 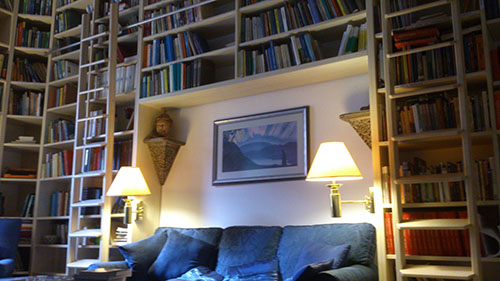 Cozy and inspiring atmosphere in the library

Also included is a wealth of material on comparative religion, mysticism, Kabala, alchemy and traditional as well as leading-edge fields of science. The reader may follow the recurrent ideas that have helped people of all cultures find a deeper meaning in life. Prominence is given to the extensive collections of world known Theosophists starting with H. P. Blavatsky, H. S. Olcott, Judge, A. Besant, G. de Purucker, C. W Leadbeater as well as J. Krishnamurti, A. Bailey, R. Steiner and others that started in theosophy and began their own teachings. We also have a wide collection from Sri Aurobindo, Vivekananda, Osho, Ramana Maharshi, Torkom Saraydarian, Lucille Cedercranz and others.

The Theosophical library also offers lectures, study groups, workshops, and other programs to members and the general public. The subject matter is a wide range to facilitate the study of comparative religion, philosophy, science and health. We have a daily Zen meditation and monthly full moon meditations, as well as presentations of books in Slovenian, and cultural evenings with music and spiritual poem readings. We also host Young Rite (Liberal Catholic Church in Slovenia) with occasional Sunday masses and a Friday evening Krishna Bhakti group, and we allow other groups to present who have a respect for different paths and who try not to be exclusive or too orthodox in their approach to understanding life.

We are grateful to all who helped us to build this library thus far by donating of books, offering lectures and supporting us in many ways. We happily look forward to the future developments of the library. And though the Theosophical Society Jivatma is not a part of any bigger Theosophical organization such as Adyar, we feel a part of the world Theosophical family and a part of the One work.