The Indo-Pacific Federation of the Theosophical Society (IPF) was held in Bali, Indonesia from the first to the sixth of November 2013. Over 90 representatives from Asia-Pacific region took part in the conference with the theme of the conference Practising Theosophy. Many of the presentations focused on answering the question of how we as an organisation and as individuals can turn the Theosophy we understand from an intellectual concept to one that informs and becomes an active part of our lives.

The conference was inspired by the words of the Mahachohan: “We have to preach and popularize a knowledge of Theosophy.” We are living in times when it is more difficult to attract new members to our meetings and perhaps the time is upon us to go where there is a need, into our communities where the popularisation of theosophical values can be a true means of change. We discussed the importance of developing Self-awareness as part of our practical approach to living, by each of us becoming an example of Theosophy, which of course requires us to bring our own lives into harmony with the universal values, such as nonviolence, honesty, respect, Brotherhood and Sisterhood and being willing to undergo our own transformation as part of this process.

Our guest speaker was Ravi Ravindra who presented three remarkable dialogues leaving us with a sense of deep reflection after each one. Ravi spoke on ‘Actorless Action’, ‘Knowledge and the State of Unknowing’ and finally on ‘ Mindfulness in Action and Mindlessness in Love’ sharing with us many insights from his dialogues with Krishnamurti. 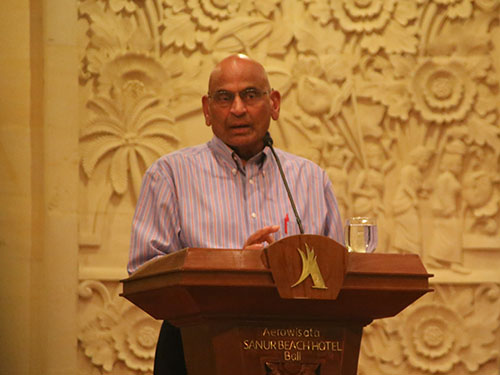 The conference emphasised the importance of discovering your ‘Inner Diamond’ through a process using nonviolence as a mechanism of practising Theosophy. Nonviolence of course is a universal truth which is reflected in many religions. It is often the first step that must be taken; as epitomised by Mahatma Ghandi and Annie Besant in their own lives. 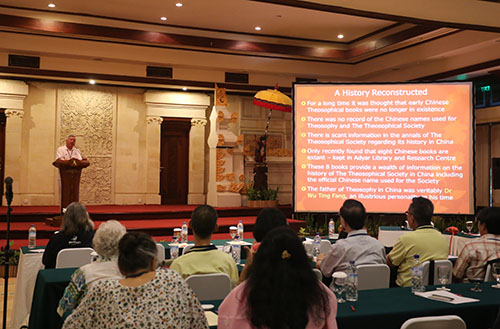 The Singapore Lodge shared with us some insights into the history of Theosophy in China which have come out of the research by a group of Singapore members on behalf of the IPF, creating an Internet presence related to Theosophy in the native Chinese language. We heard of Dr. Wu Ting Fang, a Chinese diplomat who spent much time outside of China. It was during the last three years of his life that he did the most work for the Theosophical Society while holding dual portfolios of Minister of Foreign Affairs and Minister of Finance. In 1920, aged 78, while residing in Shenjiang, Shanghai, he actively promoted The Theosophical Society. The Singapore lodge have an active group translating some of the core theosophical texts into Chinese and making these available through the project website at: www.chinesetheosophy.org

There were many other speakers during the conference including a panel of Theosophical Order of Service (TOS) speakers who spoke about how the TOS can help the Theosophical Society. The speakers discussed the importance of service as part of our journey to awaken compassion in the lives of our members. 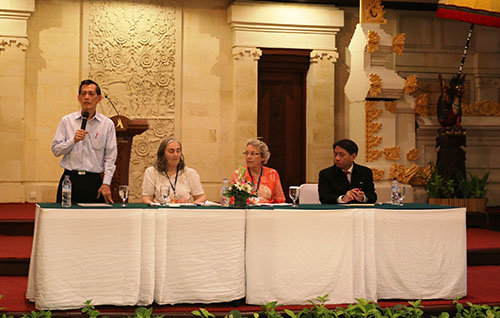 Photo takes during the TOS symposium, on the far left Vic Hao Chin

The Indonesian National Speaker shared some of the history of Hinduism in early Indonesian history highlighting some of the prominent figures of the past and how the Hindu culture of Indonesia eventually moved to Bali, which is predominantly Hindu with a sprinkling of Buddhism. This influence was very apparent as the conference took a break for a tour of part of Indonesia on one of the days of the conference.

The conference started on the day of Radha Burnier’s cremation in Adyar with many of the guests learning of Radha’s passing as they arrived. During the opening ceremony we took time to reflect on the work of Radha with short presentations by some who knew Radha Burnier well. After the presentations we had a few minutes’ respectful silence for Radha.

Photos by courtesy of Isis de Resende from Brazil