Last October, Gene Jennings, vice-president of the International Theosophical Conference Inc., while touring India, came over from New York to the Theosophical Society in Adyar, visiting TS Head Quarters for one day. He had a quick tour organized by the Theosophical Publishing House. He met with the International President, visited the Library, Leadbeater Chambers’ restaurant and Head Quarters Building and walked over Adyar beach. He is affiliated with the United Lodge of Theosophists. 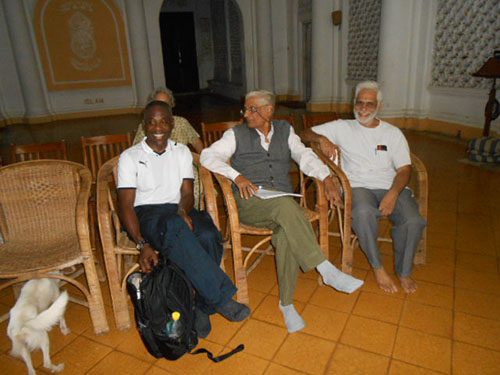 In the evening he attended a meeting of Adyar Lodge the subject of Theosophical Organizations all through history and participated in very lively discussions with some twenty people present.

After a short introduction on the different Theosophical organizations from the past, like Plato, Pythagoreans, Phylatheleans of Ammonius Saccas, Jacob Boehme etc., an exchange of opinion took place.

Gene spoke profoundly about power of the mind and awareness mirroring spirit in matter and fusing into oneness of consciousness. From his words it was clear, that he must have read many Theosophical works. His best one-liner was that he experienced the reading of The SecretDoctrine as reading poetry. This is a type of appreciation of the Magnum opus of H. P. Blavatsky which is not so often heard.

All Theosophists might consider this idea worthwhile to ponder on.

In Gene Jennings’ own words:

On a too short trip I was hosted by several gracious students at the Adyar Theosophical Society, who treated a visiting student of ULT as one of their own.

At the urging of a kind friend it was suggested that upon arrival in India I make plans to visit the international headquarters of the Theosophical Society (Adyar) at Adyar. With one phone call from that friend everything was arranged and prepared.

After briefly settling in Delhi, I continued on to Chennai, where Ramu and later Jan Jelle Keppler, both guest speakers at out last held ITC meeting in New York, graciously met me. They are longtime students of Theosophy and perfect hosts throughout my short stay that day at the Theosophical Society.

Ramu diligently picked me up from my hotel and transported me a short way to the wonderful grounds of the Theosophical Society at Adyar.

The soft colors, the spiraling trees, The Bodhi Tree, planted there, and the quiet serenity at that place were among my first awareness’s, leaving deeply felt impressions and silent longings. In the midst of the surrounding throngs of persons, loudness, hustling and bustling activities on the city streets of Chennai, just walking through the gates, one entered into what seemed to be a different time and place. What stood out most was the sense of a deep silence, and almost palpable peace, greatly conducive for study, reflection, and contemplation regarding the great concerns of life through the lens of a Theosophical understanding.

My tour at Adyar included seeing the headquarters building and hall, and aspects of the administration process that occur daily. I was graciously taken for a short visitation with Radha Burnier, the president of the Theosophical society at Adyar, who shared time with me in conversation despite her busy schedule. Although I spent only a short time with her I was able to appreciate the vast work that she has done for Theosophy and the Masters through her lectures, writings, talks and presence. I also feel somehow very fortunate that I was able to meet her before her passing, which occurred several days later.

As my tour continued I was able to see the full sized statues of H. P. B. and Colonel Olcott that were at the headquarters hall. There was also visible the Theosophical Society Plaque containing 52 branches or societies which are chartered, located in the different regions of the world. There was a freemasonry symbol directly above the Theosophical Plaque of charters, and below it the words “Universal Brotherhood”. The latter is clearly the heartfelt desire of our Great Teachers who spearheaded this movement as it relates modern day Theosophy, and who themselves belong to that greater invisible but ever present Theosophical Movement which is the deep current supporting all of humanity and life.

My tour continued and I was able to see the library through the gracious time spent with me by the librarian. She showed me both large and small relics, literary works, manuscripts that were on display, and other literary treasures contained in the Theosophical library / Research center started by the efforts of Colonel Olcott. The various databases, and variety of articles and published works, as well as other writings related to the objects of theosophy were presented and appreciated.

I was able to visit the Adyar bookshop with its many interesting works containing ideas related to many of the different spiritual disciplines, practices, sciences and philosophical studies, as well as the works of H. P. B.

As I continued my tour with Jan Jelle, looking at the grounds which included many acres, (many of which I was unable to see), I was able to appreciate the cremation site, the guesthouse where many of the visitors stay while spending time enjoying the Adyar yearly conference, the meditational center, and directly beyond the gates the great expanse of Ocean and Sky, while standing on the Adyar portion of the Beach, which was quite a sight at that time of the evening. Since the weather was good, we were able to take a short walk along the shore, which was very conducive to the arousal of contemplative thoughts.

Upon making our way back to the Theosophical Hall, I was able to participate in a very lively Wednesday evening Theosophical meeting led by two solid students of Theosophy. Although in private conversation we were able to acknowledge aspects of superficial difference in regards to the expression of certain Theosophical teachings and ideas, it does seem that we were all able to appreciate the great single spiritual teaching and the ideas that arise from it – related to the teachings of Theosophy and the expressed spiritual truths given by Madame Blavatsky and her Masters. It was a wonderful experience indeed to be involved in the class, listening to Theosophy, as well as being asked questions regarding the theme of the Theosophical Movement, and its representatives throughout the historical years and ages. It was also wonderful finding out that there is much common ground regarding Theosophical understanding, despite the appearances of differences related to particulars in regards to the core truths, expressed in the different traditions.

At the end, I found myself being very thankful to the friend who persistently suggested I visit Adyar, as well as all the spiritual friends committed to the Great Cause of Theosophy, each in their unique way, whom I was fortunate enough to encounter along this journey.

Thank you all for a gift I will eternally feel and cherish.