Educating about violence to women in Bhubaneswar, India

We are happy to announce a TOS project that we are adopting for international support over the next two years. We invite you to share the information with your fellow TS and TOS members and friends. 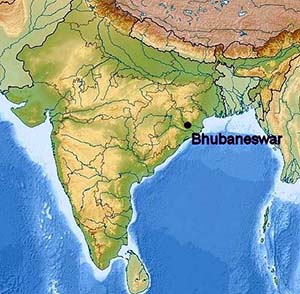 As the media show relentlessly, violence against women continues to know no boundaries. The TOS has decided to reinforce its activities to defend women who are being subjected to unthinkable abuse.

For many years, the TOS has been giving attention to education and vocational training for young girls, as well as medical attention and parenting skills training for mothers. Dr Deepa Padhi, Vice-President of the TOS in Odisha State in India and President of the Mahabharat TOS group, is going a step further. In the state capital of Bhubaneswar (pop. 850,000 or 1.7 million if including larger metropolitan area), she has launched a multi-faceted programme to change people’s mind-set and stop violence against women. We hope that what she is doing will serve as a model to TOS groups elsewhere. This is only a beginning.

The campaign was officially launched in January 2013 by State Governor, Sri Murlidhar C. Bhandare, who invited the hundreds present to take a New Year pledge to treat women with respect and not discriminate against them at home or in the workplace. The book Living Courageously, written by Lipa Rath, a TOS member and herself a victim of violence, was released at the event.

“We have now begun creating awareness among different sections of society,” TOS President, Deepa Padhi said to the many reporters present. “We are working initially in slum areas to educate people on the importance of gender equality, of schooling for female children and on the cruelty of stigmatizing the victims of violence. We are using street plays, documentary films, posters and banners. Our first awareness programme took place in mid-February 2013 in Niladri Vihar slum. We have many presentations planned for this year.” 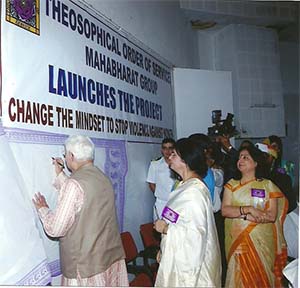 Deepa Padhi reports that her team also intends to make women aware of the support available from the State Women’s Commission and Mahila Police Station. Legal literacy workshops will be organized in various educational institutions and work places by the TOS. A counseling centre for women’s rights will be opened. Violated women and girls will be given free legal and social advice. Pre- and post-marital counseling will also be available.

TOS President, Deepa Padhi (centre), is flanked by a member of the State Commission for Women in Odisha and a researcher on gender equality. They are presenting an awareness programme in a slum area about the rights of women.

Deepa’s most ambitious plan includes direct citywide communication through billboards, banners and posters in English and in the local language, Odiya. She explains that slogans have to be chosen according to what is suitable and understandable in the local culture, of course. Here are the ones used so far:

Here are some of the slogans we have submitted to Deepa for her publicity campaign:

Deepa has written to schools and colleges seeking permission to put up billboards and banners. She has written to banks and companies for sponsorship of billboards. (Commercial billboards are too expensive for the TOS to rent without help from companies. So far, one has agreed to help.) Banners have already been put up in slum areas where awareness programmes have taken place.

In mid-May, Deepa had a breakthrough: the Mayor of Bhubaneswar unveiled the first billboard and dedicated it to the people of Odisha. He was so impressed by the design and text of the hoarding that he declared that he would sponsor four billboards in the city. He also expressed his desire to be a member of the TOS group. 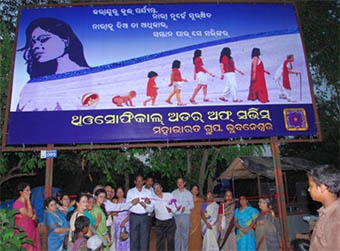 Would you like to support Deepa and her TOS team as they raise their voices against violence? How about sponsoring your own billboard poster as the TOS in Australia and New Zealand plan to do?

If you would like to help, we would be delighted to hear from you. Please write to the International Secretary, Diana Dunningham Chapotin at This email address is being protected from spambots. You need JavaScript enabled to view it.