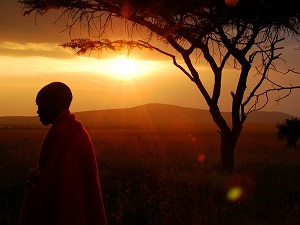 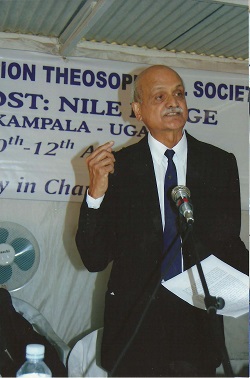 East & Central African Section of the T.S. held its 46th Convention from Friday 17 to Sunday 19 May 2013 at Nairobi Lodge.

At this Convention, which is held every two years, a new General Secretary was elected for the next 2 years. Term of our Section is 2 years and there is no limit on number of terms one can stand for.

I have served 3 two year terms - total 6 years.  I did not want to continue as G.S. as it is right that, even though there is no limit, to have a change of guard. 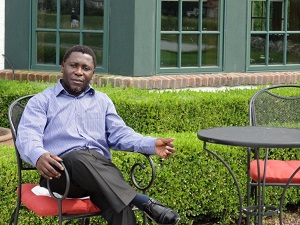 The A.G.S. for Zambia, Mr. Ebrony Peteli, who has been Zambia A.G.S. for 2 years was then proposed for this position and he accepted this nomination and was elected as the Section G.S.

Welcome address by Mr. Narendra M. Shah, who is the chairman of the Nairobi lodge and also the Assistant General Secretary, Kenya Region:

It is indeed a matter of great pride and privilege for the Nairobi Lodge to host the 46th Convention of The Theosophical Society in East and Central Africa, during this historic year when we celebrate our 50th Anniversary of the opening of this simple but magnificent hall. It was the wisdom and foresight of the members of those pioneering years that they saw the need and usefulness of this grand facility. We bow down, with humility, to late Mr. Rattanjibhai H. Patel, who donated this plot, completely free of charge, to the Nairobi Lodge. The elders of that time, worked hard, collected the funds and managed to build this monument! It is mainly due to this facility of a regular meeting place, that Nairobi Lodge has been able to grow from strength to strength and become the premier lodge in East and Central Africa.

In fact it is mainly due to this facility that Nairobi Lodge has been able to score two firsts in the Theosophical World.

The second one is that Nairobi Lodge is the only lodge in the whole Theosophical World which has succeeded in getting a new stamp issued by the postal authorities to mark the work done under the Theosophical Order of Service.
The world is passing through a very difficult period owing to ideological differences, political upheavals, economic downturns, material

greed and environmental degradation. At such a time, it is paramount that we return to nature and understand the oneness of life. Each one of us must play our parts, no matter how small, in the upliftment of mankind. In order to do this, we must understand who we are. We must realize that we are a spark of Divinity – a ray of the Logos, clothed life after life in different bodies and in different lands, in order to learn our lessons, pay our debts and finally to emerge as a perfect man – just as our elder Brothers, Jesus, Buddha, Mahavir, Mohammed, Guru Nanak and many more have done before us.

Many of the problems and challenges faced by mankind today can be solved or reduced if human being live lives based on the principles of Integrity and moral values.

Laws of right behavior are part of the Universal Order. We must ask ourselves ‘’How far have we wandered from Truth?’’ Thou shalt not kill, thou shalt not commit adultery, thou shalt not steal’’. These laws of truth have been expounded in the Ten Commandments and much earlier in the Eightfold Path of Yoga. The first two steps being of Yama and Niyama, the principals of right behavior which we should embrace and shun the wrong behavior.

The education and social fabric has not provided for the children the proper development of their minds. The Moral fabric is in shreds, virtues of courtesy, patience, respect and other wholesome qualities are lacking. Peer and environmental pressures, to get ahead at any cost to the detriment of self and others takes us on a wrong tangent. Uprightness, honesty, humbleness all the basic foundations of integrity, which build ones character, are replaced by arrogance, visions and grandeur and a lifestyle filled with restless activity, leading to stress, depression and a horde of other negative effects.

Until and unless moral values and the backbone of integrity are not part of oneself, it is very unlikely that humanity will find peace, contentment and joy in life. INTEGRITY and MORAL VALUES must become our cornerstone if there is to be a better world to live in.

On behalf of the Nairobi Lodge, I welcome all the delegates to this 46th Convention and hope their stay in Nairobi will be comfortable and the deliberations fruitful. 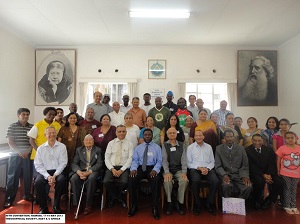 [The welcome address above was not edited by Theosophy Forward’s editor; it is reproduced here as it was received]