On March 23 and 24, 2013 the Second All-Russian Theosophical conference took place in Moscow. The theme was Spiritual Human Regeneration and it was organized by the Theosophical Society.

This year’s conference really became international. In addition to the delegations from several Russian cities, St. Petersburg, Smolensk, Ryazan, Nizhny Novgorod, Vladivostok and others, as well as from Ukraine and Belarus, the conference was also attended by Jan Jelle Keppler, General Secretary of the Belgian section of the Theosophical Society, and Monique Ver Poorten who is the secretary of the Leuven Lodge in Belgium.  Attendance was about 100 people, coming from 12 cities and 5 countries. 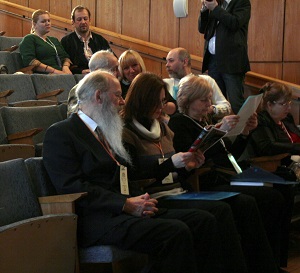 In total 17 talks were delivered. The subject of Human Regeneration was dealt with in several aspects:

The first group of talks touched the topic directly. Speeches were made by Jan Jelle Keppler, Svitlana Gavrilenko, chairman of the TS council in Ukraine, Tatiana Semionova, head of the center “Human Development” and Tatiana Petrishchevskaya, TS – Moscow. 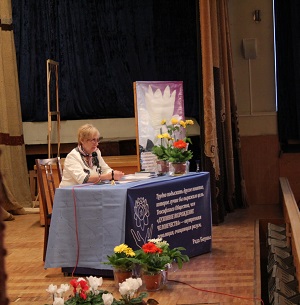 Tatiana Petrishchevskaya on the chair

In the second group of talks the role of Masters in Human Regeneration was shown by the poet Leonid Volodarsky and Tatiana Kadochkina, FTS – Moscow.

The fourth group elucidated the historical aspect of the theme with talks by Nikolai Panchishin, Theosophical group “Helios”, Minsk, Belarus, Ruslan Nizamiev, president of the foundation “Neopalimaya Kupina,” i.e. The Burning Bush, and Nikolai Nechayev of that same foundation.

The fifth group presented talks on the subject of ethics. Speeches were given by Elena Logayeva, researcher of H.P.B's life and work, Tatiana Bobyliova, FTS – Moscow, Luebov Mezinova, FTS – Nizhny Novgorod, and Larisa Popova, MD – Kiev branch of the TS.
In addition, the possible areas of social cooperation were explored in the talks of Luebov Krivich, FTS – Moscow, and N. Panchishin, Minsk. New areas of work were looked at by Dennis and Svetlana Orlovs, St.Petersburg.

The objective of discussions at the round tables was to discuss how to put theory into practice and integrate Theosophy in one's daily life.

A new feature was the round table discussion led by Peter Smirnov, which was especially organized to attract the attention of young people and those who are new to the Theosophical movement. 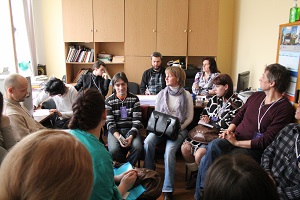 Round table discussion without a table 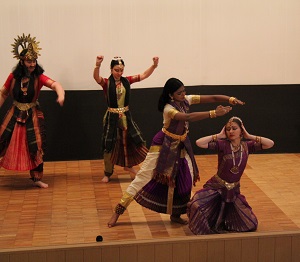 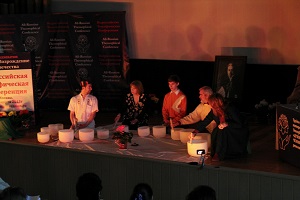 Another valuable contribution to the success of the conference was the distribution of books and magazines. The publishing houses Prologue, Neopalimaya Kupina and Amrita-Rus, as well as the magazines Delphis and Vestnik Teosofii took part in this. A proposal to publish H. P. Blavatsky’s Collected Writings in Russian was made.

The walls of the foyer were decorated by watercolor paintings by A.D. Armand, Doctor of Geographical Sciences, artist, F.T.S.

At the end of the first day of the conference, participants took a bus tour through Moscow.

The conference has shown how dynamic the subject of Human Regeneration is nowadays. Communication and a collective search for the solutions brought all partakers closer to each other.

The organizing committee is grateful to all those who morally and materially contributed to the realization of this successful conference.

We have 330 guests and no members online