Following its Annual General Meeting in May, the TOS in France organized a seminar on a rather delicate theme: “Burial, cremation and alternative funeral services”. The seminar attracted more than 50 participants keen to gain a Theosophical perspective on cremation in a predominantly Roman Catholic country where burial is the traditional practice. Participants were presented with a 60-page file containing items such as: 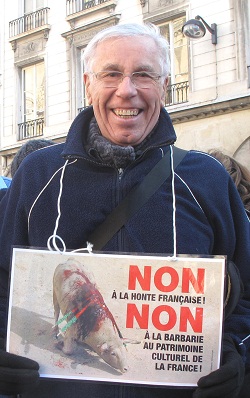 The TOS’s president, Michel Chapotin, here in action during a demonstration against bull fighting in France, led the seminar on an unusual topic that nevertheless attracted great numbers. More than 20 people absent on the day requested a postal copy of the material distributed.

The file of material distributed also offered point by point guidance on how to write theosophically-oriented funeral and commemorative services and included a wide choice of suitable quotations and suggestions for music styles. Model notes of condolence were provided for those who have difficulty in finding the right theosophically-oriented words of comfort for bereaved friends. Finally, very practical matters like the writing of a living will and dealing with funeral directors were covered.

Participants said that they found the seminar helpful in making choices for themselves and their loved ones and in organizing ceremonies reflecting their own spiritual perspective. They were enthusiastic at seeing Theosophy made directly relevant to essential life choices.