The INTERNATIONAL THEOSOPHICAL HISTORY CONFERENCE of 20-21 September, 2014, was held at 50 Gloucester Place, London. The papers (two read in absentia) were written by twelve delegates from England, Europe, the USA and the Middle and Far East. Their varied and interesting topics, all of a high academic standard, reflected the international diversity and enthusiasm of the speakers. They provided further evidence of the recent upsurge of Theosophical studies and revealed more examples of the Society’s appeal and influence in an impressively varied number of countries and fields. Although, as the Conference chairman and organiser Leslie Price pointed out, the Theosophical Society went through a period of crisis at the time of Krishnamurti’s break with it in 1929, it has not lost its relevance and its original ideals are still important today. 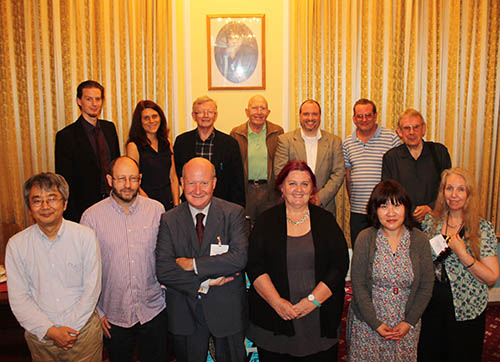 Papers which concentrated on the Society’s widespread influences included Kevin Tingay’s “Towards a Morphology of the Modern Theosophical Movement” which covered the numerous movements and groups affected by it. Tim Rudboeg’s “The Theosophical Society & Universal Brotherhood” discussed its positive social effects in many different countries. Massimo Introvigne, in “Theosophy and Modern Visual Arts”, looked at its enormous influence on painting and sculpture, concentrating on this occasion on artists of the Nordic countries.

Two talks were particularly unusual. One, John Crow’s “A Necessary Evil: Theosophy’s Ambivalence towards the Human Body” reminded us of the Society’s negative views of sex and physicality. These attitudes were found in earlier mystical traditions, but they also reflected nineteenth century morals. In “Theosophical Ideas of Collective Karma and their Relationship to Apocalypticism in America”, Erin Prophet, daughter of the cult leader Elizabeth Clare Prophet, introduced new ideas when she spoke of the Theosophical influences on the Apocalyptic tradition.

Another talk, covering a different place and period, was “Sincere Jews: The Jewish Theosophical Community in Basra, Iraq”, by Boaz Huss. This group of Jews, who founded a Theosophical lodge in the late 1920’s, engendered a great deal of controversy in their community. They presumably moved to Israel in 1941, along with the other Jews from Basra.

Several papers on subjects related HPB were also presented, as were the histories of Theosophical personalities such as Manly P. Hall. The two talks on the influence of Theosophy in China and Japan were also worth hearing, and the day finished with a public lecture by Leslie Price on the interesting subject of “Madam Blavatsky and the Seven Archival Mysteries.”