On Sunday the 10th of August 2014 the international president Tim Boyd accompanied by his wife Lily was in The Netherlands for a meeting with some 100 members from Belgium and The Netherlands, the “Dutch Day,” in the Besant Hall of the International Theosophical Centre in Naarden.

Before the meeting many informal and animated conversations with Tim Boyd already took place. The president addressed the members and spoke about the need for helping hands from all nations for our international society. His frank and open approach was highly appreciated. 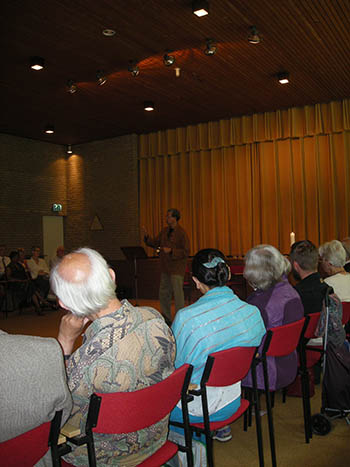 After the group picture was taken and the lunch there was a session with questions and answers in the Besant Hall. It was a delight to see the interaction between the members who could ask questions on the one hand and Tim Boyd addressing those on the other, in a very open and broadminded manner.

To see Tim Boyd in action follow this link.

Before closing the Dutch Day, all could attend a meditative meeting that was organized by the Link Officers of the ITC. (International Theosophical Centre)

Here participants were invited to form a channel for higher energies to transmit the powers Peace and Unity to the whole world:

“There is One Life, One Will and One Brotherhood of Nations. May the Spirit of Unity and Love, that knows no barriers, make Brotherhood in the world a living reality.”

We have 530 guests and no members online