Good News from the TOS in Italy

The TOS group in the city of Vicenza in Italy, coordinated by Sandra Sartori and Stefania Schiavo, continues its relief work supporting the Syrian refugee camp of Bab al Salam in collaboration with the international association Time4Life which leads the relief project. 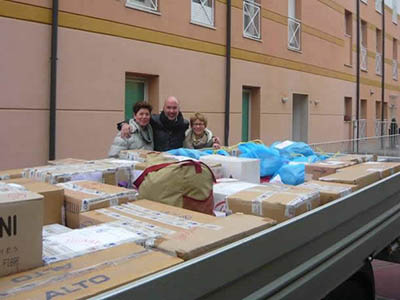 There are four million displaced people in Syria because of the civil war. They are victims of hunger and poor sanitation in camps where food, medicine, clothing and health care are lacking. Those most at risk, as always, are the children. Time4Life International reports that the area where Bab al Salam camp is situated has in recent months been seriously affected by strong disputes and clashes amongst various factions, including and especially among the ‘rebels’.

The violence obviously has consequences for those who seek to bring relief to the victims of the war. Ministerial sources have issued strong warnings to relief workers about their safety. After a failed suicide attack during a mission in January, a car bomb explosion a number of weeks ago that damaged the refugee camp’s medical clinic, and a change in the Bab al Salam camp management, the association has learned indirectly that it is no longer welcome on site. 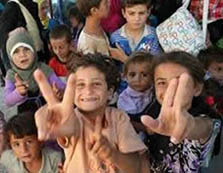 Children who have benefited from the aid

In order not to jeopardize the safety of those taking care of the distribution of aid, support of the population will continue with the same determination but through different avenues. The TOS will stand firmly by this brave initiative, to which many doctors and volunteers are devoted in the true spirit of service. In the photos here, we see some phases of the collection of material sent to Syria in March.

We have 426 guests and no members online