The 37th European Congress, organised by the European Federation of the Theosophical Society (Adyar) and French Section, was held from the 30th of July to the 3rd of August 2014 in Paris, France, at the Adyar Theatre and the premises of the TS in France. The theme “Bridging Science and Spirituality” attracted more than 180 participants from 23 countries. 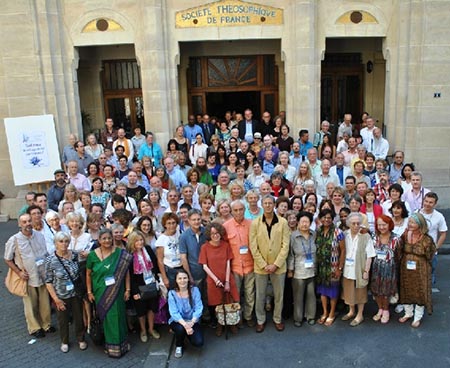 The theme was covered by 18 speakers, among them International President, Tim Boyd, and several scientists and researchers: Andrej Detela (Slovenia), Ulrich Morhhoff (Germany/India), Muriel Pécastaing-Boissière (France) and Luc Lambs (France), as well as Trân-Thi-Kim-Diêu, Chairman of the EFTS and General Secretary of the TS France together with many General Secretaries and workers in Europe (programme available on the EFTS website at http://ts-efts.org).

The programme of the Congress was varied, covering humanities as well as exact sciences, hence giving a holistic and multifaceted overview of the subject and testifying that “science is our best ally”.

The Congress took place in a warm and earnest atmosphere. It was well received and participants could take home many new lines of thought for future studies.

During the Congress, a well-known pianist, Ekaterina Derzhavina, gave an exceptional piano recital of J. S. Bach’s “Goldberg Variations”. Also, TS members in Europe, including Italian delegation, French and Finnish members gave a joyous and enjoyable entertainment programme. At the closing session, Laurent Cabanel, an opera singer, member of the TS in France, vibrantly sang Beethoven’s Ode to Joy, the anthem of the European Union.

During the days of the Congress vegetarian lunches were served on the premises of the TS in France by a special caterer and the tea-breaks were served by the French team workers. All this took place in a very warm and fraternal atmosphere.

There were also stands of the TOS, Entr’aide (for members in need) and CNA (for publishing Theosophical books), which participants could visit.

The Congress was closed with the announcement that the 38th European Congress will be organised in 2017 by the Spanish Section.

The programme of the Congress was live-streamed over the Internet and many people followed the event online. Videos of the lectures, opening and closing can be watched on the EFTS’ Video channel at http://vimeo.com/efts/videos.

All videos can also be accessed on the website of the EFTS at http://ts-efts.org/ where, in addition to lectures, photos and news of the Congress were published.