The Three Objects as a Guide to the Spiritual Path 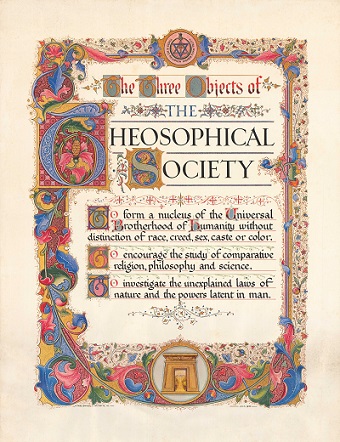 Although the Theosophical Society has three objects, it surely has only a single purpose, which is to uplift humanity from the moral and spiritual point of view.

This work, the upliftment of humanity, is the spiritual path which we are hoping/working to tread. Many have written or discussed the meaning of walking the spiritual path from a theosophical perspective. Summing up many of those writings, it becomes clear that walking this path leads us to an inner awareness–not just a theory, but a real Knowing–of the Oneness of all life. This then leads us to the further realization that we must live in such a way that we are serving all Life.

The Theosophical Society was meant to be an organization of people from every culture who have some sense of the underlying unity of all. It was meant to be an organization of people who work together to help others realize their underlying unity with humanity as a whole. Far as we may be from it, that is our ultimate goal … From an awareness of underlying unity comes an altruistic way of life that is compassionate, wise, and practical. That is the sacred mission of the Theosophical Society made clear by KH when he wrote, “The chief object of the T.S. is not so much to gratify individual aspirations as to serve our fellow men.” (#2 Barker)

The three objects bind us together as an organization, but even more they point us toward our ultimate goal: an altruistic way of life in which we serve others. They are a guide that will help us live a life dedicated to the unfoldment of consciousness, and it is not just our consciousness that we are dedicated to unfolding. We are dedicated to the unfoldment of the consciousness of all life. This unfoldment of consciousness may be phrased as the spiritual regeneration of humanity. N. Sri Ram, former international president said that the TS “was founded with the exalted purpose of promoting the spiritual regeneration of man….” Radha Burnier tells us that "it is probably necessary for members of the TS throughout the world to enquire into what these objects signify in terms of regeneration, the upliftment of the human mind--whatever one likes to call it."

John Algeo, former International Vice President and National President of the Theosophical Society in America, in his article “The Objects and Their Relevance to the Theosophical Life” points out that the objects have both an outer and an inner relevance. Certainly, the outer relevance provides the foundation for the organization and, as he says, is “the basis of our corporate unity.” They encourage people to join or support the organization, for few can disagree with the statements of brotherhood and sisterhood, open-minded inquiry, and spiritual self-transformation.

However, Algeo points to an inner relevance as well. He points out very clearly that this inner relevance is open and available to all. He calls it an open secret and tells us that it really depends on how one applies the objects to one’s personal theosophical life. He writes about this open secret:

… the inner does not replace the outer sense, nor is there a single inner sense. Rather, the Objects’ inner sense is what we as Theosophists make of them as we live Theosophy. Consequently, the inner sense will vary to some extent with each Theosophist.

The objects, while simply stated, are filled with nuances and inner meanings that could keep us contemplating and meditating for years.

The objects point us toward assisting in  the work of the Great Ones; moving beyond mere study toward wisdom that touches the heart of all things; and expanding our consciousness so that we may experience the unity of all.

The objects are interrelated. The second and third objects, each in their own way, lead us back to a realization of the first object.

Radha Burnier states that "The objects of the Society cannot be unrelated to each other, for they are all related to the question of human progress and perfection, to regeneration."

Bertram Keightly, a prominent English Theosophist who helped Helena P. Blavatsky in editing her magnum opus, The Secret Doctrine,  suggested that “Instead of our three Objects being, as often erroneously supposed, separate, distinct, disconnected, they are in truth intimately and vitally related to each other.”

Joy Mills mentions that “we come to recognize that the Objects of this Theosophical Society are all interlinked and interrelated toward the single purpose of bringing about the transformation of ourselves and thus of the world.”

Study is essentially a mental process …The Second Object seeks to give breadth to the mind. We are using here the word mind in its meaning of the composite process of thought and emotion. [the lower mind] The purpose of the Second Object is to enlarge the horizons of the mind, to extend its range so that there is no avenue of the mind which remains unexplored.

It should be remembered that the [lower] mind’s explanations can cover only the realm of quantity. It can give only statistical explanations of the phenomena of Life. It can formulate laws with reference to measurable quantities only. And so the qualitative aspects of life—those aspects which cannot be put in the framework of statistical measurement—must ever remain unexplained to the processes of observation and examination carried on by the mind….Curiously enough, [one] who knows the possibilities of the mind, … knows at the same time the limitations of the mind.

According to Mehta, then, we study in order to explore all of the possibilities of the mind, push it to its limits, so we can find its limits, and it is in this way that we can move beyond the mind. The true self, while working through the lower mind, does not exist in this concrete mind/brain. This is still the world of illusion, the world of the personality; however, while we continue to live in this temporal world, we must hone the mind/brain so that it serves us.

About the third object Mehta writes the following:

Now the third object asks us to ‘investigate’ unexplained laws and the powers latent in man. To investigate is to carry on a careful search. Thus, while the Second Object lays stress on study, the Third Object emphasizes search. “How can the higher dimension of consciousness be sought after by the lower? How can the mind know that which lies beyond its frontiers?

He shares with us, as does so much of the Ageless Wisdom teaching, that to know what lies beyond the frontiers of the brain/mind, we must quiet it. It is when the physical brain is quiet that we can potentially access the higher aspects of ourselves. We can gain an intuitive understanding, and possibly experience, some aspect of the TRUTH of the unity of all life.

Together the three objects indicate what may be called the Theosophical Approach to Life. The Theosophical Society stands pre-eminently for Brotherhood–and Brotherhood implies “right perception of things objective.” How to come to this right perception? It is this which is indicated under the study of comparative religion, science, and philosophy and under the search for unexplained laws of Nature and the powers latent in man. As has been stated above, the study is to be carried on with a view to exploring the possibilities of the mind, and the search is to be undertaken in the background of the awareness of the mind’s limitations.

Therefore, we find that the second and third objects of the Theosophical Society support the possibility of an intuitive understanding and experience of the first object: the essential unity of all life. We study in order to find the limits of the mind so that we can transcend the mind. In order to do so, the mind must become a reflecting medium, reflecting the higher aspects of ourselves and of the universe. In this way, we begin to experience a dimension of consciousness that is new to us. It is through an experience of this dimension of consciousness that we return to the first object and potentially gain a much deeper and more personal understanding of the unity of all life.

Bertram Keightly also asserted that, “Universal Brotherhood is not only the foundation-stone of the Theosophical Society, but literally the essence of its Second and Third Objects–the life-giving spirit in them all.”

His statement is echoed by Joy Mills:

The Objects point us in the direction we–and one day all humanity–must walk, the direction of being brothers, of knowing our brotherhood not just as a theory, but as a reality, acting at every moment in harmony with ourselves, with others, and with all the life that surrounds us….We have been given magnificent aims to set before ourselves. The purpose of the Objects is clear: to remind us constantly of why we are here, not just as members of this Society, but as men and women walking the ways of humankind towards the gods.

We are here to serve humanity through spiritual regeneration, the spiritual transformation of ourselves and of all life. We are here to live a theosophical life, a life of altruism in its highest sense: doing everything we can to expand the consciousness of humanity, whatever it takes.

Algeo, John. “The Objects and Their Relevance to the Theosophical Life.” The Theosophist, Volume 118, Nov. 1996.

Keightly, Bertram. “The Objects of the Theosophical Society,” Adyar Pamphlet #132.

Sri Ram, N. “The Real Work of the Theosophical Society.”

[This article is based on a talk Barbara Hebert delivered on October 1, 2022 in Krotona.]

We have 1120 guests and no members online