On the Future: A few Reflections 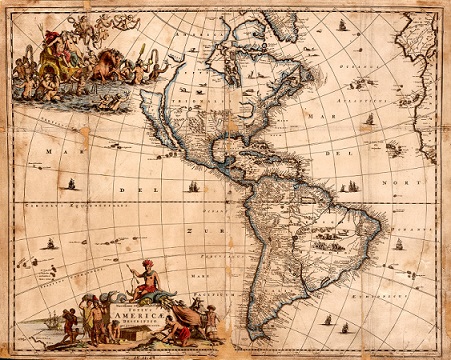 Although I am an American citizen, the place of my birth was in Ireland, and in what I am about to say I cannot be accused of Columbiamania, for no matter how long might be my life I could never be an American. For that perhaps it is right, since it is compulsory, to wait for some distant incarnation.

Now, either H.P.B. was right or she was wrong in what she says in The Secret Doctrine about the future of America. If wrong, then all this may be dismissed as idle speculation. But, if right, then all thoughtful Theosophists must take heed, weigh well, mentally appropriate and always remember what are her words as well as the conclusions to which they lead.

In the first pages of the second volume she speaks of five great Continents, first, the Imperishable Sacred Land [this is at the North Pole. W.Q.J.]; second, the Hyperborean, now part of it is in Northern Asia; third, Lemuria, sunk long ago, but leaving some remains, islands, the points of the high mountain ranges; fourth, Atlantis, presumably in the Atlantic Ocean, now below the level of the water, but with perhaps Tenerife and Atlas as reminders; and fifth, "was America".

From a survey of the book, digging in notes and culling from the text here and there, the conclusion is irresistible that although the present America is not the actual Continent as it is to be, it is a portion of it; and certainly is now the nursery for the race that will in the future occupy the sixth Continent, which for the sixth Great Root-Race will emerge from the waters. Where? Perhaps when the present America has been split up by tremendous cataclysms, leaving Here and there large pieces on its western side, it is in the Pacific Ocean that the great mass of the new one will come up from the long sleep below the sea. Rightly then will the great western ocean have been named Pacific, for that Race will not be given to contest nor hear of wars or rumors of war, since it will be too near the seventh, whose mission it must be to attain to the consummation, to seize and hold the Holy Grail.

Turn to page 444 and onward of the second volume. Read there that the Americans have become in only three hundred years a primary race pro tem, in short, the germs of the sixth sub-race, to blossom in a few more centuries into the pioneers of that one which must succeed to the present European fifth sub-race in all its characteristics. Then after about 25,000 years, which you will note is meant for a great sidereal cycle of a little over that length of time, this new race will prepare for the seventh sub-race. Cataclysms will then fall upon you; lands and nations will be swept away, first of all the Europeans, including the British Isles - if not gone before - and then parts of both North and South America. And how puny, mongrel, indeed, will be the remains of the scientists of today, great masters of microbes now, but then to be looked upon as strange remains of the Nineteenth Century, when, as the people will tell each other then, so many, with Truth before them, laughed at it and stoned its apostles, dancing a fantastic dance meanwhile around the altar of invisible matter.

It seems as if some power, deliberately planning, had selected North and South America for the place where a new primary root-race should be begun. These two continents were evidently the seats of ancient races and not the habitat of wild undeveloped men. The red man of the Northern one has all the appearance and beliefs of a once great race. He believes in one God, a Devachan of happy hunting after death. Some tribes have diagrams of how the world was formed and peopled, that strangely resemble the Hindu cosmogony, and their folk-lore bears deep marks of having come down from an older and better time. Following the course of exploration southwards, we find accumulating evidences all the way of a prior civilization now gone with the cyclic wave which brought it up. Central America is crowded with remains in stone and brick; and so on south still we discover similar proofs. In course of time these continents became what might be called arable land, lying, waiting, recuperating, until the European streams of men began to pour upon it. The Spanish overflowed South America and settled California and Mexico; the English, French, and Spanish took the North, and later all nations came, so that now in both continents nearly every race is mixed and still mixing. Chinese even have married women of European blood; Hindus are also here; the ancient Parsi race has its representatives; the Spanish mixed with the aborigines, and the slaveholders with the Africans. I doubt not but that someone from every race known to us has been here and has left, within the last two hundred years, some impression through mixture of blood.

But the last remnants of the fifth Continent, America, will not disappear until the new race has been some time born. Then a new Dwelling, the sixth Continent, will have appeared over the waters to receive the youth who will tower above us as we do above the pigmies of Africa. But no America as we know it will exist. Yet these men must be the descendants of the race that is now rising here. Otherwise our philosophy is all wrong. So then, in America now is forming the new sub-race, and in this land was founded the present Theosophical Society: two matters of great importance. It was to the United States, observe, that the messenger of the Masters came, although Europe was just as accessible for the enterprise set on foot. Later, this messenger went to India and then to Europe, settling down in the British Isles. All of this is of importance in our reflections. For why in America at first does she begin the movement, and why end her part of it in England? One might be led to ask why was not an effort made at all costs to give the last impulse outwardly in the land of promise where she began the work?

Do not imagine for one moment, O ye English brothers of mine, that London was selected for this because the beauties of your island called her, or for that she had decided at the finish that after all a mistake had been made in not going there first. It was all out of stern necessity, with a wisdom derived from many older heads, having in view the cycles as they sweep resistlessly forward. The point where the great energy is started, the centre of force, is the more important, and not the place at which it is ended. And this remains true, no matter how essential the place of ending may be in the scheme. What, do you suppose India is not as important? and would not that land have offered seemingly a better spot than all for the beginning of the magnum opus? Adepts do not make mistakes like that.

America's discovery is ascribed to Christopher Columbus. Although it is doubted, yet no one doubts that the Spanish people did the most at first in peopling it, meanwhile working off some old and making some new Karma, by killing many of the aborigines. Thus it is that doomed people rush on to their doom, even as the troops of insects, animals and men were seen by Arjuna to rush into Krishna's flaming mouths. But later came the sturdy stock from England, who, in the greatest nation, the most enduring on this continent, have left their impress indelibly in the people, in its laws, in its constitution, its customs, its literature and language. Perhaps England and Ireland are the gateways for the Egos who incarnate here in the silent work of making a new race. Maybe there is some significance in the fact that more lines of steamships conveying human freight come to the United States from England, passing Ireland on the way as the last seen land of the old world, than from anywhere else. The deeds of men, the enterprises of merchants, and the wars of soldiers all follow implicitly a law that is fixed in the stars, and while they copy the past they ever symbolize the future.

Did H.P.B. only joke when she wrote in her book that Ireland is an ancient Atlantean remnant, and England a younger Isle, whose rising from the sea was watched by wise men from Erin's shore? Perhaps the people of that old land may have an important influence in the new race of America. It would appear from comparison that they might have had, and probably will in the future. Perhaps, politically, since many expect social disturbances in America. In such a case any student of character will admit that the Irish, ignorant or not, will stand for law and order - for her sons are not battling here with an ancient foe. Why, too, by strange freak of fate is the great stone of destiny in Westminster Abbey fixed under the coronation chair on which the Queen was crowned? Let us also be informed if there be any finger-shadow pointing to the future in the fact that England's Queen, crowned over that stone* (*It is an interesting fact that in India there is an important ceremony called "mounting the stone.") is Empress of India, from which we claim the Aryans came, and where their glorious long-forgotten knowledge is preserved? Her name is Victory. It is the victory for "the new order of Ages"; and that new order began in America, its advent noted and cut on the as yet unused obverse side of the present seal of the United States Government. A victory in the union of the Egos from East and West; for England stretches one hand over to the home of the new race, which she can never own, with the other governing India, and completes the circuit. It may be a fleeting picture, perhaps to be wiped out for a while in a stream of blood, but such is the way the cycles roll and how we may learn to read the future. For England's destiny is not complete, nor has the time struck. None of us hug foolish delusions too long, and even if Ireland were once a most sacred place, that is no reason why we should want to go there. For in America those whose Karma has led them there will work for the same end and brotherhood as others left in India and Europe. The dominant language and style of thought in America is English, albeit transforming itself every day. It is there that silently the work goes on; there European fathers and mothers have gone, establishing currents of attraction that will inevitably and unceasingly draw into reincarnation Egos similar to themselves. And the great forward and backward rush is completed by the retarded Egos as they die out of other nations, coming meanwhile into flesh again among the older races left behind.

At least such seemed the view while the clouds lifted - and then once more there was silence.