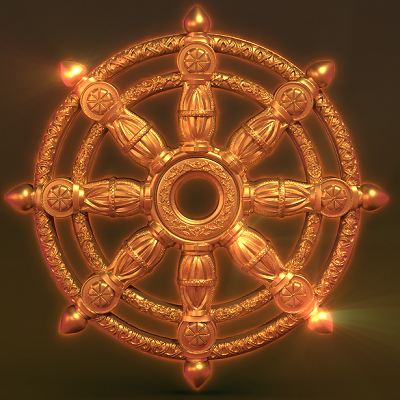 [This article appeared in the August 2022 issue of The Theosophical Movement. For more articles published in this excellent magazine follow this link:  https://www.ultindia.org/current_issues.html]

The Sanskrit term Dharma, among many others in the philosophical tradition of ancient India, has been variously understood and interpreted in the popular discourse, while the true significance of it remains elusive because of the vast scope of its many meanings and applications, encompassing the cosmic order, and its innumerable specific applications to everything and every being, from an atom and an infusoria to the Sun. The many specific microcosmic applications of it in specific environment ever gravitate towards and subserves the macrocosmic order and purpose. Mr. Judge in his “Letters” has given a meditative and vivid but concise word picture of the Cosmic order and purpose, which will give us an idea of vast scope and meaning of the term Dharma:

“The Deity desires experience or self-knowledge, which is only to be attained by stepping, so to say, aside from self. So the Deity produces the manifested universes consisting of matter, psychical nature, and spirit. In the Spirit alone resides the great consciousness of the whole; and so, it goes on ever producing and drawing into itself, accumulating such vast and enormous experiences that the pen falls down at the thought. How can that be put into language? It is impossible, for we at once are met with the thought that the Deity must know all at all times. Yet there is a vastness and an awe-inspiring influence in this thought of the Day and Night of Brahman. It is a thing to be thought over in the secret recesses of the heart, and not for discussion. It is the All.” (Letters That Have Helped Me, p. 60)

The profoundly meditative and abstract meaning of Dharma given by Mr. Judge in the foregoing seems to imply that it is the ultimate Law—LAW of all Laws—of universal progression by alternating cycles of manifestation and non-manifestation in an ever ascending scale of perfection, having neither beginning nor end, accumulating incomprehensibly vast experiences and Wisdom. It means Absolute Deity is synonymous with Absolute LAW, the two being one.

The lower kingdoms of nature instinctively obey the law and progress on the path of evolutionary development to higher life heading towards Man stage, which when attained they receive the fire of self-consciousness, or Manas. Further development of Man, the Manasic being, is no more by natural impulse as in the case of lower kingdoms; but having been endowed with reason, will, intellect, judgment and spiritual discrimination, standing as he does on the pinnacle of evolutionary ladder of the sub-human kingdom, he is compelled to make moral choices in every act and in every situation, and progress by self-effort and merit, checked by his Karma, and learning from the experiences thereof through a long series of cycles of reincarnation. Here we come upon the nuanced difference between, and yet inseparable concomitance of, Karma and Dharma

Karma is action and the consequences which follow every act in producing moral, mental, physical effects by which the thinker and the actor becomes bound. If the Karma of man is in accord with the Dharma, the great evolutionary Law, the Law of the Deity, ever tending towards self-realization, he rapidly evolves towards conscious union with the Deity, and becomes a co-worker with progressive order of Nature. If, on the contrary, his Karma is in dissonance with the great Law of the Deity, striving for separate existence due to the illusion of separateness of the personal self, he retards the harmonious progressive order of the great Nature, and suffers from the retributive Karma which he thus sets in motion. All beings perform their Dharma proper to their respective kingdoms according to the overall plan of progression in the universal mind. Man too, as the Thinker, Soul, has his Dharma. What then is his Dharma? Mr. Judge discounts the ordinary meaning ascribed to the term Dharma, such as rules of human conventions, and gives the true significance and meaning of the Law of Karma-Dharma in his Notes on the Bhagavad-Gita (p. 9, Indian Edition):

“It [Dharma] means an inherent property of the faculties or even of the whole of man, or of anything in the cosmos. Thus it is said that it is the duty, or Dharma, of fire to burn. It always will burn and thus do its whole duty, having no consciousness, while man alone has the power to retard his ‘journey to the heart of the Sun,’ by refusing to perform his properly appointed and plainly evident Dharma.”

Hence the natural Duty-Dharma of Man is to acquire the right knowledge of self, of the purpose of life, and of the implacable Law of Karma and of Reincarnation, and make the insight so gained as the foundational principle for his thought and action and strive towards the great end of self-realization, thereby actively aiding whole Nature in her incessant work of higher evolution of beings. Existence, well-being, and higher progress of man is dependent on the sacrifice of beings of all grades of development, and he is, therefore, duty bound to reciprocate by living to benefit all mankind and all beings below and above him. This is the Wheel of Duty-Dharma spoken of in the Bhagavad-Gita, failing to perform which, says Sri Krishna, man incurs sin and lives to no purpose.

Great Teachers of humanity from time immemorial have laid down Dharma Marga, the Law of Virtue, which form world ethics that underlie all religions to be found in devotional books, such as, The Bhagavad Gita, The Dhammapada, The Voice of the Silence, and so on, following the precepts of which man attains happiness in life, leading in the end to his emancipation and perfection. “Do not follow the law of evil.” teaches the Buddha. “Do not live heedlessly. Do not follow the false doctrine. Do not befriend the ways of the worldly. Be watchful. Be not heedless. Follow the Law of Virtue. The virtuous live happily in this world now and also in the hereafter.” (The Dhammapada, Canto—The World). The Bhagavad-Gita teaches that human happiness naturally follows when one lives a life of moderation in everything, regulating natural human desires by moral fitness, and performs proper duties of manhood without attachment to the outcome, whether they succeed or fail, as sacrifice to the Higher Self. Even a little of this practice saves man from great danger,

Failing to live and practice the Law of Virtue one inevitably succumbs to the impulses of Kama-desire, egotism, and treads the Law of Vice, which is the source of all the misery and unhappiness in the world. Pain and sorrow which form the bulk of life’s experiences, that follow the living the life of indifference or of vice, is however not an unmixed evil. The soul ripens in the fire of suffering in the domain of Karma-Nemesis, learns, and at last takes to the path of righteousness, however long the consummation may take in the journey of the Ego through cycles of earth life.

It is the paramount duty of man, even in ordinary life, to live by the Law of Virtue taught by all the great Teachers of humanity. It is conducive to happiness, prosperity and harmony. Man has however a greater duty and higher purpose than basking in the warmth of the sun of virtue. For the one who has learnt the deceptive allurements of personal existence and earnestly aspires to live the Higher Life, the path of Dharma he has to traverse becomes more stringent, which he has to pass through, and prepare himself for the arduous labor protracted through many lives. The labor consists in absolute renunciation of personal self, imbued as it is with the illusion of separateness, and strive for realization of true self to be indivisible One SELF, even while performing obligatory mundane duties.

The Secret Doctrine teaches (II, 109-110) that two forces propel all evolution and compel Man to growth and development towards perfection. One is the universal force inherent in the MONAD, the ALLFORCE, which is limitless and absolute, which “cannot be said to act understandingly, but it is the one and sole immutable Law of Life and Being.” It is the “Free Force.” This is Dharma in its highest sense.

The other is the “indwelling or the conditioned force” which is the mortal personal Self of Man, the maker of Karma and the product of his own Karma, the law of cause and effect, perpetuating itself blindly through countless reincarnations by self-perpetuating power of Tanha, thirst for gratification of desire and sensation in earthly life. The Ego must conquer this blind concupiscence, take refuge in and become a slave of Higher Self, the All-Spirit, whose mission it is to guide and shape it.

We have 35 guests and no members online