A Search for Universality 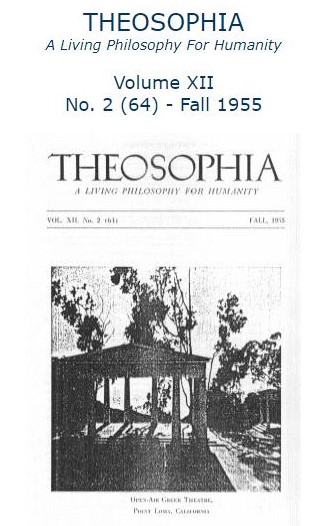 The essential key-note of the Theosophical Movement throughout all ages has been its Universality. By the very nature of its message, its objectives, and its ideals, it can never be confined to any single group of human beings, to any single ethnic grouping of humanity, or any single department of human thought and endeavor. Everything that is genuinely Theosophical, is unconditionally universal in meaning and application, in theory and practice. Conversely, anything that is in the least dogmatic, intolerant, sectarian and constricted, can never be genuinely Theosophical, no matter what may be the painted lapel, or the honeyed words, under which it is offered and presented.

As pointed out by Master K.H. (Mahatma Letters, p. 367.): "Beware then of an uncharitable spirit, for it will rise up like a hungry wolf in your path, and devour the better qualities of your nature which have been springing into life. Broaden instead of narrowing your sympathies; try to identify yourself with your fellows rather than to contract your circle of affinity."

The greatest enemy of the Theosophical Movement is sectarianism, dogmatism, self-righteousness, which are but different facets of one and the same tendency in our character, namely, separateness. Wherever and whenever these manifest in theosophical work, degeneration sets in, and the open vision of the stars is beclouded by the fume of the brain-mind. Personal allegiances supersede devotion to Humanity as a whole. Personal adorations are set up sooner or later - sometimes embodied in a person, and sometimes in a book. The circle of affinities narrows down, and another church is born, with high-priests, mental and moral genuflections, and the makings of a new creed. Every manifestation of the Universal Theosophical Movement had to fight this tendency. The modern manifestation of that Movement is no exception in this respect.

It should also be borne in mind that outward Organizations, good and needful as they may be, can never house or embody more than a fraction of a Movement which is by essence and nature Universal and ageless. Institutions come and go. They rise and pass away. Personalities, even the greatest, are at best but fleeting shadows on a wall. But a Movement, and especially a spiritual one, is an integral part of what might be termed Cosmic Circulatory Systems, intimately linked with the evolutionary growth of Mankind as a whole.

Therefore, whatever may be our personal allegiance to this, that, or another fragment of the original Theosophical Society, which do such splendid work in their respective spheres of influence, our primary spiritual allegiance should be to the Theosophical Movement as a whole, ageless and universal - a surging, vibrant, soul-stirring power flowing from the very heart of this Globe itself, and derivative ultimately from the Sun. It suffuses humanity and interpenetrates it, even though Humanity at large is often unconscious of it altogether. To quote from Master M. (Mah. Let., p. 271.):

"The sun of Theosophy must shine for all, not for a part. There is more of this movement than you have yet had an inkling of, and the work of the T.S. is linked in with similar work that is secretly going on in all parts of the world."

Every genuine and impersonal work in the Cause of the Theosophical Movement - which is the Cause of the "Great Orphan," Humanity - is an integral part of a universal pattern, and has either the direct or the indirect backing of the Teachers and Custodians of the Sacred Knowledge, whose attention and guidance can be compelled only by impersonal service, self-forcefulness, devotion to the noblest and highest, as one understands these, whatever one's limitations of outlook may be, and that love for principles and ideals which is the overtone of the life of every true server.

Disciples of the Great Ones are at work everywhere. Some of them are relatively great; some others not so great; still others are but beginners in the task of discipleship, even though they may stand far ahead of where you and I are to be found. Neither you quasi-occult institutions born of the original Theosophical Society, nor the progressive bodies within the corporate unit of Christendom, nor the halls of Science, nor the fields of social service, are devoid of them. For the Theosophical Movement is absolutely Universal and unbounded, and its ramifications permeate the human race. Teachers, Pupil-Teachers, and disciples, whatever their degree of knowledge, are not the prized and exclusive possession of any Organization or Institution, as such, not even a declared Theosophical one; they are at work the world over and remain, more often than not, unrecognized.

One of the commonest errors which finds its lodgment in the mind of some students, as well as groups of students, is that somehow or other they are "independent" of others, or can become so if they take the necessary steps. What these steps are remains undefined, however. It should be distinctly understood that "independence" is merely another political slogan, whether of this or any other century. As a fact of nature, it does not exist. Nothing in the Universe can possibly be or become "independent," no matter what may be the action or trend of thoughts of a living unit in the vast web of Cosmic Life. As everything is co-related, co-existent, and inter-connected, everything therefore must be inter-dependent, because intimately woven together by common karmic ties. Whenever a would-be student of the majestic Theosophical philosophy speaks of independence; he simply shows that his mind has not grasped the fundamental teachings of the ancient wisdom, and is caught for the time being in the illusory and misleading maze of arbitrary worldly conceptions, based primarily on the selfish interests of the personality.

One of the surest pathways to a growing realization of Universality is to become progressively more and more aware of the continuity of life, and the rhythmic rise and fall of all our endeavors, objectives, aspirations and actions. Each one of us has had a varied and checkered past; each one of us has seen many a civilization born, and has witnessed the decline of other many climes, and striven after knowledge in distant eras of history, only to be reborn again and to renew our search for those realities of being which stand as mystic symbols upon the ever-receding horizons of our life. Who would deny this past? No serious thinker could possibly imagine that the hunger for truth has awakened in us but a few years ago. Our association with this spiritual Movement is proof positive of the fact that we have worked in it before, and have assumed in former ages spiritual and ethical obligations which today, once again, have come to the foreground of our lives and challenge our minds and hearts with an inner compulsion which cannot be denied.

Who can tell with absolute certainty where these earlier experiences took place? The chances are they ran their course in most of the civilizations history knows of, and in many other periods of time of which that same history has no knowledge at all. We speak of the ancients; who are those ancients? Are they not ourselves in some previous role upon the ever-changing karmic stage-setting of life? We are the ancients, although, no doubt, some of the greatest among them may not be with us at this particular moment, awaiting perchance other circumstances, other karmic settings, to be reborn in. As students, aspirants, seekers after truth, we have taken part in this Movement under its many bygone forms and manifestations. Some have seen the vanished glory of the Egyptian mystery-schools in temples whose ruins are but the mute witnesses of the living past ... some have taken part in the initiatory cycles of ancient Greece, the rites and teachings of Eleusis, or Samothrace or Dodona ... some may have followed the Buddha in his wanderings and learned from him the precepts of the Good Law ... others again may have sat at the feet of ancient Hindu Teachers, bringing with them today the vague recollection of these experiences ... some, no doubt, sought and found truth among the somber oak-groves of the Druids, or helped to keep the pagan fires burning in the forest-sanctuaries of early Germanic tribes. Some have come back today with a distant recollection of a great splendor, from the days when esoteric knowledge stood high and was deeply respected; others have come with the memory of horrors, from days when the ancient knowledge was persecuted and its votaries put to the sword, like the days of Julius Caesar whose legions wrote the last chapter of the mystery-schools of Western Europe, destroying the ancient temples of Alesia and Bibracte in Gaul. And how many other connections some of us may not have had, in times so distant in the past, that neither name nor description remains of their peoples and their deeds!

And if all of this is true - and how could it be false, in the light of the age-old teachings - then it is imperative that our attitude towards all students of the ancient wisdom be one of sympathetic understanding and good will. Even though we may not agree with their view of the teachings, or their present interpretation of them, even though we may consider them to be confused, as compared with our own understanding (which, to be sure, is but a degree of ignorance, or a degree of knowledge, at best!), we have no ethical right to condemn them, or to assume with regard to them a position of intellectual superiority. They have been seekers with us in former ages, and it is quite possible that we may have contributed in the past to what appears to us at present to be their relative confusion or ignorance. The attitude of superiority on our part should be replaced by one of genuine understanding of their difficulties, and a sincere effort to throw some additional light upon what to them is obscure or bewildering or hard to grasp. In this way we act as centres of light, as outgoing impersonal forces striving for the greatest good of the many, as broadcasting antennae emitting those vibratory rates which in due course of time will impinge upon sensitive hearts and minds and evoke a sympathetic response.

As students of the Esoteric Philosophy, seekers after truth, pilgrims of the changing cycles, we have no creed to proclaim, and no dogmas to uphold. It should be our objective, however, to develop the ability to reduce the complicated to the simple, and to recognize inclusive structural principles at work in the vast scheme of Universal life. It is Ideas that count, not their temporary modifications. It is Principles of Thought which should be awakened in Thinking human beings, so that they learn how to think for themselves, and start their upward climb toward the stars!