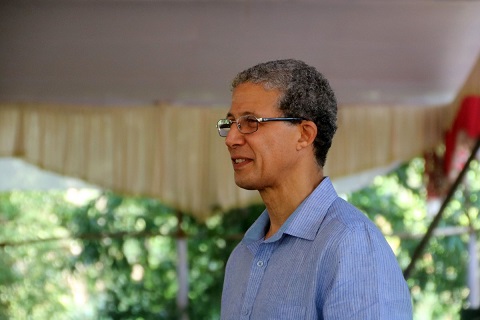 The author speaking in Adyar

Recently, during the course of a week, I had the opportunity to be exposed to three stimulating streams of thought: two from conversations, and one from a written article. Each was framed according to its own particular sphere, but, at least for me, there seemed to be a uniting thread of relevance to living a spiritual life.

(1) The first was a conversation that took place among three people: two Tibetan Buddhist Rinpoches and a political figure and philosopher in the Indian social and political realm. The conversation was supposed to cover the theme of “Ethics, Meditation, and Wisdom in a Turbulent World”. In actual fact, the conversation stopped at ethics. Ethics (sila), meditation (dhyâna), and wisdom (prajñâ) are the final three perfections (pâramitâs) as listed in Buddhism and in The Voice of the Silence by H. P. Blavatsky (HPB).

The realm of ethics is often expressed in terms of specific moralities — things that you do, and things that you do not do. Generally, what you should not do gets the greatest attention, much like the Ten Commandments of the Old Testament — “Thou shalt not . . .” So it is with the pañcha-sila, or the Five Precepts: no killing, no stealing, no lying, no taking of intoxicating substances, and no wrong use of sexual functions. In its most superficial sense these are behavioral prohibitions related to outer actions. As with all valid teachings, the intent and effects of attention to these ethical precepts are not isolated to our outer living

The focus of this ethical approach is to do no harm (ahimsa) to ourselves, or others, by abstaining from killing, stealing, lying, or intoxication in its varied forms. We observe our tendencies to steal praise or recognition from others, the various untruths we tell ourselves to prop up our chosen identities, and so on, and we choose to refrain. Only when we come to see the insidious effects of our unaware habits of mind can they change. The direction of the practice is that through the cultivation of ethics the mind is set on a proper course — the mind is protected. Nagarjuna, the great Buddhist saint and philosopher, made the comment: “Without the discipline of protecting the mind, of what value are all other disciplines?”

In order for any structure to stand it requires a proper foundation. Without the grounding of an ethical foundation a spiritual practice is not supported, and sooner or later shows its weakness. An intention rooted in ethics protects the mind. From what? From itself. This was one conversation during the course of the week.

(2) Another stream of thought that I encountered was related to the way we look at the nature of the human being and the universe. Generally our thought moves from densest matter, to ever finer grades of matter, to the realm of Spirit. A theosophical point of view provides a couple of sevenfold ways to view it. We often think in terms of physical, etheric, astral, mental, spiritual (buddhic), âtmic, and their corollary terms.

Lucy Oliver is a contemporary thinker deeply rooted in the Ageless Wisdom tradition. In an article she tried to reframe the discussion. The way she frames it is in terms of surfaces, flow, rhythm, and field. The terms are quite different and in some ways foreign. But to some degree it has great value, because it forces us to view it in a different way.

Surfaces are everything that we contact with our senses, the physical things that we sense in the world. In Indian spiritual tradition the senses are termed the jñânendriyas, or organs of knowledge. These are our windows on the world, the areas that we think of as the most basic reality: the room we sit in, the body we inhabit, the things we smell and see, all of the things that are reported to us by our senses.

One of the comments from HPB was: “The first necessity for obtaining self-knowledge is to become profoundly conscious of ignorance; to feel with every fiber of the heart that one is ceaselessly self-deceived.” She was not only referring to ignorance in the world around us, in the political, or social realm. We have to be convinced of our own ignorance: that what we see as “real” in the world is utterly incorrect and partial. It begins with the recognition that our senses only give us partial information.

A bumblebee in this room will see a range of the spectrum of light far beyond what we are capable of seeing. A dog will be able to sense smells of people who passed through the room days ago. Our senses are extremely limited and their reporting misguides us continually. Yet we form, cling to, and demand that others accept very solid ideas based on the inadequate reports of our senses.

There is a foundational concept that everyone and everything is looking for happiness. Happiness could be said to result from the capacity to flow among these surfaces. So long as any area of sensation holds us, fixes our attention to it, we find ourselves stuck in a repetitive process of fighting, or fulfilling the sensory demand. This is a psychological process that involves not merely the senses, but our emotional and mental reactions. When we find that our movement is relatively unrestricted, which is to say that our sense of attachment or aversion to the sensual surfaces is reduced, we experience a state of flow. Like water in a stream, we flow around what might otherwise appear as obstacles, and we feel happy.

Rhythm expresses the idea that there are cycles in which we participate. These cycles operate beneath or beyond our awareness and control and shape our experience of the world. Everything from the cycle of breath, to the circadian rhythms of waking and sleep, to the progression of the seasons, cycles of evolution, to the grand cycle of cosmic manifestation and absorption, fall within the idea of rhythm.

Our sense of flow is an individual mental and emotional experience of expansion and freedom within the grander pattern of cycles, or rhythm. Flow occurs within the world of experiences, but to rise beyond mere experiences is the nature of the spiritual life. Actual silence, where the experiencing mind ceases its activity, is the direction toward which we point ourselves. In the process of becoming quiet, still, and ultimately silent, we connect with ever deepening levels of these all-encompassing rhythms.

In the world’s Ageless Wisdom traditions there are examples of extending consciousness that are given. In Sir Edwin Arnold’s poetic rendering of the Buddha’s awakening, The Light of Asia, at the end Arnold expresses the experience thus: “The dew drop slips into the shining sea”. It is such a beautiful example of the extension of awareness that occurs when the dividing surface of self is merged with the greater whole.

We think of the ocean as a great body of water, but within it there are virtual rivers or currents flowing at different depths and directions. The ocean is not just one thing, it is one all-embracing life with many different currents that occur within it. In many ways this expresses the idea of field. The spiritual life that we attempt to cultivate involves connecting ourselves with one or another of those currents which flow within this greater whole. In that sense surfaces, flow, and rhythm are ultimately united within the field of universal consciousness, or Spirit.

(3) The third stream of thought resulted from a conversation with an educationist, who is also a prominent business person. In these types of conversations different sorts of ideas creep in. This person used a term for the benefits of education — “the multiplier effect”. It is an economics term that was being applied to education. Basically it quantifies the proportional increased return resulting from an investment of a specific amount. The idea being examined was the nature and degree of positive change in Indian society that the investment in the education of a child ultimately provides.

In all of these three conversations I found my involvement colored by a perception of the Theosophical Society’s purpose. So, for the economic idea to work in this realm, it has to be translatable into something that fits a spiritual path. Again, we turn to some of the things that HPB and others have said.

HPB made many statements about the inherent brotherhood of humanity, or oneness of all life. She expressed this in many different ways: “It is an occult law . . . that no man can rise superior to his individual failings without lifting, be it ever so little, the whole body of which he is an integral part. In the same way no one can sin, nor suffer the effects of sin, alone. In reality, there is no such thing as ‘separateness’ . . . the nearest approach to that selfish state which the laws of life permit is in the intent or motive.” Consciously or unconsciously, we are either purifying, or polluting the stream we all share.

The mixture of these three avenues of thought — the protection of the mind that is emphasized in ethics, or sila, the perception of the self as a stream functioning within an oceanic consciousness, and the fact that everything that we add to that stream, multiplies its effect beyond the bounds of our awareness — is an important avenue for us to consider. There is a thread connecting these seemingly isolated ideas, as there is a thread that connects anything and everything, when we look more deeply.