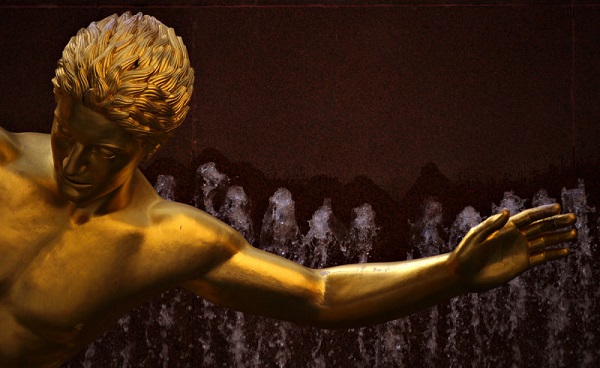 How ironic that in New York City, arguably the capital of modern culture and sophistication, in the middle of the Rockefeller Center, prime symbol of material power and wealth, stands a shining golden sculpture of a mythic figure, actually a god carrying a flame, a burst of fire, in his right hand. He is surrounded by the heavens, a ring representing the astrological constellations.

One gets the sense that he is moving swiftly, flying down from the peak of a mountain (the sculpture’s base), hurrying to his destination before the flame is extinguished. Most people are not exactly sure who he is, missing the inscription on the marble retaining wall behind him, and certainly missing the irony that he is a god of compassion and sacrifice, not the patron saint of opulence and power in spite of being painted in gold. The inscription reads: “PROMETHEUS, TEACHER IN EVERY ART, BROUGHT THE FIRE THAT HATH PROVED TO MORTALS A MEANS TO MIGHTY ENDS (AESCHYLUS).”

Prometheus, divine Titan, a kind of rebel angel, who, out of compassion for poor, obtuse humanity, brought them the divine fire, taught them the arts and sciences, but paid a heavy price for tricking Zeus and disobeying the chief god. His act was a sacrifice; for he foresaw the consequences of his action. Humanity also paid for its awakening of consciousness. Hesiod, the Greek poet, relates that “Zeus created the woman Pandora and sent her down to Epimetheus (‘hindsight’), who although warned by his brother Prometheus (‘foresight’), married her anyway. Pandora took the lid off the jar she carried, and evils, hard work, and disease flew out to wander” among humankind.

On one level, Prometheus and Epimetheus together represent the dual aspect of manas, or mind, the former portraying the free, spontaneous expression of the spiritual, intuitive mind, and the latter, the logical, analyzing lower mind, ideally the instrument of the higher. On a more macrocosmic level H. P. Blavatsky points out in her master work, The Secret Doctrine, that the Promethean sacrifice represents a great evolutionary crossroad when the evolving human form was prepared for the involving spiritual consciousness of more spiritual beings (mânasaputras), who incarnated into flesh and provided the bridge, or spark, for the expression of spiritual consciousness through the human form (vol. II).

The biblical myth of Adam and Eve in the Garden of Eden as well as the story of Lucifer, the fallen angel (whose name incidentally has for its root, lux, or light), also represent this evolutionary juncture where self-conscious human evolution began, strapped with responsibility, free will, and the real possibility of a conscious spiritual life on Earth. And here we find ourselves countless generations later still seemingly under the curse of Zeus. Let us remember Prometheus and the possibilities he brought; let us remember our spiritual heritage and reclaim the fire.