In the Light of Theosophy - DREAMS 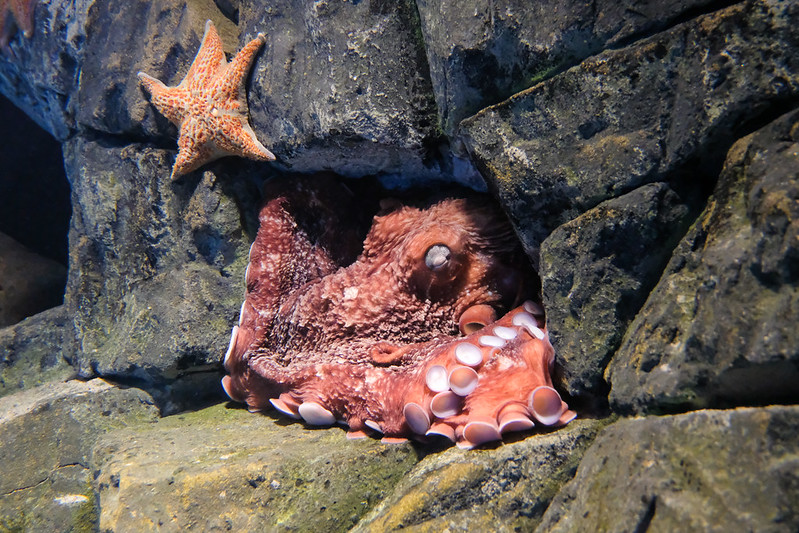 Sleeping (and dreaming) Octopus next to a Starfish

[This article appeared in the May 2021 issue of The Theosophical Movement. For more articles published in this excellent magazine follow this link: http://www.ultindia.org/previous_issues.html]

Researchers at the Federal University of Rio Grande do Norte in Natal, Brazil, have found that octopuses change color when they sleep, and that might be because they are dreaming. In fact, octopuses have been observed to pass through two distinct stages of sleep, active and passive. These conclusions are based on rigorous observations, through day and night periods, covering 180 hours.

They found that octopuses slept for more than half the time during the day, and that it was quiet, passive sleep. This passive sleep was interrupted every 30 to 40 minutes by a brief period of active sleep, lasting 1 to 2 minutes. It was during this active state that the researchers observed changes in body color and texture. They also noticed movement of their arms and eyes. To ascertain that the animals were truly asleep, the researchers presented them with a video of crabs, and some other vibratory stimuli, to which the animals did not react, as they would in their waking state. A similar sleep pattern occurs in birds and reptiles.

Mammals dream the most during REM (Rapid Eye Movement) sleep. Researchers suggest that the active sleep state in octopuses might be analogous to this REM sleep. Most likely what appears to be a dream in octopuses is a very short behavioral sequence, and that it is not a narrative. Researchers feel that it would be of interest to observe their brains, as they move from waking to passive and then active sleep, writes Donna Lu. (New Scientist, April 3, 2021)

Studies have shown that smaller animals like voles, rats and cats, with higher metabolic rates need more sleep than bigger animals. High metabolic rates generate “free radicals,” which are extremely reactive chemicals that damage or even kill brain cells. It is believed that reduced metabolic rate during dreamless sleep or “Non-REM sleep,” may give these damaged brain cells a chance to repair themselves. (Scientific American, November 2003)

Explaining the necessity for sleep in human beings, H.P.B. writes that according to occult philosophy, there is “periodical and regulated exhaustion of the nervous centres, and especially of the sensory ganglia of the brain, which refuse to act any longer on this plane.” Hence, during sleep they get a chance to recuperate their strength, otherwise they would become totally unfit for work during waking state. Further, she observes that the dream state is common to all men as well as animals, from the highest mammalia to the smallest birds, and even insects. (Transactions, pp. 70-71)

In human beings, the principles which are active during ordinary dreams are Kama (desire nature) and mechanical activities of the lower mind. During waking state, we are receiving impressions and sensations, which are stored in appropriate nerve centres. During sleep, memory acts mechanically and reproduces past sensations. Our brain, in falling asleep is like last embers of a dying fire. Any idea or event that impressed itself on the active brain during waking hours can produce dreams.

We know that the psychic element or Kama-manas is common to both the animals and human beings. H.P.B. observes that every being endowed with physical brain or organ approximating there to, must dream. Every animal has physical senses through which it receives impressions. These senses are dulled during sleep, but memory still acts mechanically, reproducing past sensations. “That dogs and horses and cattle dream we all know, and so also do canaries, but such dreams are, I think, merely physiological” (Transactions, p. 70). To some extent, this is proved in an experiment conducted by scientists at Massachusetts Institute of Technology. A number of mice which were fitted with electrodes in their brains to record the brain activity when they explored the maze and came out of it, exhibited similar neural activity when they fell asleep later; indicating thereby the re-living of their experience of waking state during sleep