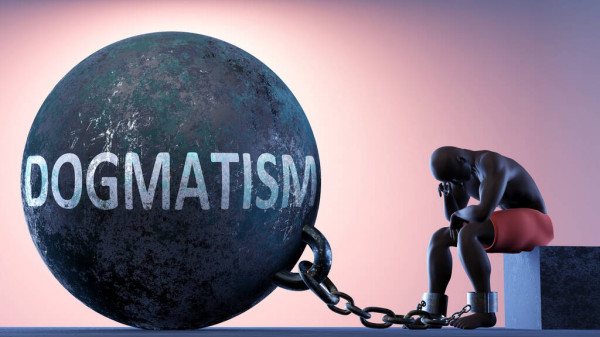 The Theosophical Society was founded to destroy dogmatism. This is one of the meanings of its first object - Universal Brotherhood. And Col. H. S. Olcott in his inaugural address in 1875, at Mott Memorial Hall, New York, said that such was the object in view, citing the bad effect that intolerance had had in the past. That address was read by Mme. H. P. Blavatsky before its delivery, or its contents were communicated to her, so that it had her assent, for she was present when it was delivered.

In The Key to Theosophy, in the "Conclusion," H.P.B. again refers to this subject and expresses the hope that the Society might not, after her death, become dogmatic or crystallize on some phase of thought or philosophy, but that it might remain free and open, with its members wise and unselfish. And in all her writings and remarks, privately or publicly, she constantly reiterated this idea. Of this the writer has direct evidence as to her statements in private.

If our effort is to succeed, we must avoid dogmatism in theosophy as much as in anything else, for the moment we dogmatize and insist on our construction of theosophy, that moment we lose sight of Universal Brotherhood and sow the seeds of future trouble.

There is a great likelihood that members of the Society will insist on a certain orthodoxy in our ranks. They are already doing it here and there, and this is a note of warning to draw their attention to the danger. There is no orthodoxy in our Society. Even though nine-tenths of the members believe in Reincarnation, Karma, the sevenfold constitution, and all the rest, and even though its prominent ones are engaged in promulgating these doctrines as well as others, the ranks of the Society must always be kept open, and no one should be told that he is not orthodox or not a good Theosophist because he does not believe in these doctrines. All that anyone is asked to subscribe to is Universal Brotherhood, and its practice in the search for truth. For the efforts of those who are thus promulgating specific ideas are made under the sanction of the second object of the Society, which any one is free to follow or to refuse to follow as he sees fit. One may deny - undogmatically - reincarnation and other doctrines, or may assert belief in a personal or impersonal God, and still be a good member of the Society, provided Universal Brotherhood is subscribed to and put into practice.

If a member says he must formulate a God, or cannot believe in Reincarnation, none other should condemn or draw comparisons, or point to the writings of H.P.B. or any one else to show that such a member is untheosophical. The greatest minds on earth are puzzled by great ideas such as these, and yet, holding them, can still search for truth with others in a perfect spirit of toleration.

But at the same time it is obvious that to enter the Society and then, under our plea of tolerance, assert that theosophy shall not be studied, that the great body of thought and philosophy offered in our literature shall not be investigated, is untheosophical, unpractical, and absurd, for it were to nullify the very object of our organization; it is a dogmatism that flows from negation and indifference. We must study the philosophy and the doctrines offered to us before we are in a position to pass judgment and say that they are not true or that they shall be rejected. To judge or reject before examination is the province of little minds or prejudiced dogmatists.

And as the great body of philosophy, science, and ethics offered by H. P. Blavatsky and her teachers has upon it the seal of research, of reasonableness, of antiquity, and of wisdom, it demands our first and best consideration in order that we may with fitness conclude upon its acceptation or rejection.

So, then, a member of the Society, no matter how high or how low his or her position in its ranks, has the right to promulgate all the philosophical and ethical ideas found in our literature to the best ability possessed, and no one else has the right to object, provided such promulgation is accompanied by a clear statement that it is not authorized or made orthodox by any declaration from the body corporate of the T.S. Our Society must be kept free and open, no matter if, because we refuse to formulate beliefs as a Society, we remain small in number, for we can always be strong in influence.

We have 300 guests and no members online