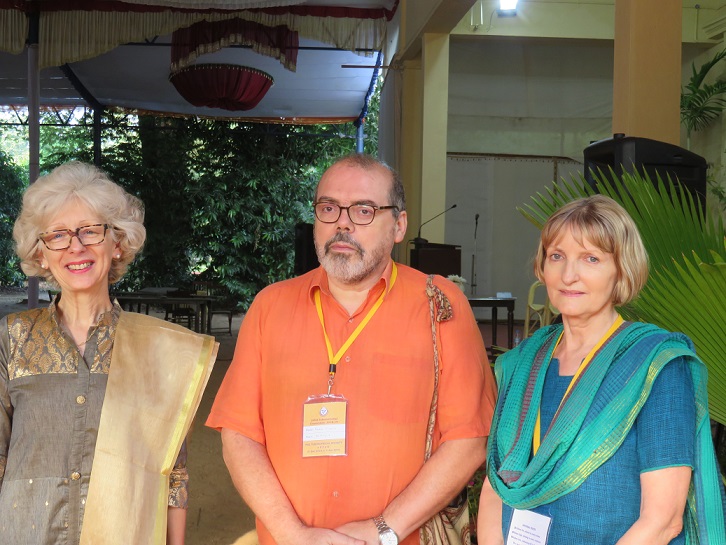 The author with on his right Patrizia Calvi from Italy and on his left Linda Oliveira, his wife. Photo taken at the Adyar Theatre

Shortly after the death of Madame Blavatsky, in 1891, her group of students in London naturally dispersed, as she had not appointed a successor to continue her work as a teacher of Esoteric Philosophy. Several of them continued to work for the Theosophical Society with headquarters at Adyar, India, while others decided to follow William Q. Judge, after the secession of the then American Section from the Parent Society in 1895.

It is only natural and human that those who had the great privilege of studying and working with a person like HPB developed not only a great affection for her but also a deep sense of loyalty to her and to her work. After all, she was the embodiment of living Theosophy, that spirit of utter self-sacrifice in the service of humanity as well as of profound wisdom and insight, while at the same time she was vitally human, as her short temper and emotional reactions fully demonstrated.

But when we look back at that period shortly after her death we can also see there, in hindsight, the beginnings of what can now be termed the Blavatskyan theology, which can be defined as the presupposition that only what Madame Blavatsky and her Teachers wrote is Theosophy. Those of her students and others who helped to frame such a theology were naturally moved by their deep loyalty to her, but obviously ignored her many warnings against it scattered throughout her writings. As a result, the world view presented by the Blavatskyan theologians ascribes such an importance to IIPB's writings that it resembles the attitude of fundamentalist sects to Holy Writ: a monolithic, unquestionable and divinely-ordained teaching, not to be questioned, investigated and enquired into.

It may be useful to remember a few of Madame Blavastky's pre-emptive warnings against a Blavatskyan theology:

In its capacity of an abstract body, the Society does not believe in anything, does not accept anything, and does not teach anything. (l)

The Theosophical Society does not have an official teaching. This may upset some members, but it is a fact. If the TS ever adopts an official teaching that will be its death-knell, for it would mean that the spirit of enquiry, which is essential to Theosophy, would be lost. The fact that the Society does not have an official teaching does not mean that Theosophy is secondary to its work. On the contrary, it is its very core. But here we have to remind ourselves that in its deepest meaning, as HPB mentioned so many times in her writings, Theosophy  is altruism, an understanding of life and its relationships guided by wisdom, not merely by knowledge, in the worldly usage of this word. Again and again she wrote that the study of Theosophy should purify the mind and heart, and so lead to a life of active, selfless service. HPB's statement quoted above makes it very clear that the Theosophical Society's work is not based on belief, acceptance or authority.

The following was written by her as early as 1888, which is, interestingly enough, the same year The Secret Doctrine was published:

Orthodoxy in Theosophy is a thing neither possible nor desirable. It is diversity of opinion, within certain limits, that keeps the Theosophical Society a living and a healthy body, its many other ugly features notwithstanding. Were it not, also, for the existence of a large amount of uncertainty in the minds of students of Theosophy, such healthy divergencies would be impossible, and the Society would degenerate into a sect, in which a narrow and stereotyped creed would take the place of the living and breathing spirit of Truth and an ever growing Knowledge? (2)

One wonders what could be clearer than this as a warning against dogmatism in the field of theosophical studies. Diversity of opinion is important for we learn from each other that no opinion can ever represent the Truth.

In a well-known passage in the Majjhimanikaya, the Buddha declared: “The Tathagata has no views.” He who had fully awakened to Truth did not hold particular views on life and its intricacies. He did not need to, for he could see life at its greatest depth. The theosophical teaching also points to the same experience of the oneness of all existence once the mind is purged of its age-old conditioning: the deeply ingrained sense of separateness from the rest of existence. Every form of opinionatedness is rooted in attachment as well as in self-importance, which necessarily diverts the individual seeker from the path of wisdom and compassion. Therefore, a fundamentalist or orthodox view of Theosophy contradicts the very spirit of the Wisdom-Tradition, which is continuous exploration and realization of its timeless principles in order to benefit all life.

HPB reiterated this view in another of her letters to the American conventions:

Therefore it is that the Ethics of Theosophy are even more necessary to mankind than the scientific aspects of the psychic facts of nature and man.(3)

Adherents to the Blavatskyan theology are always keen to emphasize the descriptive aspects of the universal processes as depicted in The Secret Doctrine, which is the source text of modern Theosophy. And if any author of the so-called second generation presents his or her understanding of the teaching, in their own words, without necessarily conforming to the holy writ, they are automatically branded traitors of original Theosophy. However, the expression original Theosophy is a contradiction in terms, for it seems to imply that Theosophy began in 1888 with the publication of The Secret Doctrine, which is clearly untenable, for Madame Blavatsky refers, again and again, in that work to the Secret Doctrine as a synonym for the Archaic Esoteric Wisdom existing in all ages,

Yet some students, like Annie Besant and C. W. Leadbeater, who continued to present Theosophy to the world after the death of HPB according to their own understanding and following the admonition in the Mahachohan's letter to popularize a knowledge of Theosophy, placed a great deal of emphasis on selfless service as the core of the theosophical life. They may have made controversial statements, they may have made mistakes in describing their observations of life and Nature, but they made very clear the ethical nexus between. knowledge and service: the greater our knowledge, the greater is our responsibility to use it as an instrument for the overall good of all creatures. Annie Besant also echoed in her writings the spirit of non-dogmatism which is essential in theosophical studies:

No intellectual opinion is worth the holding unless it is obtained by the individual effort of the person who holds that opinion. It is far healthier to exercise our intelligence, even if we come to a wrong conclusion and form an inaccurate opinion, than simply, like parrots, to echo what other people say, and so put out of all possibility intellectual development. (4)

Is the following another warning by HPB against dogmatism and separateness?

Many are the energetic members of the Theosophical Society who wish to work and work hard. But the price of their assistance is that all the work must be done in their way and not in anyone else's way. And if this is not carried out they sink back into apathy or leave the Society entirely, loudly declaring that they are the only true theosophists. Or, if they remain, they endeavor to exalt their own method of working at the expense of all other earnest workers. This is fact, but it is not Theosophy. (5)

What makes a person believe that his or her view or method of work is the only right one? What makes a student believe that only a particular presentation of Theosophy is the right one, all the others being either wrong or tampered with? Is there a deep insecurity lurking in their minds and therefore they need a hard and fast picture of reality that never changes? Does their sense of self feel threatened by the ceaseless movement of reality? Whatever are the answers to these questions it becomes clear from HPB's remarks that humility and openness of mind are essential qualities for those who wish to work for Theosophy, which is to search for Truth freely and fearlessly. There are so many things that we do not know, our present knowledge representing just a tiny fragment of the overall existence. As Annie Besant wrote:

It was once said of the Christian scriptures by a devotee that they contained shallows in which a child could wade and depths in which a giant must swim. A similar statement might be made of Theosophy, for some of its teachings are so simple and so practical that any person of average intelligence can understand and follow them, while others are so lofty, so profound, that the ablest strains his intellect to contain them and sinks exhausted in the effort. (6)

Finally, it may be important to realize that, paradoxically, Theosophy is not a knowledge-based teaching but a wisdom-based one, as the very word “Theosophy” indicates. Wisdom can never be confined to knowledge for it is a non-mediated experience of the sacred heart of all existence, which completely transforms the human mind, allowing it entrance into a vastness never experienced by thought, which is the knowledge of things as they are (epopteia). In a letter to A. P. Sinnett, one of the most prominent members of the Theosophical Society at that time (1883), one of HPB's Teachers alluded to this deeper dimension in life and gently warned him about anxiously clinging to the printed word:

You share with all beginners the tendency to draw too absolutely strong inferences from partly caught hints, and to dogmatize thereupon as though the last word had been spoken. You will correct this in due time. You may misunderstand us, are more than likely to do so, for our language must always be more or less that of parable and suggestion, when heading upon forbidden ground; we have our own peculiar modes of expression and what lies behind the fence of words is even more important than what you read …

This article was also published in The Theosophist, MARCH, 2003

To read recent issues of The Theosophist, click HERE