The Paralysis of Movement: Liberating Mankind from the oppression of a Djinn 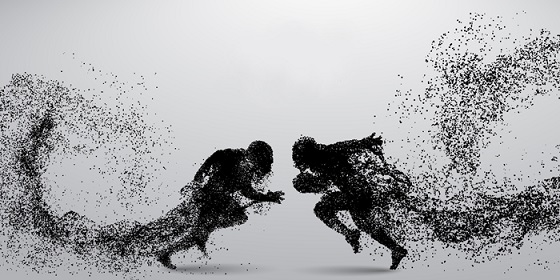 In the book Man: Whence How and Whither the authors, Annie Besant and Charles W. Leadbeater, trace the evolution of man from antiquity, mapping physical and geographical movements of the human race. From the antediluvian third root race, or Lemurian, to the present ongoing fifth root race, which emanated in Central Asia, this evolution of man has been accompanied by an expanded consciousness. The authors prophesized the coming of the next phase of human evolution in the form of an emerging sixth root race, in an area around California, this in the distant future. The nascent signs are no doubt becoming visible, California being the epicenter of the New-Age Movement. The concept of root races originally appeared with the publication of The Secret Doctrine by Helena Petrovna Blavatsky, who collated a body of esoteric knowledge, generally referred to as Theosophy. Both works have a thread of commonality: i.e. movement.

The movement of man occurs physically through movements through geographical spaces and mentally through the spiritual dimensions of self-realization. The dynamics of global movement enable both the physical flourishing and as well as the unfoldment of the mental faculties in the evolutionary process. In fact, movement has been the very essence of survival of the species.

Blavatsky herself was a widely travelled woman during her time. She traversed the mountains of Peru and stage coached across the American wild-west, arriving at the shores of Mexico. She sailed through the southern tip of Africa to the port of Bombay and onwards to her final destination: the valleys of Tibet, perched high in the trans-Himalayan regions.

The biggest body blow and crippling effect of the Covid-19 Pandemic has been the restriction of movement of humans. Airports are sealed-off and railroad stations are shut-down, pushing mankind to forced hibernation. The human body is an amazing organism which works best when it is able to move. Conversely, lack of movement degenerates the human make-up's vital cellular, emotional and spiritual energy systems.

In the words of Ms. Krista Scott Dixon, who is the author of The Essential of Sport and Exercise Nutrition:

“As Humans we move our bodies to express our, wants, needs, emotions, thoughts and ideas, ultimately how well we move determines how well we engage with the world, establishing a larger purpose in life.”

Physical movement promotes chemical changes in the body. It stimulates neural pathways and boosts immunity. Dr. James Levin of the Mayo Clinic in Arizona conducted a study in 2013 on the importance of movement. He has come to the conclusion that if San Francisco were to be converted to a strictly pedestrian, foot-based city from the present average of a four minutes’ walk to an eighteen minutes’ walk per day, there would be a 13% decrease in premature deaths.

The animal species also survives on movement; therefore, it is cruel to cage birds, even if we are tempted to feed and pamper them. The salmon species of fish begin life in rivers and migrate downstream to the ocean. After several years of marine meandering, these fish head back upstream to spawn new generations in the rivers again. Certain animals navigate using the position of sun and the stars, while others sense and use the earth’s magnetic field as their GPS.

The Chola seafarers of the tenth century sailed from the Coromandel coast in Southern India, following the trail of itinerant sea turtles from the Indian Ocean to the Malay Archipelago. As in the animal kingdom, settling, migrating and, in many cases, re-homing, are integral aspects of the life of human civilization.

The evolution of the human species has always been closely tied to physical movement. This is as a result of humanity’s innate impulse to movement and social activity. In her article titled “Wandering with Sadhus, Ascetics in the Hindu Himalayas”, Sondra L Hausner, a sociocultural anthropologist, specializing in South Asian religion and culture, states:

“…these Sadhus are constantly on the move, to avoid attachment with places and people. Although these Sadhus form an alternate community; their home is not one that is located in one single place.”

This, in essence, is the ethnographic portrayal of an ascetic. The bio-cultural foundation of human movement is related to the human propensity to manifest movement, through exercise, sports, dance, theater, yoga, the joy of certain kinds of manual labor and other expressions of human physical achievement. Humanity’s revolutionary and evolutionary success over the last four million years reflects the critical importance of movement.

Our genetic makeup has developed the anatomy and physiology that has produced unique human movements, carrying forth millions of years of evolution. These biological features have and will continue to influence, in turn, human cultural expression. It was not until the 1960’s that application of science to the study of human culture was recognized, and the credit goes to Dr. Clifford Geetz. He introduced symbolic anthropology, which gives prime attention to the role of symbols in constructing public meaning.

As more research continues in human behavioral ecology and its relation to neuroanatomy, movement is identified to be an integral neurological component of the human physical body. More specifically, research studying the brains of humans and other mammals is pointing to the interconnectedness of the neuro pathways of the “movement regions” with other critical brain regions, such as those connected to cognitive performance, emotional well-being and the immune system, demonstrating that movement is very much a neurobiological component of the overall wellbeing of the human physical body.

In the words of Robert Sands, author of Anthropology of sport and Human Movement:

“It is clear that the crucible of our evolution produced a human biped capable of movements, quite unique to mammals. These movements became instrumental in adopting to selective agents in the environment, over the last four million years.”

In the past decades, our movements have already been subsumed by science and innovation. How humans will survive the post Covid-19 decade, century or millennium, in part is certainly dependent on the role of how man’s movement pattern plays out in the future.

It is said that the wheel is one of the greatest inventions of man as it defies time, space and distance. Will it become obsolete, out of disuse? Will this viral-triggered movement restriction play havoc on the survival of our species—perhaps not so much through the direct impact its deadly infection of millions of people, but through its indirect, yet fundamental impact, on billions of people via the paralysis of a vital element of what it is to be a human being—that of movement?

May we join together and unleash humanity from this dreaded Djinn. Are we beginning to realize the interconnectivity of all beings, or as enlightened Theosophists chant: “ALL IN ONENESS AND ONE WITH EVERY OTHER” … ?

This is our credo. Thus, we need to win the first battle against Covid 19, redeeming mankind from the Paralyses of Movement.

Will Saint Francis of Assisi reappear to tame the Wolf ?

Annie Besant and Charles Leadbeater, Man: Whence How and Whither, Google books.