The Myth of Man's Origin and Development – part one 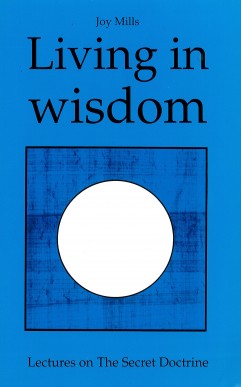 [Chapter Five in Living in Wisdom: Lectures on The Secret Doctrine, copyright 1989, Theosofische Vereniging in Nederland / Amsterdam. The booklet was transcribed from a class given at the August 1988 Summer School of the Dutch Section of the Theosophical Society.]

We'll turn now more directly to the study of ourselves. We have been looking at some of the great metaphysical concepts concerning the origin and development of a universe, and remember it is suggested at least that the intent of The Secret Doctrine -- not only those volumes by H.P. Blavatsky but the esoteric tradition itself -- is to awaken a new mode of consciousness. When we turn then to the material in the second volume dealing with "Anthropogenesis," we must keep very clearly in mind that central purpose, otherwise we are likely to be lost in very confusing details.

What I hope we can see is the central thread of our origins and development. The occult story of our origins and development is really a tremendous myth. It is the story that must always be told therefore in terms that are metaphorical and poetic. At times however, the story that is told in the 49 Slokas of volume II would seem to stretch our credulity. The history that seems to be referred to seems too fantastic and too removed from our present condition to be either believable or even relevant. But I would suggest that the importance of this part of the two volumes, The Secret Doctrine, lies in their being a guide to our true nature, not in their being a history of the evolution on the surface of this planet. Because they show us our origins, they also show us our way of return, not through the rejection of life, but through the flowering of our still unrealized potentials.

Our physical evolution must necessarily form part of the story, but beyond or behind that particular story -- the physical evolution -- we begin to see the patterns of events which come from and are symbolic representations of the patterns in the human soul. However you want to explain the matter, the men of the past are present in us now. That is, their psychic patterns, if you like, are ours. And in a similar manner, the men of the future are also within us. So our studies are always studies of us -- as we were, as we are, and as we will be. In the last analysis, if I may put it this way, we must come to know that we are gods. The gods exist within us -- and so do the devils -- but it takes a god to become a man. All the ancient myths and legends refer to this fact and the occult tradition reminds us that it takes a man to become a god again.

So one of the truly profound doctrines of the esoteric philosophy is that we are the repository of and the elements comprising the universe. This is certainly not fully recognized by contemporary science but is coming to be recognized by contemporary psychology, particularly that branch of psychology following the work of Carl Jung. Everything resides in us; we are the epitome of all that is -- the microcosm of the macrocosm. As the Greek philosophers had it, we are "the measure of all things."

In addition, the esoteric philosophy teaches us that we also hold within ourselves the history of all that has ever been, all of what we may call the "inferior" stages of development through which we have passed. So we are both the storehouse, the repository of all past forms and of all future types. In this sense we throw off the past forms as we evolve through the ages, and each of those becomes in its turn what we may call a new "stock." This concept or doctrine has been called the concept or the doctrine of "vital off-throwings"; it is a very mysterious one. HPB refers to it, not in The Secret Doctrine , but in another place, as "the transmigration of life-atoms."

Now to understand all that is meant by what I have said so far, we need to consider what is called "the man-pattern," that is, the archetype of the manifested human being. Distinguish this archetype from the human being in manifestation; the pattern is called in The Secret Doctrine "the Heavenly Man." To use a term that is very much in use today, it is "the divine Paradigm." HPB tells us:

The doctrine teaches that in order to become the fully divine god, even the highest spiritual primeval intelligences must pass through the human stage. And when we say "human" this does not apply merely to our terrestrial humanity, but to the mortals that inhabit any world, that is, to those intelligences that have reached the appropriate equilibrium between matter and spirit as we have now, since the middle of the fourth root-race of the fourth round has passed. Each entity must have won for itself the right of becoming divine through self-experience.

So all that I have said so far is beautifully summarized in that one paragraph, but I have tried to put it first in a way that could perhaps be more easily understood -- mainly because HPB speaks of this subject as "so very mystical" and therefore the most difficult to explain in all its details and bearings.

What we need to recognize is that man stands as the middle term of the extent of being. There is a continuum of being, and the middle term is the human condition. We can say that our essential Self derives from the unmanifest and transcendental Root of Self. And again, that our Self is the individualized spark of incarnating mind. So on whatever level we speak of the self, it is finally only in us that we find any experiential point of reference. It is interesting that we use the same word "self" for many aspects of the movement on this continuum of being.

You may remember that when I spoke of the archetypal motifs of creation, one of those motifs was one of a ritual murder, in which the victim is the divine man. This in some cultures remained as a ritual murder. And then there arose in some cultures the substitution, so there arose the concept of the scapegoat on whom all of the burden of the sacrifice was placed instead of on man himself. It is interesting to trace how this concept has continued through history, because in one sense we still "murder" each other. We place on the other all the blame of whatever is buried within ourselves. Do not think we can so easily escape from the guilt of this ritual murder; it is a kind of distorted reflection of this ritual murder. I do not want to pursue this but I think you will begin to see some of its implications.

In the archetypal pattern, the victim is the divine man. In Hindu cosmogonies for example, it is PURUSA, the first man, the original person, who is in the shape of the cosmos. He has a thousand heads and a thousand feet. He extends beyond the world and covers the whole universe; and out of his body, the world is created. He is cut up, and each part of him becomes one aspect of the universe. We have this even in the remembrances in the Christian Eucharist. In all great traditions there is this ritual murder of the original man, and it is reflected in us. Our central task through all the aeons of development may be said to be the reassembling of the original man, the archetypal pattern. This is a reassembling which is done by making conscious the entire universe.

Now if one studies the great myths dealing with the emergence of the hero -- that is, the one who is now reassembling his own nature -- there can be seen seven stages in his development. And I propose that in some deeply mysterious way, these seven stages correspond to what have been called in theosophical literature the "root-races." This was a most unfortunate term that was chosen. It was a term that was not pejorative in the last century, it did not have bad connotations, but referred to a very profound concept and certainly did not refer to ethnic groups, although unfortunately it has been applied in this manner. I would like to remove the term "root-race" from all of our literature, because it has been so often misunderstood.

What is really referred to are the seven developmental stages through which we progress on our cyclic journey. Now in terms of the great hero-myth, these stages are given in this way. I just thought you might like to know how they are generally defined and we will look then at how they are defined in The Secret Doctrine tradition. The first stage is known as the "fire-thief," the thief who steals fire. Obviously this must refer to the coming of the mind. The second stage is the "deluge-survivor." Of course in this case it is the psychic nature which can flood consciousness, and one has to learn to survive that. One can see this today in those who are not surviving the "deluge" of the psychic glamour, who become overwhelmed by the glamor of the psychic realm, but the hero survives that stage. The third is known as the "dragon-slayer." Having slain the dragons of, shall we say, greed, jealousy -- all of the dragons that arise within us -- the fourth stage is that of the "prophet" or "instructor." The fifth is the stage of the "demigod," and the sixth the "divine scapegoat." One sees this very clearly in the myth of the Christos. The seventh then, which is well exemplified by the stage of Buddhahood, is the "world redeemer."

So we have to keep in mind that we are dealing with a symbolic account of psychic movements within us as living man. Consequently all the stones and waters, fathers and mothers, and so on of "Anthropogenesis," are glyphs -- symbols of the patterns of our inner and outer beings. Therefore I look at this as the tremendous myth which each one of us must live, and the pattern is already present within us. In the translation of a Tibetan text of Dr. Herbert Guenther -- one of the leading students of Tibetan literature who has translated it in his work THE MATRIX OF MYSTERY -- there is a very beautiful statement which points to the presence of this archetypal pattern, all of these stages, in all existent beings. This is going to be a little difficult, but because it is so beautiful I will give it in full:

In each body of every sentient being there resides pristine cognitiveness tending to coming into presence. It coils itself up in its own bed which is the continuum of being, the spontaneous "thereness" of being.

Not easy! But let us look at it, because it expresses a deep truth. In each body of every sentient being there is the original knowing -- here it is "pristine cognitiveness," but it is original knowing, primordial universal Mind that is present everywhere which is tending into, moving toward an expression. In its original state it is as though coiled up in its own being -- in its own bed, in its own nature -- which is the continuum of being, we talked about it. Now what is also being pointed at is that what we are engaged in is an uncoiling process which is accomplished through seven stages, and marks the coming into expression of the divine Paradigm.