Even if you die, there’s always Reincarnation 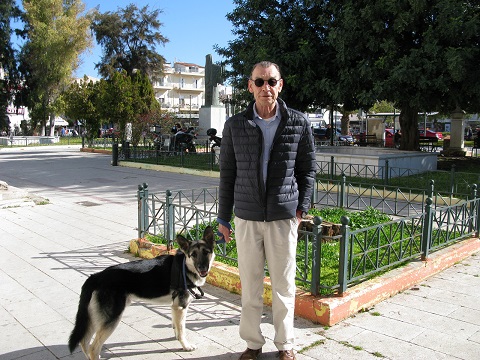 The author and his dog

Most cultures down the long and twisted corridors of history have believed in some form of re-birth or re-embodiment. The current widespread denial of reincarnation in the West is only a temporary rejection of the sanctity of this timeless truth. A combination of harshly materialistic and cynical science and the fake news about death peddled by the three Abrahamic religions of Christianity, Judaism and Islam have attached anathema status to this essential slice of the Ageless Wisdom teachings.

Despite this large-scale denial, there has been a steady and sometimes dramatic rise in the number of people in Europe and North America especially who actually do believe in reincarnation. The most recent surveys put this figure at between a quarter and a third of those questioned and this is hugely significant. Half a century ago that proportion was miniscule.

Re-birth, reincarnation, metempsychosis and similar concepts have, of course, been deeply embedded in the Eastern mindset for millennia thanks to Hinduism and Buddhism. Perhaps Covid-19 along with all the other crises and conflicts facing the world may bizarrely act as a catalyst in transforming many people’s notions of many things, death included.

Although reincarnation will never fully erase that fear of death which haunts so many people, it at least provides a plausible notion for the continuum of existence and the vital notion that life and consciousness can exist without a physical body. If we accept this crucial idea that we die and are re-born on a regular basis, it gives us a much greater perspective on existence in general. After all, this is one life out of many. And although it’s important, it is by definition only a temporary situation.

I’m not suggesting that mass death or a global lockdown caused by microscopic, spiked invaders will suddenly convince all the sceptics, cynics or materialists that there is a world beyond the physical and that life persists after death. But for those looking for more meaningful answers to the more profound questions of life, it may act as a powerful stimulant for new thinking.

So, if you or I do expire from this virus – or indeed any other cause – you can be certain of two things. One: that your death wasn’t ultimately down to corona virus, cancer or chemical weapons. It was almost certainly due to your karma, that unerring law of cause and effect which shapes our present lives because our thoughts, words, deeds and emotions in previous lives. Two: you will be back on Earth eventually in another place, at another time and with a different body and personality from the one you think you own in this life. But you will still be the same core soul-spirit, although hopefully a little more improved, modified and evolved than you were in your current life.

This virus isn’t just infecting and killing people. It’s fundamentally re-shaping our behaviour and consciousness in a major and unprecedented way. It may change the world more comprehensively than all the weasel words and sheep-speak of politicians, decision-makers and other influencers of the modern era.

Paradoxically, as well as a harbinger of doom and death, it’s also acting as a purging agent of change and a deep fumigant of human stupidity and cupidity. It represents both an opportunity to change and a stark warning that we can no longer behave the way we do. This virus has been such an emotional laxative it’s even temporarily eclipsed climate change hysteria. And here’s another great irony – it’s actually achieved many of the aims espoused by those green warriors of Extinction Rebellion by shutting down travel locally and internationally and drastically reducing movement. Cities are suddenly less polluted, the roads less crowded and much carbon-emitting activity suspended.

This pandemic may also provide a means and a mechanism for introducing people to the idea that they aren’t just humans who happen to have spirits but spirits who happen to be undergoing a human experience. It may entice people to think about bigger issues such as death and beyond and even persuade them that there’s more to life than work, leisure, food, sex, debt and consumption.

History shows us that wars, crises and conflicts tend to suddenly sharpen people’s spiritual aspirations. When the usual certainties have evaporated and our previous bloated sense of entitlement is trashed, we’re more likely to discover, explore and even embrace our inner being.

After the American Civil war of the 1860s, there was a sudden upsurge in interest in the fate of the dead coinciding with the rise of spiritualism as hundreds of thousands of wives, mothers, sisters and sweethearts wondered what had happened to their loved ones. A similar situation arose after the carnage of the First World War – and the Spanish Flu pandemic which followed claiming a further twenty million lives.

Under normal circumstances death is a distasteful topic for most people, a disagreeable subject for dinner party conversation and something to be ignored and avoided as much as possible. But at crunch-times like this the subject of human mortality is so ubiquitous that it can no longer be ignored. It has to be confronted because it is ever present and very real. Death is now the talking point and it’s not a moment too soon.

A century and a half ago Helena Blavatsky, that aptly named Godmother of the New Age, made a clarion call for humanity to particularly study and enshrine this ‘law of laws’ – reincarnation and karma. Interest in this concept has slowly spread to those places across the globe where such notions were previously alien. But these ideas have not spread with the same rapidity of the virus. The virus may indeed act as an accelerant.

As well as the truths about death, corona virus may also introduce more people to another key cornerstone of the Ageless Wisdom teachings: the law of cycles. Everything from an electron to a cluster of galaxies has an identical life-cycle: birth, growth, maturity, decline, death and re-birth. Too many people have been ignorant of this obvious truth for far too long and by doing so they’ve left themselves in a spiritual wasteland and existential cul-de-sac. We ignore cycles at our peril.

As well as being viral, this pandemic is also part of a greater cycle, a convulsive re-run of what happened a century ago with Spanish Flu. There have been many points in the past where (for no doubt esoteric reasons beyond our grasp) the population has suddenly been reduced – by famine, plague, pestilence, war and natural disaster. What is different about this scenario is that this isn’t a localised disaster but a truly international one whose grim realities seep into every pore of the planet.

As much as the modern unenlightened mind may shrink from the idea, this is part of the Earth’s natural rhythm and from time to time dramatic re-balancing is required to ensure equilibrium. Few have any clear understanding of this and so we can only speculate on what occult truths lie behind this pandemic. But we can be certain that it’s happening as part of a greater plan and this is the point in the cycle for it to take place.

Covid-19 may be one of the harshest teachers we’ve ever encountered – but perhaps it may prove to be one of the most effective. When it finally recedes and we face the aftermath perhaps there will be a more sophisticated understanding of death, re-birth, karma and the crucial importance of cycles.

We have 209 guests and no members online