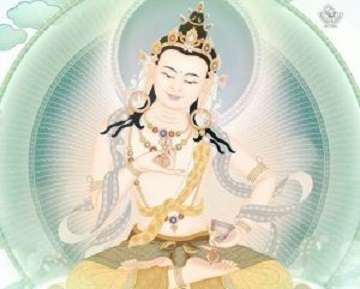 Q.What is the real difference between the Dhyani-Buddhas in the orthodox and the esoteric conceptions?Avery great one philosophically. They are—as higher Devas— called by the Buddhists, Bodhisattvas.

A.Exoterically they are five in number, whereas in the esoteric schools they are seven, and not single Entities but Hierarchies. It is stated in the Secret Doctrine that five Buddhas have come and that two are to come in the sixth and seventh races. Exoterically their president is Vajrasattva, the "Supreme Intelligence" or "Supreme Buddha," but more transcendent still is Vajradhara, even as Parabrahm transcends Brahmå or Mahat. Thus the exoteric and occult significations of the Dhyani-Buddhas are entirely different. Exoterically each is a trinity, three in one, all three manifesting simultaneously in three worlds—as a human Buddha on earth, a Dhyani-Buddha in the world of astral forms, and an arupa, or formless, Buddha in the highest Nirvanic realm. Thus for a human Buddha, an incarnation of one of these Dhyanis, the stay on earth is limited from seven to seven thousand years in various bodies, since as men they are subjected to normal conditions, accidents and death. In Esoteric philosophy, on the other hand, this means that only five out of the "Seven Dhyani Buddhas"—or, rather, the Seven Hierarchies of these Dhyanis, who, in Buddhist mysticism, are identical with the higher incarnating Intelligences, or the Kumåras of the Hindus—five only have hitherto appeared on earth in regular succession of incarnations, the last two having to come during the sixth and seventh Root-Races. This is, again, semi-allegorical, if not entirely so. For the sixth and seventh Hierarchies have been already incarnated on this earth together with the rest. But as they have reached "Buddhaship," so called, almost from the beginning of the fourth Root-Race, they are said to rest since then in conscious bliss and freedom till the beginning of the Seventh Round, when they will lead Humanity as a new race of Buddhas. These Dhyanis are connected only with Humanity, strictly speaking only with the highest “principles” of men.

From: Transactions of the Blavatsky Lodge, p. 50-51

We have 218 guests and no members online