The Relevance of Our Work 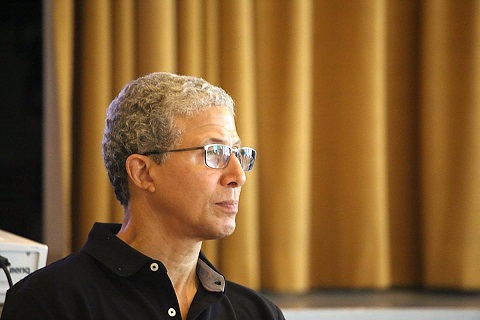 Tim Boyd conducting a meeting in the Besant Hall, at the International Theoeophical Centre in Naarden, the Netherlands

The theme for this 144th Convention is “Nurturing the Seed”. Although at this point we have heard many in-depth examinations, without over-laboring the theme I would like to add a few further thoughts.

The seed analogy requires some definition: a seed is an embryonic life enclosed in a protective shell. Our interest is not horticultural, but related to the soul — the Hidden Life within the confining shell of human personality. The eventual expression of that life depends on the dissolution of the shell in the proper way at the proper time. But how does one know that way and that time?

In At the Feet of the Master a young J. Krishnamurti makes a sweeping statement: “In all the world there are only two kinds of people, those who know and those who do not know, and this knowledge is . . .” what matters. The specific knowledge he referred to was evolution, in the sense of unfoldment of consciousness and its accompanying capacities.

Whether we are discussing the human soul, or the seed of a plant, the specialized knowledge involved in cultivating a seed is the domain of the gardener, that person who has gained knowledge through long observation, study, and practice. From experience, a good gardener knows the seed’s potential for growth and the conditions required for it to thrive: the quality of the soil, moisture, sun and shade, and seasonal cycles. In essence it is an experience-based awareness of the inter-dependence of things.

The best gardeners know something more: the power of human consciousness in promoting growth. The life-enhancing effects on living things of love, kindness, and intention are an active part of their awareness. Significant examples of this abound. In his book, Hidden Messages in Water, Masuru Emoto documented his research into the effect of human consciousness on the molecular structure of water. His water-crystal experiments involved exposing water in glasses to different words, pictures, or music, and then freezing and examining the aesthetic properties of the resulting crystals with microscopic photography. In his experiments water exposed to positive speech and thoughts would result in visually harmonious crystals being formed when that water was frozen. Negative intention would yield fragmented crystal formations.

When my daughter was in grade school her teacher assigned the class a science project of their choosing. She decided to attempt the well-known experiment where three sets of seeds are planted. One group of seeds is exposed to loving talk at intervals during the day; another receives negative speech during the same intervals; the third is not spoken to at all. In all other respects the light, soil, and moisture are the same. The result was that at the end of the growing period the seeds receiving the positive attention showed a measurable difference in the size of the sprouts.

Within the academic-science com-munity both Emoto’s research and my daughter’s seed experiment are relegated to the status of “pseudoscience”. This is a term normally used to label beliefs, theories, or practices considered scientific, but lacking any basis in scientific fact. The list of pseudoscientific fields is long — Astrology, Feng Shui, Rupert Sheldrake’s Morphogenetic Fields, Acupuncture (until its effects were scientifically demonstrated), Extrasensory Perception, Hypnosis, Psychoanalysis, and so on. In spite of the bias against scientific demonstration of consciousness as an inextricable agency in the natural world, there are many statistical studies showing the effects of consciousness that satisfy the scientific method standard.

A number of notable studies have been performed demonstrating the healing power of love. Because consciousness itself is not yet measurable, and, from a scientific perspective, is only revealed by its effects, the studies measured statistical effects. Using married couples with a positive relationship as the test group, a number of demonstrable effects were recorded. Among them are: people in a loving relationship tend to have fewer heart attacks and strokes; they live longer, have higher survival rates from major surgery and cancer; are less depressed; their wounds heal faster; thinking of a loved one lowers the blood pressure, etc. The true gardener/spiritual practitioner has an innate knowledge of these things.

There is a significant knowledge that the gardener lacks. He has no knowledge of the life force within the seed. Beyond the fact that it exists, and that it reveals itself and grows when given the proper conditions, it forever remains a mystery. His experience is that the application of his lesser knowledge leads to the expression of a greater life.

As spiritual practitioners we can also say that we know nothing of Spirit. The realm of what we can know is confined to the spectrum of the mind, which touches upon Spirit at its highest reach and on Matter at its lowest. What we can say about Spirit is limited to what we know of its “reflection” on the field of the upper reaches of mind — the “Higher Mind”. Similarly, we know nothing of matter. In the current understanding of science the totality of the known and studied matter comprising the universe amounts to approximately 5% of the amount of matter required for the universe to be expanding at the rate that it does. The other 95% has been termed “dark matter”, which does not absorb, reflect, or emit light. It cannot be detected except by its effect on the objects within the known universe.

The mind could be described as the “field” within which the soul’s seed is planted. It is the “location” where all of the work of spiritual practice takes place. The nature of that work has been variously described: “Know thyself” was the inscription carved into the stone above the temple of the Oracle of Delphi. The Buddha’s teaching said: “Be a light unto yourself”. H. P. Blavatsky (HPB) said that we must “paralyze” the personality. The great English poet, William Blake, gave an excellent indication of the nature of our work: “If the doors of perception were cleansed, everything would appear to man as it is, Infinite.”

This cleansing of the doors of perception is the work we do as individuals, and it begins with a realization. In HPB’s words, “The first necessity for obtaining self-knowledge is to become profoundly conscious of ignorance; to feel with every fibre of the heart that one is ceaselessly self-deceived.” We form fixed ideas on the nature of reality based on the most partial information. All of our organs / doors of perception are limited to an extremely narrow band of the electromagnetic, sound, taste, smell, and feeling spectrum as well. We need to recognize that the reporting from all of our avenues of perception is incomplete.

The path to a deepening understanding begins with the observation of the way we perceive and react in the world. We observe the body and its habits. The nervous movements we make when we sit or stand; the postures we adopt; the foods and environments we seek out; the way in which the breath flows into and out of the body. We begin to become conscious of all our normal bodily processes, not with a sense of judgment, but simply bringing them to the level of awareness. Most likely we will find that many of our normal habits do not contribute to a sense of well-being, but fragment our energy. Similarly, we observe our emotions. We learn to distinguish between bodily states and emotional currents that influence the body. We observe the physically stimulating effect of anger, the dulling effect of sadness, the uplifting energizing effect of happiness. From this process of observation we gain a sense of the emotions that contribute to our well-being.

The most important level of observation is with our thoughts, our mind stream. In the first letter written from one of the Mahatmas to A. O. Hume, a profound fact about the inner effects of thoughts was shared: “Every thought of man upon being evolved passes into the inner world and becomes an active entity . . . It survives as an active intelligence, a creature of the mind’s begetting . . . Thus, a good thought is perpetuated as an active beneficent power; an evil one as a maleficent demon.” The stream of thought unconsciously generated by each person “reacts upon any sensitive or nervous organization which comes in contact with it.” It is at this mind level that we have our greatest capacity to help, or harm.

Sincere engagement in this process of observation reveals certain deficits and opportunities; limitations and also powers latent within us. Our main revelation should be that at every moment we have the capacity to consciously evolve and transmit thought. The simple act of clearly “seeing” this truth resolves countless difficulties and uncertainties. This level of awareness leads to a condition of effortless response. When one sees that the road ahead is impassable and that an alternate route is open, it is easy to turn and go in a different direction. All of our actions — bodily, emotional, and mental — are subject to the same ordering principle.

With clarity of seeing comes a deeper, previously hidden potential. In this seeing process the shell encasing the embryonic life of the soul is dissolved. The Hidden Life, Light, and Love, which are the nature of the soul, for the first time, become fully accessible. Even the partial dissolution of the shell of personality results in flashes of insight and purposeful stability. From this illumined perspective the words of St Augustine apply: “Love, and do what you will . . . Let the root of love be in you: nothing can spring from it but good.” The challenge is that love, unadulterated by personal need and de-sires, only results from an open connection to the soul. A person who finds the soul’s influence growing within becomes a beneficial force in the world.

When considering the relevance of all this, the question is: relevant to what, or to whom? One thing is clear: in terms of popular discussion or culture the line of thought we followed above rarely comes up. There is the occasional veiled allusion in film, music, or literature, but attempts at a direct consideration are claimed by the various religious approaches, whose separative theologies tend to be more divisive than unifying. In spite of historical examples of the occasional great soul who has influenced social change — the Mahatma Gandhis, Martin Luther Kings, Abraham Lincolns, Nelson Mandelas, and their lesser known co-workers — in the realm of politics, economics, social engineering, business, entertainment, news reporting, agriculture, and so on, the role of the awakened soul is not ignored, but absent from awareness.

So, what is the possible relevance of a work that does not even rise to the level of awareness in those for whom it is intended? Are the Theosophical Movement and the numerous allied efforts that it spawned destined to be for the benefit of a few individuals only? The TS was founded to “form a nucleus of the Universal Brotherhood of Humanity”. Although awakened individuals are required, the work has always centered on the potency of a group effort. In HPB’s words, “Though but a minority of our members are mystically inclined, yet . . . the key to all our successes . . . is in our recognition of the fact of the Higher Self — colorless, cosmopolitan, unsectarian, sexless, unworldly, altruistic — and the doing of our work on that basis.” At the individual level we provide conditions for the Higher Self/soul to impress itself on our world. At the level of the “nucleus” we seed the thought atmosphere with the glowing forms of new potentialities — as yet unrealized possibilities for a unity based on the inherent indivisibility of humanity. These thoughts, exemplified in a few, must ultimately react upon the whole.

[This article was first published in The Theosophist, February 2020, based on a talk given during the 144th International Convention in Varanasi, India]

We have 170 guests and no members online