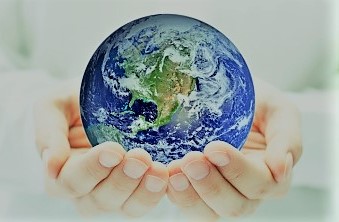 Margaret Mead, an American anthropologist said, “Never doubt that a small group of thoughtful, committed citizens can change the world; indeed, it’s the only thing that ever has.” These words are true of the members of the Theosophical Society.

When we look around our world today and see the suffering, not only of the planet but of those who inhabit our Great Mother, we may be reminded of verses from H.P. Blavatsky’s The Voice of the Silence.

Thou canst not travel on the Path before thou has become that path itself.

Let thy soul lend its ear to every cry of pain like as the lotus bares its heart to drink the morning sun.

Let not the fierce sun dry one tear of pain before thyself hast wiped it from the sufferer’s eye.

But let each burning tear drop on thy heart and there remain, nor ever brush it off, until the pain that caused it is removed.

These tears, O thou of heart most merciful, these are the streams that irrigate the fields of charity immortal. ‘It is on such soil that grows the midnight blossom of Buddha more difficult to find, more rare to view than the flower of the vogay tree. It is the seed of freedom from rebirth. It isolates the Arhat both from strife and lust; it leads him through the fields of being into the peace and bliss known only in the land of silence and non-being. (I, 58-62)

As Blavatsky writes in The Key to Theosophy, “Every true Theosophist is morally bound to sacrifice the personal to the impersonal, his own present good to the future benefit of other people” (p. 282). As members of the Theosophical Society, we are called to serve humanity, to live lives of altruism. Merriam Webster’s online dictionary defines altruism as “unselfish regard for or devotion to the welfare of others.” This life of altruism to which we are called is the Boddhisattva Way. We dedicate ourselves to the welfare of humanity.

What does this mean to us as Theosophists? Does it mean that we devote ourselves to activities that enhance the welfare of others, such as finding shelter for the homeless, feeding those who are hungry, working for social justice causes? The answer to these questions, like the answers to many esoteric questions, is paradoxical. The answer is both yes and no.

In regard to the “yes” answer, as Theosophists and as ethical, compassionate human beings, we are impelled to work for social justice. We must help those who are in need physically. The history of the Theosophical Society is filled with tales of members working to help others..

On the other hand, this type of compassionate aid, while essential, simply addresses the symptoms of suffering. As students of the Ageless Wisdom, we realize that divisiveness, injustice, and cruelty, among others, are symptoms of suffering and not the root cause. As individuals who wish to serve humanity, we must address the cause of suffering. In The Key to Theosophy, Blavatsky writes, “We maintain that all pain and suffering are results of want of Harmony, and that the one terrible and only cause of the disturbance of Harmony is selfishness in some form or another.”

We have been given a glimpse of the Ageless Wisdom, and it tells us that all life is One. It tells us that the separateness we perceive in the world is illusion. What happens to one of us, happens to all of us. Because we are all One, we are the ones who are hungry, homeless, and suffering. We are the ignorance and selfishness that causes the suffering in our world today.

How do we address the selfishness that HPB identifies as the cause of suffering? Once again, as paradoxical as it may seem, to eliminate the suffering of others, to eliminate selfishness, we must work on ourselves and transform ourselves. This spiritual self-transformation is a task to which we are called from the depths of our souls, if we are listening.

When one part of the whole changes, then all of it changes. The change may be so miniscule as to be unrecognizable; however, the shift begins. For example, when one drop of blue dye is added to a glass of water, the water may take on a slightly blue hue for a few seconds then return to a seemingly clear glass of water. The water has changed, however minutely. When more and more drops of blue dye are added, eventually the color of the water begins to change.

It is in this way that we address the cause of suffering. As we change, we change the world. As our consciousness changes, the consciousness of the world changes. This is no small task. It is much easier to feed the hungry than to look at ourselves objectively and make the changes necessary for self-transformation. This self-transformation is the story of our spiritual pilgrimage. It is the daily work and the ultimate goal of walking the Boddhisattva Way.

The daily work of self-transformation requires constant self-observation and awareness of our thoughts, our feelings, our actions. The importance of observing our thoughts is discussed in the Mahatma KH’s first letter to A.O. Hume. The Master writes:

... every thought of man...passes into the inner world and becomes an active entity by associating itself — coalescing, we might term it — with an elemental; that is to say with one of the semi-intelligent forces of the kingdoms. It survives as an active intelligence, a creature of the mind's begetting, for a longer or shorter period proportionate with the original intensity of the [thought] which generated it. Thus, a good thought is perpetuated as an active beneficent power; an evil one as a maleficent demon. And so man is continually peopling his current in space with a world of his own, crowded with the offspring of his fancies, desires, impulses, and passions, ….

The thoughts, and the thousands of feelings and behaviors we have each day--all of which require observation and ultimately purification--provide the foundation for our daily work, work that will slowly move us toward self-transformation. It is difficult work; yet we do it, not for ourselves, but in service to the world. This work often requires discernment regarding our thoughts, feelings, and actions.

Marie Poutz who lived at the Krotona Institute in Ojai, CA and was a much-loved Theosophist in the early to mid-20th century, discussed the question of right action. Ms. Poutz, as she was known, is quoted in Joy Mills book, From Inner to Outer Transformation, discussing her perspective that the difference is not between right action and wrong action but rather between love and not-love.

Ms. Poutz describes Love as actions that awaken the immortal spirit within others. She describes Not-Love as any action that helps to obscure the interior light of another. So, if we look at any action we may take, any thought or feeling we may have, not as right or wrong, but rather as “Is this Love or Not-Love,” we are then acting every moment in recognition of the divinity in all. We begin to act in ways that address the selfishness that HPB identifies as the cause of suffering. We are acting, thinking, feeling from a place of expanded awareness: awareness that we are all one and Love is our responsibility.

Even though we may sometimes wonder if this small group of Theosophists can make a difference in the world, it is clear that we can. When we think, act, and feel in accordance with the underlying unity of all life, then we are changing ourselves. As we change ourselves, we change the world. We are the “small group of thoughtful committed citizens” about which Margaret Mead speaks. We can change the world.

With every tiny movement toward Love, with every act, thought, or feeling of altruism, we change the world.