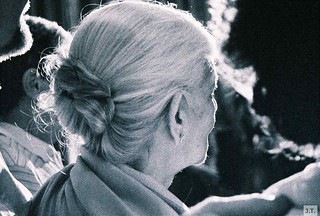 The Source of Spiritual Energy

Could you speak about the purpose of the Esoteric School?

RB: It is a school started by H.P. Blavatsky in 1888. Originally it consisted of a few people who were especially in earnest to learn of her wisdom and follow instructions about the inner life. It was then called the Esoteric Section of the Theosophical Society. Later the name was changed to the Esoteric School of Theosophy. Since that time, the School has grown. Now there are about four thousand members all over the world. From the beginning, its purpose has been to help and encourage its members to live theosophy, live the spiritual life.

Members of the T.S. are not obligated to live in any particular way and each follows the mode of living which pleases him. The Esoteric School is meant for those who are committed to transforming themselves and tread what is called the 'Path'. It is, of course, a school of theosophy. Whatever advice or instructions are given is according to theosophical principles. The word 'esoteric' does not mean that it is a secret society. 'Esoteric' means what is within, within ourselves. So it is for inner unfoldment or development. But its meetings and work are private, confined to its members.

The School, as other schools do, follows the theosophical principle that illumination comes from within. It is not the quantity of instruction and material that a person receives which changes him. Everything depends on his own capacity for assimilation of truths and his unselfishness of motive. So what the E.S. tries to do — success depending on the individual, rather than on the school — is to encourage and assist its members to go deeply into theosophical principles and fruths, and to by to live them wholeheartedly.

The School has certain rules, for instance, abstention from the consumption of meat, alcohol and tobacco. The members must adopt an orderly and responsible way of living. Sometimes the question is asked: Why should any rules be imposed on a person? The School does not 'impose' rules, but it admits to its membership only those who have realized that this is what they want to do.

The question of abstention from flesh-eating is one of sensing the unity of life. Unity implies not sacrificing the life of another creature in order to eat its flesh; this is not necessary for survival, for there are millions of healthy vegetarians. In this context, the question is asked: If killing is objectionable, vegetarians are also killing plants. It is not the same thing, because in the plant kingdom there is no nervous system, no brain, and the reactions of the plant are very different from those of the animal.

The E.S. is a worldwide body meant to create a channel of spiritual influence. Its work in this respect depends on the earnestness with which the members endeavor to tread the path, and aspire to serve the Masters of the Wisdom. Such a channel can be created by those who are united in their aspiration, selfless of motive, and ready to be of service.

The E.S. is open to any person who has been an active member of the T.S. for at least two years and is willing to abide by the rules of the School. Every applicant must know theosophy at least to some extent before entering School. The theosophical principles which should guide his life and inner development must be clear to him. As we already said, he should have already adopted a way of life åat conforms to the rules of the E.S. by being a vegetarian, abstaining from alcohol and tobacco, refraining from an undisciplined sex life, and so on.

In the materially rich countries, where there is no war, hunger and suppression, suffering is usually seen on the emotional level of human existence. This emotional suffering is mostly caused by the male-female relationship. If this is so, would you say something about this enormous cause of suffering?

JA: I think it is in the innate nature of the human being to love and to be loved. Many people are materially privileged but they lack love. Brotherhood and love come from inside oneself. I believe the problem of the man-women relationship is in our heads. There is no superior, no inferior. Man and woman complement each other.

SL: For me there are no external facts in suffering. Suffering is the result of egoism. If you see differences between male and female, you will see differences everywhere.

AP: A friend of mine who suffered on the breakup of a relationship received good advice from a Chinese woman. She told him that he would heal when he became a whole person, when he no longer had the need for the 'other half' he thought he had found.

AL: To lead a simple life we need only to sleep, eat and have some love. Suffering comes because of wanting ever more things, and inventing problems, things to do or to be.

RB: Can we really say that most of the suffering in the rich countries is emotional? There is a tremendous amount of physical suffering, if we take into account drug addicts, battered wives and children, and so forth. Statistics are available about the increasing number of women and children who are assaulted every day. Violence on the streets and broken homes are also among the many symptoms of the misery in rich counties.

The problem of suffering in male-female relationship arises because people like possessions. The love of possession is a great problem. Possessiveness can be seen in different kinds of relationships. A mother can be possessive of her son. In many counties the relationship between a daughter in-law and the mother in-law is almost always a failure; both want to possess. When friends are possessive, tensions and jealousies occur, and there is 'suffering'. Sex relationships intensify ttüs problem. It is a good test, because it puts people in the worst possible position, where they can either pass the test well, or fail badly. In the sex relationship there is a stronger sense of possession, because much physical and psychological pleasure is associated with it. The source of the pleasure, that is, the man or woman from whom pleasure is derived, is identified with the pleasure. So, there is strong attachment. Sex is also a way of forgetting oneself. People give importance to sex, partly because it is the one time when they experience self-forgetfulness. Attachment and possessiveness often grow where there is sex-relationships. That is why jealousy becomes intense, and the so-called suffering from separation is more keenly felt in these relationships.

A holy man in India said that people do not exist for us to possess; they exist only for us to serve. People are attached to families, but the relationships are temporary. In this incarnation someone is a son, a father, or mother; in the next there will be a different group. We are brought into relationship with a particular group in order to learn responsibility, and to serve in the best possible manner, and also to help them unfold their own potentiality, not in order to possess them, to hold them, to make act according to our desires. This is of every relationship, whether in a family, with a close friend, or with husband or wife. Only in the latter case it is more difficult to be balanced, for the reasons given.

Suffering ceases completely when attachment and possessiveness are absent. Even separation will not matter when there is no attachment. If you really love a person, when the person dies, love does not die, nor the joy of love. Distance does not matter, if you really love a person. You will allow him freedom to go away. The suffering is not caused by the other person. Every person you are linked with gives you the opportunity to learn to be non-possessive and to learn what real love is.

When considering this, begin with the family. Most people feel attached to the family, even more to a husband or wife. Begin to be unattached but loving. Attachment and love, in the real sense, cannot co-exist. Life is for understanding what is love that does not hold on.

We have 166 guests and no members online