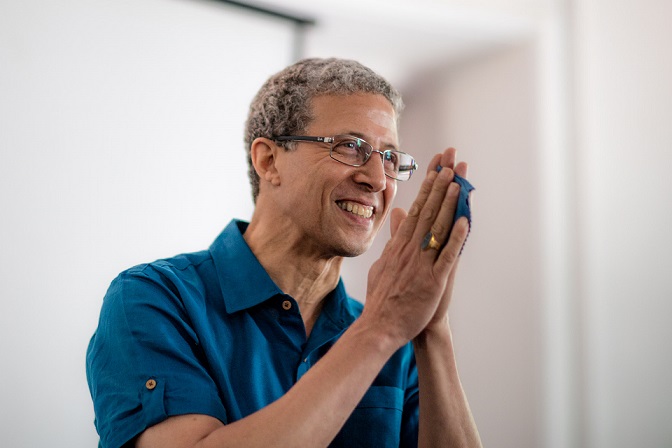 There are two phrases, one a prayer, and the other a statement with which members of the Theosophical Society (TS) are familiar. The prayer is known as the Pavamâna Mantra: “From the unreal lead me to the Real. From darkness lead me to Light. From death lead me to Immortality.” For those TS members who were not raised in India, often the first time this prayer was encountered was on the page after the dedication of the little book, At the Feet of the Master by J. Krishnamurti. It is a prayer that predates Jesus the Christ and the Buddha, being 2,600 to 3,000 years old.

The second phrase is the motto of the TS itself: satyân nâsti paro dharma. Variously translated it says: “There is no dharma (or doctrine) higher than sat, (Truth).” There is no law, no study, no sacrifice, no religion, no ritual, nothing that is higher than sat — Reality. The preferred translation adopted for the TS is: “There is no religion higher than Truth.” The focus has always been to point ourselves in the direction of Truth, and to try to understand whatever our capacity permits.

In Isis Unveiled H. P. Blavatsky (HPB) wrote about our desire to know the Truth. She quoted Edward William Cox, then President of the London Psychological Society, saying: “There is no more fatal fallacy that we can embrace than that truth will prevail by its own force, that it has only to be seen to be embraced.” She continues the quote: “In fact the desire for the actual truth exists in very few minds, and the capacity to discern it in fewer still.” Yet, irresistibly we continue to reach for that which is necessarily beyond our grasp.

This unrelenting search for truth is perhaps one of the reasons why in the book, At the Feet of the Master, the first of four qualifications for the spiritual path is discrimination, or discernment. The initial focus being the discrimination between the unreal and the real, and between right and wrong. At the point in our unfoldment that we find the attempt to cultivate discrimination of some importance, a sense of right and wrong is already fairly well-rooted in us.

The language in which Krishnamurti expressed these four qualifications was the language of a fourteen-year-old — very direct, innocent, and untainted. However, the thoughts expressed in At the Feet of the Master were not the product of a mature and fully developed consciousness. Krishnamurti was reciting the words given to him while his body slept and he was being tutored by his Master. It was a repetition of the things that had been told to him during his youthful training at the feet of his Master.

Truth, in the sense of ultimate reality, is not something that we perceive. Although Truth is without limitations, our capacity to perceive it is profoundly limited. So we end up seeking “truths”, limited expressions of the greater reality, in our attempt to discover Truth. There seems to be no way around it.

If we look back on our own lives, we find that our perception of what is real and true has altered over time. There is the expression that “when I was a child I thought as a child”, but as our consciousness unfolds “we put away childish things”. Our perception and capacity to grasp what is true alters over time.

I can remember when I was first asked to give a theosophical lecture. As would be expected, I prepared myself: I researched, went to the proper books on the subject, had note-cards on which I wrote my thoughts — the things that I would share with others. Then the time came to stand up in front of people and speak. I shared what I had written down, and it was apparently sufficiently well received that I spoke on the same topic in another place at another time. As I recall, the subject was Initiation — a very big subject. I could recite the different stages of Initiation, I could give the Sanskrit names, I related it to world scripture, and so on. All of it was true. However, I did not have the experience to speak with any degree of inner authority. It was based on the authority of those I believed had a deeper experience and understanding.

If I were asked to give that talk today, I could not do it — not because the facts would be different, but because it would no longer be true for me. The great mystic, Kabir, said that if we have not lived a thing, it is not true for us. No matter how well it is researched, until it is something that we have incorporated into our being, it falls short of truth.

Truth is very difficult to understand; truths are perhaps more within our grasp. Our continuing approach to Truth will necessarily be an effort of refinement that we engage in from moment to moment.

We have 331 guests and no members online