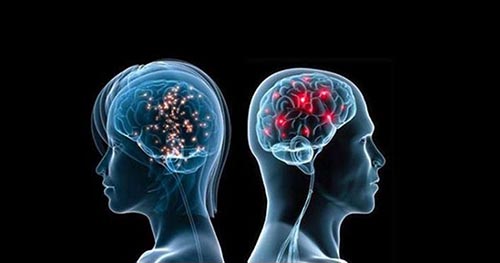 [This article appeared in the April 2019 issue of The Theosophical Movement. For more articles published in this excellent magazine follow this link: http://www.ultindia.org/previous_issues.html ]

Male and female differ in their behavior and abilities. For instance, it is believed that men are good at map-reading, but they are good at doing only one task at a time. Females, on the other hand, are good at multi-tasking, and are more intuitive and empathetic than men, but are poor at logical thinking. But it appears that men and women are distinguished also by their brains, so that women are not found suitable for certain kind of works. It is also believed that the differences between women and men in ability, behavior, temperament and even lifestyle choices are on the basis of genes, genitals and gonads. But such assumptions are questionable, because our brains are plastic, capable of being moulded in different ways. Early explanation of brain differences often centred on size and weight of the brain. Women’s brains, on average, being ten per cent or about 140 grams lighter than men’s, women were considered inferior. Later, the differences were based on specific structures of the brain. In the early 1980s, came the idea that the corpus callosum, which connects two halves of the brain being larger in women than in men, enabled her to access both the sides of the brain, almost simultaneously, and to this was attributed greater emotional awareness and the multitasking abilities in women.

“There are good reasons to think that such studies are chasing shadows,” writes Gina Rippon, a cognitive neuroscientist at the University of Aston in Birmingham, United Kingdom. She points out that there is no evidence to suggest that bigger brains are better brains, because, for instance, human beings are cognitively superior to sperm whales and African elephants, that have far larger brains. Moreover, now it is accepted that our brains are the product of the lives we have lived, the experiences we have had, and our education, occupations, sports and hobbies. Any regular activity, be it playing a certain game, or learning juggling or origami, can change our brains. Thus, men or women’s ability for a particular activity will be determined based on which of them were more engaged in that activity. We need to challenge assumptions behind the hunt for differences between male and female brains, writes Rippon.

In fact, there are evidences that suggest that men and women are more similar than they are different. Moreover, in a 2015 study by Daphne Joel and her colleagues, at Tel Aviv University in Israel, they examined more than 100 brain structures in over 1400 brain scans and found that each brain had a mixture of what may be called “male” and “female” characteristics, and hence it was impossible to divide them neatly into two sets of “female typical” or “male typical.” Thus, we may say that “every person’s brain is unique. The value comes from knowing where these individual differences come from and what they might mean for the brain’s owners,” writes Gina Rippon. (New Scientist, March 2, 2019)

Theosophy says that man is a soul. Mr. Judge remarks in Letters That Have Helped Me that we make a lot of fuss about the male and female sex. Both, men and women are essentially divine and hence, at the level of Spirit, there is no difference between a man and a woman. We say that the soul has no sex. However, in psychic consciousness there are still distinctions between man and woman. Thus, for instance, Mr. Judge says that the female character is, per se, concrete, i.e., its tendency in thought, speech, and act is toward the concrete, while the male character seems to be per se abstract, and this was believed by the Kabbalists and the ancients of all nations. Perhaps by concrete thought he means rigidity, thinking in grooves, having fixed views, and also lesser ability to dwell on the abstract. Concrete may also mean precise and definite, practical and realistic as against theoretical and idealistic.

Also, the general tendency of women is to keep things as they are and not to have change. Woman, with a few exceptions, has never been the pioneer in great reforms. They keep things as they are, until the men have brought about the great change. As a result, women generally tend to support established religion. There could be exceptions in both the sexes, but that does not invalidate the claim, and we are easily able to recognize a woman who has man’s character or a man who has a woman’s character, writes Mr. Judge. He observes that the essentially female character is totally different from the essentially male character. He explains that the soul or the Ego evolves, through many lives, male or female traits or character and then depending upon predominance of that tendency it is attracted to a male or female body. Each human being prepares to move over from a male body to the female body, and vice versa in some subsequent life for gaining experience. All of us must have lived in the past incarnations many times in male as well as in female bodies by now. There are lessons to be learnt in both male and female bodies, and through masculine and feminine natures.

Brain is only an instrument of the mind or soul, which facilitates expression of a particular ability or skill brought by the Ego from the previous births. H.P.B. says that any new kind of mental effort carves out new “brain paths.”