What Theosophy Is ... And Where It Is Going 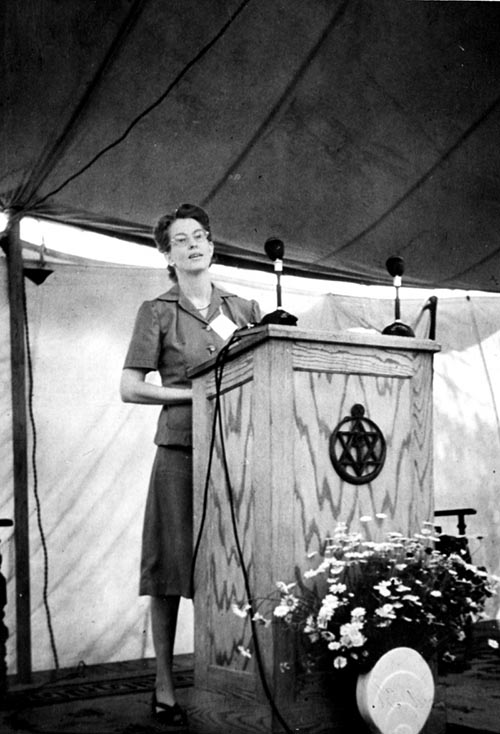 Joy speaking at a summer convention, probably around 1954

As is well known to all students, the word “Theosophy” has never been defined in any official document of the Theosophical Society, but this does not mean that Theosophy itself is simply an amorphous “something” nor is it a “catch-all” term for anything one wishes to believe. Rather, then, than saying what Theosophy IS, I prefer to suggest certain distinguishing characteristics of the term.

First, Theosophy as a word which can be explored either in terms of its roots or in terms of whatever has usually been understood as its content. Second, as a “doctrine” or “teaching,” a philosophy or a metaphysic embracing a specific worldview. And third, as a way of life, a mode of being in the world. Each of these characteristics may be examined separately or seen as interdependent, one leading to and including the others.

As a word, then, Theosophy is usually defined in terms of its Greek origins, THEOS and SOPHIA. Theos we consider as the basis for such words as god, the gods, divine, sacred, but when examined more deeply, we may note that its verbal root has the essential meaning of that which grows or expands from within, a creative energy or force. Sophia as wisdom or discriminative intelligence is then inherent in the creative process, and one may recall the Scriptural text that “By wisdom God created all things,” which by implication tells us that not only did intelligence or wisdom come first but that it inheres in all that exists in a manifested universe; hence all things are sacred. This has always been, for me, the fundamental premise of Theosophy: the universe and all that it contains is not only one substance, one “thing,” however diverse may be the forms through which that one-ness exhibits itself, but in its manifoldness is everywhere sacred, participating in the divine.

As a doctrine or teaching, Theosophy comprises fundamental principles, among which may be numbered unity, polarity, cyclicity, lawfulness, etc. A full detailing of Theosophy as teaching would take us far beyond the bounds of this brief exposition and, of course, has been the subject matter of numerous books from ancient times to the present, with modern Theosophy dating more explicitly from the time of the publishing of the works of H.P. Blavatsky.

Especially significant, I believe, is the recognition that Theosophy, to be truly meaningful as a doctrine, must be exhibited in one's life. It is, essentially, a way of life, which means a way of being, of acting, of thinking, of feeling, in the world. Theosophy, from such a point of view, is not so much a noun as a verb. It is not so much a teaching to be learned as a process to be experienced, just as in the mystery schools of old, the neophyte was led to the experience of an inner reality that could never be fully explicated in any language, but which by its very nature transformed the initiate, a new birth revealing a new being. This is the age-old process known as theurgy, for we are called on to perform a work of the gods, by so transforming ourselves that we transform the world.

And it is because of this third characteristic of Theosophy that we can perceive where it may be going. First, Theosophy as a wisdom reveals itself in our being as we grow into it; until we do grow into it, transforming ourselves in the process, the principles and concepts remain fragmentary. We must accept, in all humility, that no written text or scripture, however profound, could ever contain the whole of a wisdom which is as vast as the universe itself. As a wise sage once said, “You must not only learn the truth, you must suffer it.” And to suffer the truth, to bear it, is to live it in such a way that even as we discover deeper and deeper aspects of truth, our lives are transformed. So where is Theosophy going? It must pierce the very essence of our being until we become the carriers, the embodiment of that wisdom, becoming in some mysterious and perhaps limited manner co-creators with the Ultimate One, with the responsibility for aiding the upward ascent of all life. If we are true to the inherent meaning of Theosophy, as a word, as a teaching, as a way of life, we – like those great ones who have gone before us – may become by our presence a blessing on the world, we may become authentic Theosophists.

We have 282 guests and no members online