Voice of the Heart 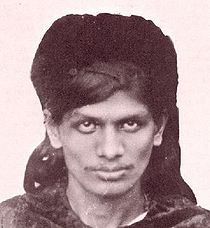 Last night just as I was about to go to rest, the voice of Kunala called me from outside and there I went at once. Looking steadily at me he said: “we want to see you,” and as he spoke he gradually changed, or disappeared, or was absorbed, into the form of another man with awe-inspiring face and eyes, whose form apparently rose up from the material of Kunala's body. At the same moment two others stood there also, dressed in the Tibetan costume; and one of them went into my room from which I had emerged. After saluting them reverently, and not knowing their object, I said to the greatest, “Have you any orders to give?”

“If there are any they will be told to you without being asked,” he replied, “stand still where you are.”

Then he began to look at me fixedly. . . I cannot tell now what time passed between that and what I am now to put down here. But I saw I was in a peculiar place. It was the upper end of - at the foot of the - range. Here was a place where there were only two houses just opposite to each other, and no other sign of habitation; from one of these came out the old Fakir I saw at the Durga festival, but how changed, and yet the same: then so old, so repulsive; now so young, so glorious, so beautiful. He smiled upon me benignly and said:

“Never expect to see anyone, but always be ready to answer if they speak to you; it is not wise to peer outside of yourself for the great followers of Vasudeva: look rather within.”

The very words of the poor Fakir! He then directed me to follow him. After going a short distance, of about half a mile or so, we came to a natural subterranean passage...The path is very dangerous; the River flows underneath in all the fury of pent up waters, and a natural causeway exists upon which you may pass; only one person at a time can go there and one false step seals the fate of the traveler. Besides this causeway, there are several valleys to be crossed. After walking a considerable distance through this subterranean passage we came into an open plain... There stands a large massive building thousands of years old. In front of it is a huge Egyptian Tau. The building rests on seven big pillars each in the form of a pyramid. The entrance gate has a large triangular arch, and inside are various apartments. The building is so large that I think it can easily contain twenty thousand people. Some of the rooms were shown to me.

This must be the central place for all those... [who] go for initiation and stay the requisite period. Then we entered the great hall with my guide in front. He was youthful in form but in his eyes was the glance of ages... The grandeur and serenity of this place strikes the heart with awe. In the centre was what we would call an altar, but it must only be the place where focuses all the power, the intention, the knowledge and the influence of the assembly. For the seat, or place, or throne occupied by the chief... has around it an indescribable glory, consisting of an effulgence which seemed to radiate from the one who occupied it. The surroundings of the throne were not gorgeous, nor was the spot itself in any way decorated – all the added magnificence was due altogether to the aura which emanated from Him sitting there. And over his head I thought I saw as I stood there, three golden triangles in the air above. Yes, they were there and seemed to glow with an unearthly brilliance that betokened their inspired origin. But neither they nor the light pervading the place, were produced by any mechanical means. As I looked about me I saw that others had a triangle, some two, and all with that peculiar brilliant light. . .

14th day of the new moon. The events of the night in the hall of initiation gave me much concern. Was it a dream? Am I self-deluded? Can it be that I imagined all this? Such were the unworthy questions which flew behind each other across my mind for days after. Kunala does not refer to the subject and I cannot put the question. Nor will I. I am determined, that, come what will, the solution must be reached by me, or given me voluntarily. Of what use to me will all the teachings and all the symbols be, if I cannot rise to that plane of penetrating knowledge, by which I shall myself, by myself, be able to solve this riddle, and know to discriminate the true from the false and the illusory? If I am unable to cut asunder these questioning doubts, these bonds of ignorance, it is proof that not yet have I risen to the plane situated above these doubts . . . Last night after all day chasing through my mental sky, these swift destroyers of stability – mental birds of passage – I lay down upon the bed, and as I did so, into my hearing fell these words:

“Anxiety is the foe of knowledge; like unto a veil it falls down before the soul’s eye; entertain it, and the veil only thicker grows; cast it out, and the sun of truth may dissipate the cloudy veil.”

Admitting that truth, I determined to prohibit all anxiety. Well I knew that the prohibition issued from the depths of my heart, for that was master's voice, and confidence in his wisdom, the self-commanding nature of the words themselves, compelled me to complete reliance on the instruction. No sooner was the resolution formed, than down upon my face fell something which I seized at once in my hand. Lighting a lamp, before me was a note in the well-known writing. Opening it, I read:

“Nilakant. It was no dream. All was real, and more, that by your waking consciousness could not be retained, happened there. Reflect upon it all as reality, and from the slightest circumstance draw whatever lesson, whatever amount of knowledge you can. Never forget that your spiritual progress goes on quite often to yourself unknown. Two out of many hindrances to memory are anxiety and selfishness. Anxiety is a barrier constructed out of harsh and bitter materials. Selfishness is a fiery darkness that will burn up the memory’s matrix. Bring then, to bear upon this other memory of yours, the peaceful stillness of contentment and the vivifying rain of benevolence.”

From: A Hindu Chela’s Diary