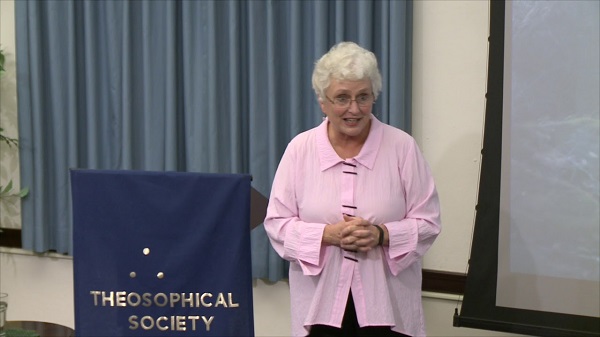 The author “in action” at Olcott

The first object of the Theosophical Society is “To form a nucleus of the universal brotherhood of humanity without distinction of race, creed, sex, caste, or color.” This object provides one of the most important tenets in the theosophical teachings and is one of the reasons for the founding of the Theosophical Society. In Letter #12 (chronological) of The Mahatma Letters to AP Sinnett, the Mahatma KH writes “The Chiefs want a ‘Brotherhood of Humanity,’ a real Universal Fraternity started; an institution which would make itself known throughout the world and arrest the attention of the highest minds.” Furthermore, the Mahatma KH writes in Letter #5 (chronological) “The term ‘Universal Brotherhood’ is no idle phrase . . . It is the only secure foundation for universal morality. If it be a dream, it is at least a noble one for mankind: and it is the aspiration of the true adept.”

It is difficult, then, to underestimate the importance of unity, of a sense of brotherhood and sisterhood within the Theosophical Society, especially between its members. However, it is not uncommon to find members of the TS who have difficulty getting along with one another. Why is there dissension between members? Why do theosophical groups, at every level, experience discord and friction at times? One may wonder, if we can’t get along with each other, then how will we ever form a nucleus of the brotherhood/sisterhood of humanity? If the idea of unity is so important, why can’t we work together in peace and harmony?

Ed Abdill writes,
The Theosophical Society was meant to be an organization of people from every culture who have some sense of the underlying unity of all. It was meant to be an organization of people who work together to help others realize their underlying unity with humanity as a whole. Far as we may be from it, that is our ultimate goal....From an awareness of underlying unity comes an altruistic way of life that is compassionate, wise, and practical. That is the sacred mission of the Theosophical Society, made clear by KH when he wrote: “The chief object of the T. S. is not so much to gratify individual aspirations as to serve our fellow men” (Letter 2, Barker). (1)

As we tread the spiritual path, much of the literature encourages us to participate in “right action” in order to fulfil this sacred mission. While participation in right action sounds simplistic, discerning the difference between right action and other action often is not. Joy Mills, in her book From Inner to Outer Transformation, discusses this very issue. She talks about Marie Poutz, long-time dedicated member who lived and worked at Krotona Institute. Ms. Poutz was loved by all who knew her: she was an amazing woman and a strong theosophical student. Ms. Poutz, according to Joy Mills, shared the idea that, for her, discernment was not between right action and wrong action, but rather between actions that were based on love and actions that were based on not-love. She described Love as actions that awaken the immortal spirit within others. She described Not-Love as any action that helps to obscure the interior light of another. So, if we look at any action we may take, not as right or wrong, but rather as “Is this action Love or Not-Love,” we are then acting every moment in recognition of the divinity in all. It is this unitive divinity which lies at the basis of the first object of the Theosophical Society.

Using Ms. Poutz’s manner of determining Love vs Not-Love seems very helpful, especially in relation to dissension and arguments within our various theosophical groups, We can use it, in conjunction with other techniques such as self-observation and perceiving situations from a more universal perspective, as a guidepost for spiritual growth, especially when we encounter difficulties within our groups.

Ed Abdill quotes former President of the Theosophical Society in America, Dora Kunz, who addressed this issue:
There are thousands of members of the Theosophical Society, but there are very few Theosophists. It is very easy to sign a piece of paper and say you want to join the Theosophical Society and that you believe in brotherhood, but brotherhood is something we should live instead of talking about it. The Theosophical Society is the testing ground for brotherhood. It is the place to let ourselves grow, to let ourselves understand that we are not to be dogmatic, to let ourselves learn to get along with one another whether we like one another or not. You must be willing to have differences of opinion. You must be willing to stand the acid test, even if you are called names. It is you who are being tested. If you walk out because one individual says something nasty to you, you are failing the test of brotherhood. . . . If you could think of the personalities that you meet as the acid test of your own character, of your own Theosophy, you would get a different point of view. When something comes up, ask yourself how you will take it, and ask yourself what it is about you that needs to be changed. (1)

As indicated by Dora’s comments, one of the primary techniques we are encouraged to implement in the spiritual quest is self-observation. In order to make any changes, especially on the spiritual path, we must first be aware of what needs to be changed. Objectively observing ourselves, primarily our thoughts, our words, and our actions and then analyzing them through provocative self-questioning provides us with insight for change. Self-observation is one of the most important ways in which we can determine if we are choosing Love or Not-Love. We must observe our own role in group dissension in order to accrue valuable awareness. It is certainly not easy to step away and assess any situation in which we are involved without judgment, without taking sides. However objectivity is essential in understanding our own role in the situation. We might ask ourselves the questions which Dora suggested as well as some of the following, and then contemplating the answers to these questions: Have I chosen a side in this situation, no matter how right I believe I am? Have I said or done anything to maintain the dissension, such as stir up discord with others? Have I sat quietly on the side and failed to share thoughts that might help others to resolve the situation. How do I perceive others in the group? Am I making judgments about others?

As we contemplate the answers to these and other questions, we may find that we have indeed worked toward dissension rather than resolution; that is, we are involved in Not Love rather than Love. It is at this point that we must begin to make decisions about how we will change our thoughts, our words, and our actions so that we are working on the side of love, actions that awaken the immortal spirit of others as opposed to actions that obscure the light of others.

It is very helpful to look at the situation from a more universal perspective as well. Many of the things about which we argue are essentially unimportant. While they may seem to be of paramount importance at this moment, how important will the issue be in 50 years, 100 years? We might ask ourselves, In 100 years, when someone looks back at group notes, minutes, letters or emails regarding the group, will the situation still be important then as it seems today? What is the most important thing in this lifetime? What are we trying to learn and to implement in the world? When we get to the end of our lives, will we look back and say, I’m so glad I won the argument with others in my TS group. or are we more likely to say, I tried very hard to resolve difficult situations with love and to do my best in helping the light of others to shine.

Furthermore, from the Ageless Wisdom, we know that each of us is an emanation of the One Reality. It seems reasonable to ask ourselves: When I interact with others would I interact with the Divine in the same manner? Am I interacting with Love or with Not-Love? Am I trying to manipulate this situation so that “my side” wins the argument? Are my thoughts about others accurate and true, or are they colored by my thoughts and feelings?

Clearly, using self-observation and self-analysis while determining if we are acting with Love or Not Love can provide wonderful insight as we walk the spiritual path. Not only will these guideposts potentially alleviate some of the dissension found within various theosophical groups, it will propel us forward on our own spiritual journey. As Ed Abdill writes, ‘If we aspire to a realization of the One, then we can change ourselves in such a way that we can get insight. We can lay aside our own preconceived ideas about people and see beyond appearances to the divine life that is deep within them as it is deep within us. Simply joining the Theosophical Society will not bring this about. We must have an iron, never-failing determination to bring it about in ourselves.” (1)

In J. Krishnamurti’s classic theosophical book, At the Feet of the Master, those engaged in the spiritual quest are encouraged to ask themselves what the Holy Ones might do in any given situation. Echoing this statement is a more modern Christian version: “What would Jesus do?” Regardless of the nomenclature, the most important component of the statement involves the concept that if we are truly on a spiritual quest, we have the opportunity to test our words, thoughts, and actions in terms of Love and Not Love. We have the opportunity, or perhaps the obligation, to interact with our brothers and sisters with Love so that we are facilitating the spiritual growth of all. In this way, we will be alleviating dissension in our groups and increasing unity in our lives and in the world.

It seems useful to end this discussion by a quote from the Mahatma KH. “It is he alone who has the love of humanity at heart, who is capable of grasping thoroughly the idea of a regenerating practical Brotherhood who is entitled to the possession of our secrets. He alone . . . will never misuse his powers, as there will be no fear that he should turn them to selfish ends. A man who places not the good of mankind above his own good is not worthy of becoming our chela [student] he is not worthy of becoming higher in knowledge than his neighbor.” (Letter #33, Chronological)