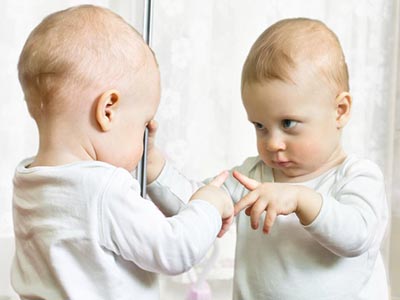 [This article appeared in the October 2018 issue of The Theosophical Movement. For more articles published in this excellent magazine follow this link: http://www.ultindia.org/previous_issues.html ]

When you look at your reflection in the mirror, you are aware, who it is that is looking back at you. The sense of self is unmistakable. Self-awareness is one of the biggest mysteries of the mind. How did it arise, and what is it for? Besides human beings, there are a few animals, which recognize themselves in the mirror. Self-awareness may have evolved in the brightest animals with the biggest brains. If so, then it represents peak of mental complexity – the highest form of consciousness. However, though the ability to recognize oneself in a mirror is generally taken to be an indicator of self-awareness, that idea is being challenged. For instance, developmental psychologists argue that it does not necessarily reveal an awareness of self that extends beyond the here and now.

“Many psychologists and anthropologists hold that there is a hierarchy of consciousness that corresponds with increasing brain complexity.” Animals with simple nervous system and involved in raw sensory experiences, are considered to be at the base of the hierarchy. Few minds are sophisticated enough to experience the world differently – through an introspective lens, and even these may have a limited sense of self. “Only at the peak of mental complexity do we find minds able to construct a lifelong narrative of experiences centred around an abstract concept of ‘self’ – these are the elite. This difference in the size and complexity of the brains must have been based on the differing evolutionary demands that the animal has to meet in order to survive….There is one particular demand that seems to have led to the evolution of complex brains and could also have created the conditions for a sense of self to arise. That challenge is dealing with minds of others – be they prey, competitors or other members of your social group.” To achieve this, the brain needed to evolve from being simply a thing that experiences sensation to becoming their observer.

Self-awareness may be an apparently complex phenomenon that emerges from the brain. Mind can glean the echo of billions of neurons responding to each other with electrical signals. The signals flow along different set of connections, but some paths are well trodden. In humans, the predominant connections seem to be those used to contemplate the minds of others – the same connections used to contemplate ourselves. What emerges from this is a pattern that seems constant. To you, that is your sense of self. Thus, our brain conjures up the sense of self. Self-awareness is not the pinnacle of consciousness, it is just an accidental by-product of evolution, and a figment of our minds, writes Sofia Deleniv, a doctoral student at the University of Oxford. (New Scientist, September 8, 2018)

The sense of “self” may just be an illusion created by 100 billion neurons at work, wrote Johnston professor of Psychology at Harvard, Steven Pinker. Neuroscientists locate our consciousness in the brain and not in the soul, saying that sensations, thoughts, joy and pain are the result of physiological activities in the brain tissues. Consciousness can be manipulated by physical means. We think, feel and see differently when the brain is affected by chemicals, such as caffeine, alcohol or Prozac. Thus, science seems to locate the sense of “self,” and the sense of “I” in the brain – making “mind” redundant.

Brain, says Theosophy, is an instrument of the mind. What is it that distinguishes a man from an animal? It is self-consciousness and the power to think and choose. These arise from the mind. It was only when man had developed a brain of much better and deeper capacity than that of any other animal, that he was given the light of mind by Divine Beings – Manasaputras. As a result, man was endowed with self-consciousness and with the power to think and choose. Can an improved quality of brain endow an animal with humanlike consciousness and cognitive capacities, such as, the ability to feel pleasure and pain (like human beings), rationality and richness of relationships? It is mind that affects the quality of the brain and not vice versa. “The depth and variety of brain convolutions in man are caused by the presence of Manas, and are not the cause of mind,” writes Mr. Judge.

Though animals have mind, it is still in the latent state. It is only in the human kingdom that the monad (Atma-Buddhi) is individualized, and as a result man is endowed with self-consciousness and apperception, whereas in the animal kingdom we speak of “monadic essence.” However, in animals, this process of individualization of monad is gradual, and in the higher animals it almost comes to the point of being individualized. Hence, some of the animals seem to exhibit self-reflective consciousness.