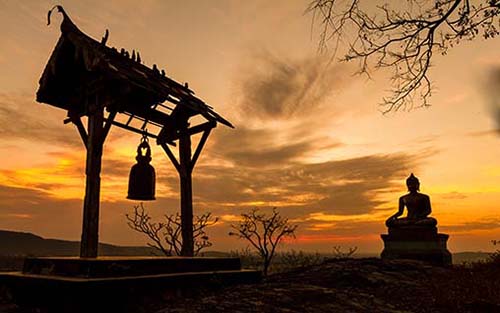 The Voice of the Silence (VofS), as passed on by H. P. Blavatsky (HPB), contains chosen fragments from The Book of the Golden Precepts and is intended for the daily use of lanoos (disciples). This Book of the Golden Precepts forms part of the same series as that from which the “Stanzas” of the Book of Dzyan were taken, on which The Secret Doctrine is based. VofS is “Dedicated to the Few”, according to HPB, originally meant for the few real mystics in the Theosophical Society.

Instructions are given in three Fragments: “The Voice of the Silence”, “The Two Paths” and “The Seven Portals”. The title of this article is quoted from the third Fragment, “The Seven Portals”, and has reference to the previous Fragment where the voice of the candidate is asking: “Shalt not thou, Master, of thine own Mercy, reveal the Doctrine of the Heart? Shalt thou refuse to lead thy servants unto the Path of Liberation?” (102)

And then the pupil is informed by the Teacher about the two Paths to Nirvâna.*

Although there is One Path, he says, at the end it is twofold, its stages are marked by four [fourfold Dhyâna*] and seven Portals. One is the Open path, called the Path of Liberation with immediate bliss; the other is the Secret path, the Path of Renunciation with bliss deferred, the “Path of Woe”. Both are the reward of “merit”. (179) The choice is up to the disciple: “Thou canst choose either.” (194)

And the disciple, now called “Srâvaka”,* tells his spiritual Teacher in Fragment III that his choice is made: “I thirst for Wisdom. Now hast thou rent the veil before the Secret Path and taught the greater yâna.* Thy servant here is ready for thy guidance.” (196)

The Teacher then points out: “Prepare thyself, for thou wilt have to travel on alone. The Teacher can but point the way.” (197)

The Srâvaka in Fragment III has chosen to tread the secret path through the Pâramitâs,* the golden keys to the Portals of which the last and seventh is Prajñâ,* the key to which makes of a human a Bodhisattva. And the Teacher tells him:

“Before thou canst approach the last, O weaver of thy freedom, [emphasis added to reference the title] thou hast to master these Pâramitâs of perfection – the virtues transcendental six and ten in number – along the weary Path.” (215)

The Portals are noble gates of virtue leading to Bodhi* and Prajñâ, the seventh step of Wisdom. To get there, the Srâvaka has “to fight [his] way through . . . seven strongholds held by cruel and crafty powers – passions incarnate.” (200) He is being told that the way is hard and thorny and the Portals ever narrowing. (205)

When we choose, like the Srâvaka, to “walk” this secret Path, or better to “become” this Path as it in fact is, we have set our feet on the Bodhisattvic Path. A Bodhisattva is on the Arya Path, the path of “the holy”, which has four stages and can only be entered through great spiritual development and “growth in holiness”; these stages are called the “four fruits”. The Arhat (Arhan) is one who entered the best and highest path and is thus emancipated from rebirths. He is the “worthy one, deserving divine honours”, the fourth “fruit”, according to the Theosophical Glossary.

This is interesting because we find in The Secret Doctrine I, Stanza VI, ªloka 7 what – in my view – the mission is for humanity on earth, here addressed to the Lanoo:

It is very well possible that this relates to the “upward” movement towards a more spiritual level of consciousness on humanity’s evolutionary journey; to my understanding an unavoidable challenge for mankind. And we are made aware that “no Arhan . . . becomes one in that birth when for the first the soul begins to long for final liberation”. (173)

In the commentary on the quoted Stanza it is stated that three further higher grades have to be conquered by the Arhat who would reach the apex of the ladder of Arhatship.

The Secret Path, this Boddhisattva Path, implies as purpose the “Secret life”, a life as a Nirmânakâya. Such a life re-quires the weaving of a new vesture:

“Out of the furnace of man’s life and its black smoke, winged flames arise, flames purified, that soaring onward, ’neath the Karmic eye, weave in the end the fabric glorified of the three vestures of the Path.” (140)

These three vestures are buddhic bodies or forms and named: Nirmânakâya, Sambhogakâya and Dharmakâya. From these vestures the Nirmânakâya is the glorified one; this vesture is the out-come on the Path of Renunciation. The Bodhisattva develops this vesture in himself as he proceeds on the Path. When he dies, he remains in that glorious body he has woven for himself, invisible to man-kind, to be part of the guardian wall to watch over and protect mankind, giving up nirvanic bliss, as stated in VofS, Glossary 3. This is in contrast with the Sambhogakâya and the Dharmakâya, who choose to leave earthly concerns and every possible relation with this earth behind.

The above quotation shows that the “thirst for Wisdom” requires purification, a purification in the furnace of life whereby gradually all impurities in our nature, causing the black smoke, are being burnt up in the fire of wisdom while the arising winged flames, purified flames, are weaving a new vesture.

In this respect the Pâramitâs could be seen as the threads for the fabric, the weaving material.

All the portals can only be opened by the golden keys when the necessary transcendental aspect of the required virtue has been acquired. This means refining the virtues to the most exquisite level by constant and thorough investigation: reforming one’s Self by meditation and knowledge.

It is obvious that this is not easy and therefore guidance for “weaving thy freedom” is given by the Teacher in many ways. Some of the guidance is easy to understand and some give rise to pondering. For example:

“Before thou canst approach the foremost gate thou hast to learn to part thy body from thy mind, to dissipate the shadow, and to live in the eternal. . . .” (217)

Is it possible to part thy body from thy mind? If so, how do we do that?

One of the first instructions – in Fragment I – might be of help: “The mind is the great slayer of the Real. Let the disciple slay the slayer”, preceded by: “Having be-come indifferent to objects of perception, the pupil must seek out the râjâh (dominator, ruler) of the senses, the thought-producer, he who awakes illusion.”

We are mostly prey of the senses, thoughts, emotions, memories and impulses from the personality evoked through the consciousness stored in the cells of the organs of the body. The cells in our body are interconnected to our mind and there-fore to the state of our mind. When our mind is focused on the personal, material side of life, the cells will be in accordance with it thereby blocking impressions from the Heart, the most spiritual organ of the body, the abode of the “Wisdom from above”. When we are able to become aware of these blockages, having sought out the râjâh of the senses, having made the “flesh . . . passive, head cool, the soul as firm and pure as flaming diamond” (81), we liberate ourselves from the bodily influences of the personality – dissipate the shadow, as the personality is often referred to – giving way to the whispers of the Heart.

In this process of “parting the body from the mind” and becoming more receptive to the “Heart’s Wisdom” the cells will become more, and ultimately be, predominantly of a spiritual nature, thus making the body accordingly more and more etheric: spiritualized. Then we can say: the disciple is, through the impulses from the “Heart”, slaying the illusory nature of the mind: slaying the slayer of the Real.

With regard to this, the instructions in The Voice of the Silence are rather stern:

“Strive with thy thoughts unclean before they overpower thee. Use them as they will thee, for if thou sparest them and they take root and grow, know well, these thoughts will overpower and kill thee.” (54)

“Ere thy Soul’s mind can understand, the bud of the personality must be crushed out, the worm of sense destroyed past resurrection.” (57)

“Kill in thyself all memory of past experiences. Look not behind or thou art lost.” (75)

Behind all this there is one thing of major importance which should not be overlooked and never be forgotten: the “ground” on which we “walk”, the motive, the drive from within. This ground must be right and strong and the foundation of all our efforts; otherwise we will not be able to meet fearlessly, life after life, the trials and pitfalls on our path.

Taking the spiritual Path for the sake of ourselves, would be a selfish act. Therefore the Teacher points out to the beginner that he must know that:

“the Open Path [is] the way to selfish bliss, shunned by the Bodhisattvas of the Secret Heart, the Buddhas of Compassion. To live to benefit mankind is the first step. To practise the six glorious virtues is the second. To don Nirmânakâya’s humble robe is to forego eternal bliss for self, to help on man’s salvation. To reach Nirvâna’s bliss, but to renounce it, is the supreme, the final step – the highest on renunciation’s path’.” (143–145)

So, we have to question ourselves:

“Can there be bliss when all that lives must suffer? Shalt thou be saved and hear the whole world cry?” (307)

How do we respond to these questions? Will we be like the Srâvaka? Do we also “thirst for Wisdom”?

If so, then choose thy way, o weaver of thy freedom . . . but only to wed woe and to remain unselfish to the endless end.

Dhyâna: the state of meditation of which there are four degrees. (VofS, Glossary to Part III)

Nirvâna: freedom from the trammels of “mâyâ” or illusion seems to me an appropriate explanation in this context.

Pâramitâs: the six transcendental virtues; for the priests there are ten. (VofS, Glossary to Part III).

Prajñâ: A synonym of Mahat, the Universal Mind. The capacity for perception. (Theosophical Glossary)

Srâvaka: a listener, or student who attends to the religious instruction. From the root sru. When from theory they go into practice or performance of asceticism, they become ªramanas, “exercisers” from srama, action. (VofS, Glossary to Part III)

Yâna – vehicle: thus Mahâyâna is the “Great Vehicle” and Hinayâna, the “Lesser Vehicle”, the names for two schools of religious and philosophical learning in Northern Buddhism. (VofS, Glossary to Part III).

We have 55 guests and no members online