THEOSOPHIA A Living Philosophy For Humanity 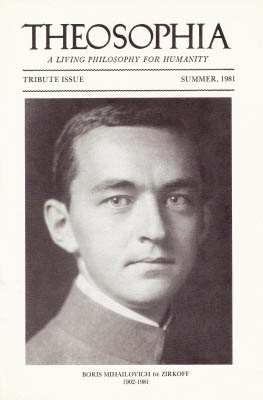 [This unique piece appeared in the Tribute issue of Theosophia, after Boris had passed away on March 4, 1981]

Those of us who were fortunate to have had the experience of knowing Boris as a friend and a teacher, will forever remember him affectionately for his friendship and legacy in making H.P.B.’s writings accessible to us. Most of us who had contact with Boris, and those students who knew him only through the Collected Writings, have only a vague awareness of the magnitude of Boris de Zirkoff’s life-long commitment. However with the passage of time, dear fellow-students, we can take solace in the fact that the influence of his effort, caring and dedication will touch the yet unborn generations of truth-seekers. 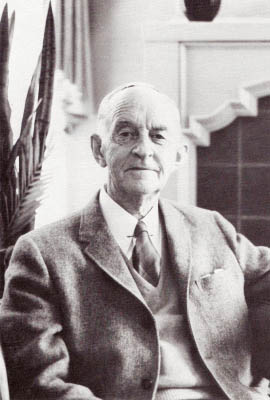 Having known Boris for almost a third of a century as a gentle and modest soul, I can surmise he would vigorously disclaim such an accolade. He would say that the credit for his work belongs to the torch-bearers and helping hands that turned in his direction ... Boris with his subtle sense of humor would have appreciated a “roast” instead of a eulogy. We will accord him his say through excerpts of a lecture he delivered to a study-group of students some years ago. This lecture, you might say, was the summing-up of the theme underlying many study group sessions that had occurred during a period of over thirty years. Let us recreate this Saturday night lecture of yesteryear in our minds. Picture if you will that you are sitting in someone’s living room with some 25 other students and Boris is waiting to speak in his usual calm and measured fashion:

“Friends, in thinking over our various meetings that have been held here and elsewhere ... putting the whole thing into one picture with its various ramifications and aspects, there is one thought that emerges out of it, a thought against the background of what we know of the principles and foundations and methods of occult work ... and it is this ... that at no time can we as students of these teachings consider ourselves fighting a very lonely battle or being left out or having no companionship and being all alone. At no time can we say that nobody cares ... the very opposite is true ... I think that it would be quite correct, quite factual, to make a generalization here and to think that everyone of us, no matter what his age, who has had an association with a' group studying the ancient teachings ... or every one of us who has studied them by himself alone without any association of other people, has planted his or her feet as it were upon a certain path and has registered a certain intensity of interest. .. They not only have actually done something to forward these thoughts ... to spread them ... to help somebody else with them ... all these men and women have registered or recorded as it were, their names, in the sense of their individuality in a certain, shall we say, a mystic ledger. Let us say a book not of a material kind, wherein a place is inscribed, under the operation of certain laws and has attracted the attention of Those behind the scenes who are especially interested in people young and old whose spiritual interests lie in this direction.” The students who have remained interested with some persistent intensity “have unquestionably ... made a mark upon that mystic screen. Those who behind the scenes, behind the veil of the visible, are interested in such matters and have an eye to them ... They are bound to have an interest in them, in our souls because we have an interest in the spiritual laws of nature and have made at least some faltering steps along the path of self-improvement and spiritual knowledge. Some of us, have advanced a little more than others but all have advanced some! We are not alone in that game. We are not alone in that effort ... We can say we are left to ourselves entirely ... We are not! Every time we make an effort in the right direction there is an unseen but sometimes very strongly felt assistance and help that comes. It does not necessarily come at all times just from within our own higher nature, it comes from there of course-but it is also seconded, supported, by the help of those higher Individuals. Individuals, who irrespective of distance and place, feel a certain degree of gratitude for the fact that we are interested and that we are willing at times to do our small bit to add to the work of others in the same general spiritual direction. This invisible help and watchfulness on the part of these higher Entities ... should not be misunderstood by anybody with psychic inclinations to be some kind of a semi-spiritualistic audience of invisible spooks watching us. It is nothing of the kind!!! I have in mind living Men ... living individuals far ahead of us but Whose business it is in the Hierarchy of this Globe, to help along Inner lines aspiring students irrespective of distance and location, because They have become independent of such things as time and space. They care very much about our ultimate spiritual triumph over ourselves ... our lesser selves and about our being victorious and successful in spiritual growth because that means new allies ... new helpers ... new supporters strong and faithful in a very, very ancient cause ... a cause of Human spiritual liberation ... By making a greater effort than we do along the lines of self-purification, detachment from worldly ambitions and entanglements (which have their place but ... less place in our lives than in the lives of others), we can increase that inner relation with the assisting Powers which are living Men, by registering within ourselves a steadily increasing degree of self-control, also a steadily increasing degree of selflessness ... because the whole thing seems to hinge on selflessness ...

We as learners can and must realize that we do have that unseen guidance, that we can never be deserted, that no one of the Higher Ones can ever desert us, but that we can desert Them anytime by failing; and failing to get up and try again.

We can desert Them ... oh yes, anytime, but They won't desert us and that is the main thing. And if we keep in mind this companionship of a mystic kind which is a reality that can be increased daily ... hourly, we begin to feel less and less lonely in our inner self, however much loneliness we may experience at times in our relatively weak and faltering personality. That will feel lonely many times ... In higher stages than ours as well, the loneliness that we cannot overcome of the person, subsides. To the extent that our self-lessness increases and our personality becomes controlled by the higher individuality within us, to that extent even our lower loneliness is gradually transmuted.”

Boris concludes his lecture by summing up: that the gradual spiritual transmutation results in “a sense of joy and participation in a tremendous Cosmic scheme which has neither beginning or end ... and has that ultimate objective of the Spiritual liberation of all that lives.” Yes, Boris, thanks to your effort and help, if we make good use of the roadmap you outlined we will learn that WE ARE NOT ALONE!!

We have 395 guests and no members online